In the last post my adventurers had reached the Knights island and was trying to complete several tests that would prove us worthy of getting the orb. We completed the tests successfully and was finally given the orb. With the orb secured we returned to the Ice caves and the altar. There the Ancient One spoke to us and said that in order to defeat Malifon we must bind him with a certain spell. But in order to reach his place we first had to uncurse three places in his domain because every move would otherwise cause incredible damage for every step. For that we was given an uncurse spell.

I let my wizard Merrilon be bestowed by godly powers and was given the God Runes together with an increase in spellpoints so I now had 200. The voice also said we should seek out the ancient city of Asaht which is the city of the Ancient One. We immediately set course for the Ancient city as our first place before tackling Malifon. I needed new provisions and repairing of my ship. The problem now was that every other temple in the world was destroyed. Not that I had much use of them anyway but I feared the coming of the Demon's Winter which I've heard about and so I felt I couldn´t loose more time.

When we entered the city of Asaht it turned it hosted a church of the Ancient One. I figured I should convert to that religion, but I didn´t know really why since I have not understood the effects of the religious system in the world so far. Naturally I let Merrilon convert but he hadn´t enough intellect points. Argh...I didn´t even know it was needed. I let my Ranger convert because I was worried I had to convert someone to that faith. And why not ? Every other religion was now destroyed so what could I loose ? I was afraid that letting my Ranger convert to the religion would not let the wizard be granted the God´s runes. Because the voice in the Ice caves said it would cost 100 spell points to cast a single spell. No one in my group had so much points and I was afraid I´ve just let the Ranger got the runes but my wizard with the spellpoints. Fortunately I was wrong and it seemed my Wizard got the runes already in the ice  caves and not after having visited the city of Asaht.

My wizard also gained a few extra levels (much needed). We resupplied and also found Spirit Runes to give to my Paladin further in the north. A much needed improvment since I lacked all possibilities of healing for my group.

Before we went for the volcano island, I knew there was another island in the eastern part of the map that I wanted to explore so we set sail there. We stumbled into an old womans hut which offered us to sleep. I turned her down and she whispered a blessing for the Ancient Ones. So after awhile we slept there but was awoken in the middle of the night.

We left the hut and found a new area in the mountainious region containing some sort of dungeon. The dungeon had some sort of ringing bell and we rang in the bell. The effect was not obvious. We left the dungeon and searched around and found a bridge where som giants guarded a ship. They attacked and we slew them.

The fights in this area was much tougher. There is much variation in the quantity of foes in the random encountes. Meeting a group of 14th level wizards and 14th level fighters are not that fun because you never know what nasty spells they could use against you. You have to fight every 20-30 step or so and must preserve the strength for the really important fights. You must also be strong enough to get back to your ship and survive the long voyage to a friendly harbour. So my tactic was mostly to flee from the fights to preserve my strength. Only when the enemies was to near or relatively weak, would I fight them.

Anyway, we took the boat we found and sailed south and went through an entrance that led to some sort of huge cathedral or temple. An evil one that is. A voice demanded us to say the name of the one having access to the temple. We tried Jesric and that worked.

The search of this comples led us to the Crystal room where a crystal ball spoke the voice of the Ancient One and said we where doing well. Hurrah! At last some credits for our efforts of saving the world and a sign of we being on the right track. 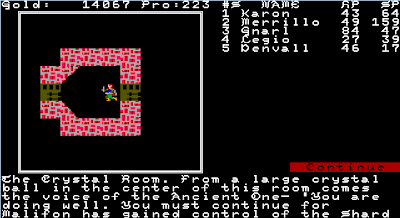 After a while we came to the inner temple. We had to show the amulet from Jesric to be able to pass and met another evil minion of Malifon a guy named Eregore. When we entered his room he mocked us and let his minions attack us. We disposed of them and then he got some respect for us and wanted us to advance forward, which we did. 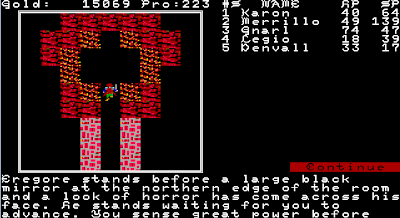 Now came a special moment in the game where you got several full screen texts of the dialogue that transpired between us and Eregore. He had contact with Malifur through a black mirror and was shocked to hear that Malifur had got hold of the Shard of Spring which meant he could destory the world. It now occurred to Eregore that he would perish as well and so he finally killed himself. This was quite and interesting encounter. Malifur mocked us and destroyed the shard so the whole earth shoke. We left the temple and was back outside again, only this time the Demon's winter had arrived. Everything was covered in snow and cold. Every city was destroyed.

I got a little panicked. How would I be able to heal my self, repair my ship, get new provisions and gain levels ? I was quite weak after my trip down to this temple and in no way would my provisions last the rest of the game. What if I didn´t have any hunter skill with me ? I sailed past several ruined cities but I thought that perhaps the holy city of the Ancient One would not be destroyed. And it wasn´t! I was so glad because in there was healers, train guilds and pubs where you could buy supplies and repair the ship. I naturally saved the game.

My group was now at level 9 and money was stable but I was still not able to find anything special to buy. Besides, magical items costs a lot. At least 5.000 gold crowns for a normal magic weapon if you can find it. Our next target was to get to Malifors domain. Perhaps next post will be the final one. It depends how much and how hard it will be.

Oh, and before I forget it. It is very important which races you begin the game with. The dwarf have night vision. I don´t know how the game would have been without one. Would it be complete darkness at night ? Do I have to light torches or use magic all the time ?

The elves have sense magic which means that sometimes when you find items you get a text saying some magic aura is detected. I never understood it was the elf's skill that detected that until later in the game but I believe it is very crucial IF - and only IF that is successfull on every magical item found and not only from time to time. To identify something is expensive (75 gold).
Upplagd av Saintus kl. 10:39 PM