By conicidence I watched a video of Black Crypt on youtube just on the same place at level 3 where I got stuck. I then saw that he put the mask of true sight as a helm on one of his characters. I just put my mask in the left hand of the person wearing it to be able to see the invisible monsters. But it turns out that without the mask weared on the head the monsters become invincible. That was my problem. But when I switched the mask to the head I begun dealing damage to them.

This is a bug because you are lead to believe the mask works since it reveals the monsters as long as you put it in your hands. How should I know I won´t be able to damage them unless I wear it as a helmet ? Anyway, now I have a good reason to continue my play with Black Crypt. Except for the fact that I am totally hooked by Inquisitor. A really good game which I have put over 15 hours into so far and it is a huge game. Then in february 14th Eschalon III will arrive.
Upplagd av Saintus kl. 6:40 PM 6 comments:

Just before closing the year 2013 I just reached 90.000 pageviews to this blog. Now 2014 is here and with that another gaming year of this blog lies ahead. Since I got stuck in Black Crypt at level 3, unable to inflict damage to the unseen ones even though I wore the mask, I have decided to move on. 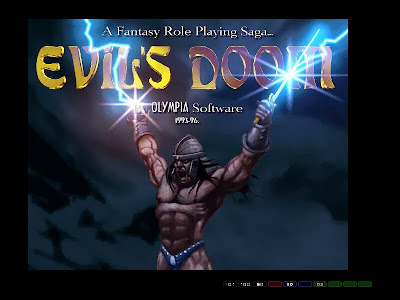 One of the games I have tried out a few hours lately is the Amiga game Evils Doom that where released after the demise of Commodore. It is done as a pure AGA game (ie 256 colors at least) and with a lot of hi-res modes. It has very good resolution for being an Amiga title and is unique in that way. The problem with the game was that it never really hooked me. It has great potential but the gloomy and dark graphics combined with the unintuitive userinterface put me off for now. Perhaps I will return later on. 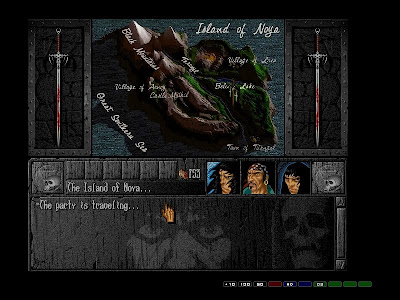 So after I had quit Evils Doom I had trouble finding anything to play that I was interested in. Sure, I have Rome 2 Total War to play around with but that is the kind of game you never finish. I wan´t a true RPG to play from start to finish. I had to check out the offers made available on www.gog.com and then found two games I eventually decided to try out.

The first one was called Kult: Heretic Kingdoms and is an old Diablo-clone with some unique features of its own. I was told the story would be quite good, that the dialogues where good and sarcastic and so on and I bought it and played it for several hours. Pretty soon I discovered it did not offer anything special besides mindless hack´n slash on different maps. No engrossing story, no interesting choice of dialogues. It was very linear like any hack'n slash game. I was quite disappointed because the game seemed praised on the forums. My rating for it is not more than 3 out of 5. It´s ok if you don´t have anything better to do but not something you must have in your collection. So I moved away from it and tried out my other game.

That game was called Inquisitor, originally developed by a Czech team for 10 years and released in 2012 for the PC in an english translated version. The game is played out in a dark, medieval setting very much like the european middle ages where you have been sent by the church as an inquisitor to find out the truth about a strange murder in a far-off rural town. The country is shaken by natural disasters and plagues, the times are very dire indeed. It is in that environment you pick a starting class between a Paladin, Priest or Thief. To fit in perfectly in the setting I choose a priest, the only one to attain the highest spells in all different magical schools. 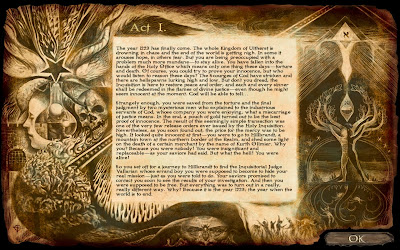 You start out in the small town of Hillbrandt to see the high priest for more instructions of what to do. Your main objective to getting to the town is to investigate the brutal murder of an merchant. This part of the game turns out into an investigation when you ask the people of the town - from the common blacksmith to the duke himself - about what they know. At the same time you learn about the terrifying things this town has had to endure lately with the mountain that seems to have let loose all hell against the population, the mine that have been overrun by orcs and trolls that slays all wanderers. All hell has broken loose to say the least. 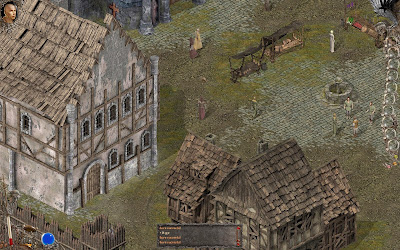 You need to find evidence of who of the ones you suspect are heretics and present them to the church to gain an arrest order for them. I haven´t got so far yet but I have evidence gathered against a high placed - seemingly good - person. Not for the murder of the merchant, that is merely my own objective to have been sent to the town, but to help out the high priest himself in this small town. The automatic log soon fills up with interesting and important information that you discover and you get many minor side-quests along the way.

The game has been called old-school because of its high difficulty. It is unforgiving and don´t tell you what to do or where to go. It also contains a lot of texts and dialogues. I was first dubious about that when reviewers compared it with Planescape Torment (a game I never really liked) but I have found Inquisitor to balance this very well. There are no humour at all in this game. The world is dark and evil. Satan is loose. People are loosing hope. As a horror movie fan, I love that. 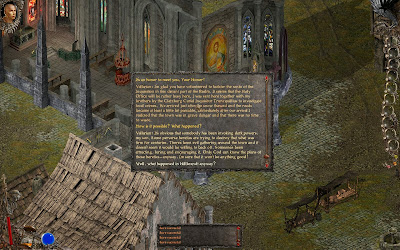 You have to keep track yourself of where certain persons are that you need to talk to or return to later on in the game when you have got more information. You could leave the town in the start and have several places to go to like the towns cemetary, the towns execution place, the mines or other places you uncover while talking to the inhabitants. All texts are in written text. There is no vocals. Personally I prefer that because I often find myself impatient in listening to vocal voices.

Combat and equipment wise it is very like the first Diablo. There are a lot of items and they could have any sort of magical enchantments. You have not much gold in the beginning and you need a lot of gold to get good equipment, repair broken equipment and to buy a lot of mana, health and stamina potions. The combat relies on you having huge stocks of potions with you in order to survive. As a priest I have only a bow and relies on precharge magical items since my spells are too weak at this stage. Fortunately after a few hours into the game I got my first companion - a dog - that helps me out in combats pretty well. 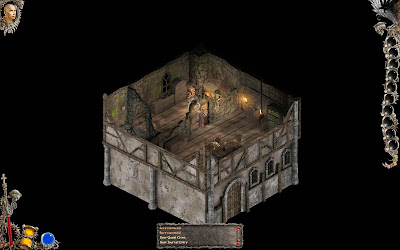 You have dozens of skills to put skill points in that you get when raising an level. You then get four attribute points and four skill points. Every skill is divided into different master levels. To reach the first master level you have to get to skill level 6 for example. That could enable you to use better spells or equipment. Every class in the game has its own unique skill set apart from the common ones that all share. It feels like you really could have a lot of character builds here. You could also gain companions later on. I have a dog now and another NPC. You could give them simple commands and they could use potions from you freely if you allow that.

Since I read combat is very hard and tedious even at normal level and required a lot of patience to progress (something which requires time that I don´t have), I decided to play on the easy level. But this easy is at least normal in most other games because I cannot say it is easy at all. There are many places I am just too weak to tackle right now and I have played for 10 hours and reached level 13 with my priest. Sure, I have saved most of my attribute and skill points to use them only when I really need them but it is still not easy.

The thing is that while you gain levels you have no idea in which skills you should put them since there are quite many to choose from. Increasing skills will gradually costs more skill points and you cannot reverse you choices. I like that but it also forces you to be careful where you put them. I have so far only increased my perception skill since I have discovered that my priest notices several hidden stashes with it. I have also increased one of my four magic schools to level 5 in order to use the spell Word of an Angel on them. I am waiting to reach level 16 in which the second tier of spells will be available to me. Then I can put all my saved skill points into the magic school I find most useful. There are a lot of interesting spells in the game. 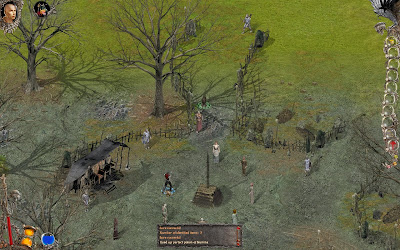 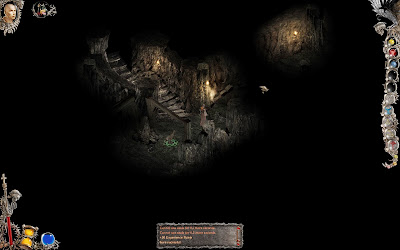 There are several places in which you will travel underground as well. You have to proceed carefully because traps, hidden treasures and hard to see levers could be found here and there which could prevent you from proceeding. Even though Inquisitor is a hack´n slash game in the bottom it is surrounded with a solid story with interesting twists and dialogues, an unforgiving and hard combat system that really makes you feel accomplishment when you raise a level, completes a mission or even survives the encounters. The dialogues are one way only. Once you choose an answer you´ve made your choice. There is no going back to try out other options. At several places it is not obvious what is the right thing to do. I love those options.

I strongly recommend this game to anyone wanting an action oriented RPG in old-style mode. The graphics are good and the music and sound is well fitting the settings of the game. This game costs 8 dollars or so at www.gog.com and is well worth it. I have totally dropped Kult: Heretic Kingdoms in favour of this game.