Request for good indie RPGs out there

The playing time I have today is focused almost entirely on old classical CRPGs as could be seen here on this blog. I am not even up to date of which modern releases are around the corner. I just read today that Dragon Age 3 are on the way but that information could be several months old already. Also Legend of Grimrock 2 is on the way. That information is already over 2 months old.

Anyway, in June I will have more time on my hand and plans to play Dragon Age 2 and continuning with this blog.

However, I was writing this to get information of other good indie RPGs out there worth trying. Preferably in the same style like the games released from Basilisk Games, Spiderweb Software and Almost Human. I hate RPGs with manga style or cartoon like graphics so these are no alternatives for me. But I am always looking for traditional single or partybased RPGs that might be available.

Anyone have anything to recommend ?
Upplagd av Saintus kl. 11:02 PM 28 comments:

Betrayal at Krondor - The story unfolds

A few hours later I have gradually immersed myself in this game. I have discovered new things in the game that slowly improve my game experience. More of that later.

Our goal is to reach the capital Krondor in the south. What stops us is constant ambushes and attacks from groups - often of the race Moredhel - that don´t wan´t us to succeed. I am not entirely sure of why but that´s the facts right now.


While continuing to Krondor using the western route along the coast I found a few interesting places, among them the first temple in the game. The temple is very important because not only could you bless items (which is way too expensive for me right now) but also heal or cure ailments like poisoning. They also offer the possibility of teleportation between other found temples but that requires a certain gift of gold which makes it pretty expensive.

I have to return to comment the ingame 3D-world graphics in this game is actually pretty poor even for a game from 1993 and the landscape looks the same wherever you go. Even the towns are quite pathetically drawn with a few buildings. See below.


There are hills, mountains and trees the rest is either the brown mainroad or the grey minor paths that could lead to chests or small farms. If you are lucky you could find graves or boxes but other than that you don´t see anything in the 3D World. You might see shady nonmoving figures representing some sort of encounter but most just happens with a story text attached. I have no problem with that though.  Events are triggered based on where you go and you cannot foresee if anything special will happen at any place. To secure that I won´t miss anything vital I often travel by the mainroad but makes detours along the sides as well.

It was just such a trip I was undertaking when I thought it wasn´t very long until I was reaching Krondor. Then I thought that I might perhaps use the chance to explore the alternative way to reach Krondor using the eastern path. There was a few towns along that route and who knows what adventure might be hidden there?

I returned back to cross the mountain to the east and began to explore the whole northern and southern parts. It took me several hours and here are a few things that happened or refelections that I made in the game during that time: 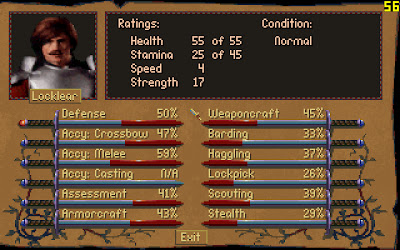 The tactical map while fighting give little room for any sort of deployment. You have at best, one round you can use your ranged weapon before the enemies are upon you. They are mostly effective by shooting at retreating opponents. Yes, enemies could retreat from battle and according to the manual all opponents use different tactics and by killing the leader early on the rest will more likely flee. I have yet to confirm this though.


I hate the places where traps are spun from the ground to halt my movement such as this one.


These are stationary traps you have to navigate through in the combat mode. The ball spheres shoots electricity bolts at you while crossing between them doing around 100 points of damage which is enough to kill anyone in my Group. The other strange symbols either shoots some sort of fireball or whatever but they are as dangerous. It is enough to get past with only one person alive to the other side while letting the rest wait. Hopefully you have a chest or something behind this which makes it worthwhile.

After some struggles we finally reached Krondor. The city gave us the opportunity to visit two different shops (one concentrated on weapons/armour and the other in gems and special items) and an inn apart from going directly to the Palace.  I checked all other places first and then we entered the Palace. It was not possible to get through though. The main gates had problems with the lock mechanism of the portcullis and neiter Prince Arutha or James (another familiar to Locklear) was available.

It was then Locklear remembered he knew of another way into the castle through the sewers which Jimmy the hand once showed him. So down to the sewers we went.

The sewers revealed to be larger than the dwarven complex. Apart from several thieves and robbers we found several ladders leading up to grates that we had no way of unlocking. I searched for a way through the complex and stumbled into nighthawks - black assassins that had my old friend James (Jimmy the hand) cornered.
We saved him and he was more than willing to give us the key to reach the Palace. The question was only which of all the ladders we´ve found would be the right one. We looked through all previously found ladders and tried the key on them with no success. Then I remembered I´ve found two shafts I couldn´t cross. I returned there and clicked on the other side.

It gave me the opportunity to swing us over by the use of our rope. One lead to a quick dead end but the other one led to a ladder I´ve had not tested yet and it was of course the one to which the key matched.
Now the game turned to a rather long exchange of screens and texts to tell the following:

After some pleasantries exchanged with prince Arutha and magician Pug we told them of our follower Gorath the moredhel. Just when he was about to reveal his face an assassin stepped forward to try to kill him with an arrow. Pug quickly sent a bolt killing both the assassin and destroyed the arrow inflight and the situation was saved. This showed how important our mission to reach Krondor was. 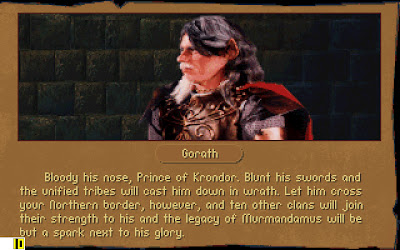 Gorath begun to speak of what he knew and the court magicians pried his mind as well. To summarize, a general called Delekhan - one of Murmandamus field generals - had taken over as leader of the moredhel and was marching with them to the borders of the northern kingdom. Why or where he was bound is not clear and Prince Arutha showed great irritation of not knowing how to best deploy his forces and if he could trust this Gorath at all. However, Gorath said that he might be able to learn of Delekhans intention by using his communication logistics in the Town of Romney. With the help of James, they both set out for the city of Romney located in the Eastern part of the kingdom. 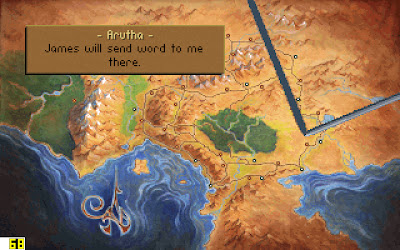 I was suddenly back at the Palace. Locklear was needed by Prince Arutha elsewhere so he had left the Group. Owyn was nowhere to be seen. Locklears belongings was accessible though and I transfered everything of value to James and then we returned to the sewers since our mission was secret. It was there I thought I might reload so that we could take the best items from Owyn as well before chapter two started. I tried this a few times until I discovered that Owyn actually appears further on in the sewers and will join the Group again. All this meddling for nothing! 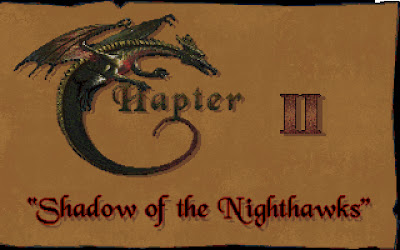 Anyway, after a while we where three again and Locklear was replaced by James. But I gave Locklears' two handed weapon to James instead. Gorath kept his blessed Lampley sword and Owyn his ordinary staff. Before leaving the Palace I sold some gems found in the sewers and was able to use all my money to get a Keshian blade that according to the specifications should do a lot more damage. Now we where all prepared and left Krondor for our new challenges that awaited us.

I am still as positive of this game as in my former post. Now we have a more specific mission. To reach the inn at Romney and see what we can learn about Delekhans plans.