Stonekeep - The mines and the Throggi Temple

I am still playing Stonekeep even though it is over a month since my first post. I have now become more used to the clumsy interface and begun to understand more about using different objects. For example, early on I found the Thera orb. If you put it in front of you on the ground it gives you a small map of the current area and reveals any invisible doors. Because the inventory is so clumsy I only use this on special spots on the map where I suspect I might have missed something. I don´t remember that I even discovered the use of this orb on my first playthrough in 1995. There is also another orb I found that heals you but it has limited amount of uses. I don´t know if it regenerates over time. You have access to an automap in the game where you can put your notes so there is no need to draw any maps.

Anyway my progress has taken me through the sewers. First I had to explore them when they where flooded. Then I had to drain them with cylinders that I found down there. After that I needed to explore them again in search of hidden objects and to find the invisible walls that lead me on.

After the sewers I came to the Sharga Mines, filled with the goblinoid creatures called Sharga in this game. Those levels was quite interesting to explore. Smaller and larger Shargas and a huge two-headed giant was among its inhabitants. I had become dependent of the few healing fountains there was but it was tedious to run back and forth after almost every fight. I needed to save the healing roots I got from the slained Shargas when I really needed them. Somewhere around here I found my first magical wand and runes. I found a fireball rune and a healing rune and also a magical circle that replenished the mana in the staff. With its use I could prolong my expeditions and became dependent of the mana circle instead of the healing fountain. Later on I would find more powerful staffs which had more mana and for a while I only used the fireballs in combat.


Eventually I would find other NPC:s. Farlis brother and others and when I was in the temple of Throggi I had at least three NPC:s. You cannot control them, you cannot see their stats or inventory but you could change their weapons and armour but since you don´t see the effect of it, it is hard to know if you actually improve them or not by re-equipping them. They seem to add somewhat to the fights but since you never see the enemys health it is impossible to judge if their hits is as powerful as yours. The good thing is that if they die you could always heal them with the staff.

At this stage, I encountered several traps and progress required finding invisible passageways or hidden objects. Still the reward of opening new chests or finding special items is great but the enemies becomes tougher as well. At one time I only used ranged weapons like a crossbow. They inflict heavy damage and you can shoot them through doors where enemies normally don´t follow you. At least not if you found them on the other side in the first place. After each fight you have to pick up all your arrows or darts once again. This takes time and makes progress slow. 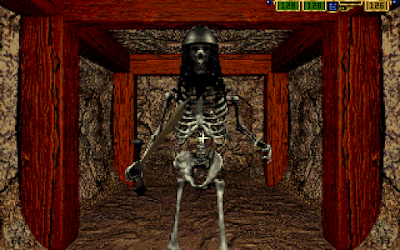 In the temple of Throggi - my last level - I met shamans that used magic at me for the first time. I mainly used fireballs against them and when my mana was out I attacked them in melee. The guards on this level had a special ability of putting up their shields to protect them from ranged attacks so I only used magical attacks against them.

I am sure I have missed several hidden places or items but as long as I can progress I am satisfied. The opposition is tough but balanced. It never feels too hard and never too easy. As long as I have access to my mana circles I feel safe. If an enemy is too tough you can run away, heal up and then come back to fight him. I think he has not regenerated any health. There is very little in the form of writing or story. At some places you have plaques to read before certain rooms telling you it is a storeroom or whatever. Other than that the only interesting story is when you meet monsters who speak to you with digitized voices. 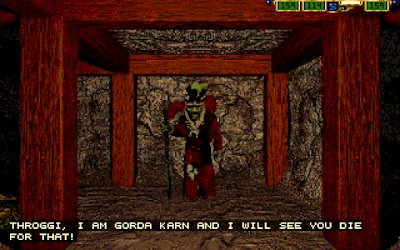 Due to some sort of bug I never saw Wahooka and could never give him any precious stones to get hints until somewhere in the Sharga mines. But his advice was worthless anywayand and since then I haven´t seen him anymore.

My biggest complaint about the game lies in its interface and specifically the inventory which consists of a scrollable pergament on the right side of the screen. By slowly scrolling it up or down you can find your items. It takes a lot of time and often you have to shift weapons so this is tedious. At some parts the passage is caved in and you need a pick to remove it. Such moments only add to the frustration of the game. Another thing is that no items is presented with name only by graphics and it is not easy to see what it is. The only way to know what you have found for certain is to use your journal which lists all items found.

But apart from the slow interface in general I find the game entertaining and rewarding so far. I still think the game holds pretty well against the competition at the time like Anvil of Dawn or Dungeon Master 2. But more of that later on.