I created this blog to be able to revisit classical CRPGs. Right now I am halfway through Drakensang - River of Time and have to finish that game before starting my new blog with serious efforts.

I have always wanted to try out Demon's Winter from SSI. It seems it was originally released for the Apple II and came 1988 to Commodore 64 and IBM PC. In 1989 it was released to the Amiga platform. It is obvious by the graphics that the game was ported without any use of the capabilities of the Amiga. But the sound is even less used with the occasional blip-blop.

However, as you all know the graphics and sound in CRPGS is not primarily what made them so immersive and entertaining. It is the feeling and depth and the always present character building and leveling, the exploration of the unknown and the hope that somewhere, someplace there lies a chest with that certain magical weapon you need to swing the tide...

Look at the back cover below. There was a certain appealing text that accompanied these games which made you drool over them. Ok, ok, that might be explainable  by my meager age at that time but anyway. 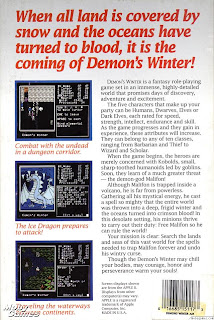 I had it to my Amiga 500 but never understood how the game worked and did not have any manual to go with it (yes, it was long before Internet came to the rescue). I will either try it out with DosBox or with an Amiga Emulator like WinUAE. That depends on how much efforts it takes to get it to work and how much it differs in quality.
I remember the graphics was very bad so I will probably go for the DosBox version.
I loved the SSI brand when it existed. They produced a lot of high quality RPGs and strategy games.
However, having installed WinUAE and downloaded Demons Winter and loaded the game from floppy I quickly started to roll up one character named Rolf just to try out the Amiga version. 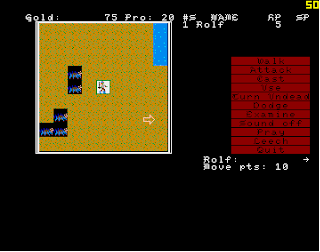 After around 30 steps in the wilderness I met a group of spiders. I am sure the pictures of them will probably pass as giant ants or whatever other creatures there might be out there....


Having found a city I immediately went to the temple only to be met by this holy guy. I was quite astonished about the image compared to how the spiders looked.


I noticed the game loads from the floppy when entering or leaving places. I forgot that delay in the Amiga version so I will try out Demons Winter on DosBox as well before I decide to start upp my new party of adventurers. Below is the same guy in the PC version. Not much difference but the aspect radio and resolution is better in the Amiga version and the Amiga version has mouse support.
In the next post I hope to have created and started up with my new party. I have to read the manual first though so I get to know the game first. I hate playing games without the proper and complete manual. In those days the manual was what you really payed for when buying the game. Especially so for games from Microsprose. But that is out of the scope for this session since they did not do any RPGs (if not counting Darklands that is).
Upplagd av Saintus kl. 3:20 PM