My quest in Balrum continues in this great game. After much searching I finally found the troll that guarded the final rune. What I like about this game is that you most of the time don´t have to kill your foes in order to proceed in the main quest. And you don´t have to kill monsters in order to gain experience points either since you get very little. Grinding in this game is not an option. Now, I don´t remember if I actually killed the troll or managed to sneak past it using my favourite speed potion tactic: Run past the troll to the chest, open the chest take the rune and then get the hell out of there. But on the other hand there are some bosses that could give you valuable magical items or even a level point. You won´t know if you don´t kill them right ? That makes for a good compromise in my opinion.

Before I left for the portal to the undercity with my three runes I maked sure I had visited all places and dungeons. Most of those I could manage to clear out or at least explore. There is no need to spend a lot of mana, health and potions just to kill off a few beasts which don´t give you anything in return. Potions requires plants and even though plants grow everywhere it gets tiresome to always pick up plants for new potions. You could also buy potions and I frequently do that in exchange for selling off stuff I have gathered.

There are a lot of different places in the game not related to the mainquest. Some of them contains puzzles. They are for the most part quite easily overcome and adds to your feeling of accomplishment. I had to leave a few places where I could not understand how to progress though but nothing that relates to my mainquest as far as I know.

I have still been very conservative of spending my level points and have constantly 10-13 points unspent. I need to increase my strength in order to wield better melee weapons but at the same time I also need to increase my intelligence to wear better magical items and get more mana and increase my wisdom to boost my mana generation. Many of these attribute increases could be gained from magical items but it is your core attribute that decides if you could use a certain item. I still want to play as a pure mage but it is not practical to do that without investing into strength. When your mana is emptied you need to rely on melee and wield enough armour to take on the tougher beasts. I love these kind of decisions for your character build and see much value in replayability of building different character classes. 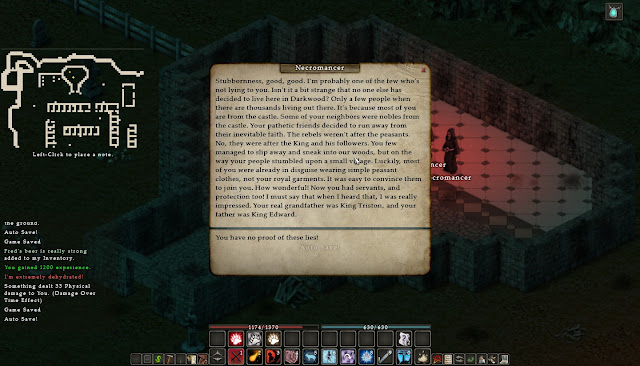 Ok, I went down into the undercity and explored everything. I tried to avoid every fight I could so as to preserve my stock of potions until I really needed them. The undercity is really an abandoned city in itself. In the church I found the necromancers I have heard so much about. They told me I needed to get three items to restore their strength which are spread across the world by former people. If I don´t help out they will destroy as much as possible of all I love and care about. I also discovered I am an heir to the king and as such is the only one that can actually use these items. 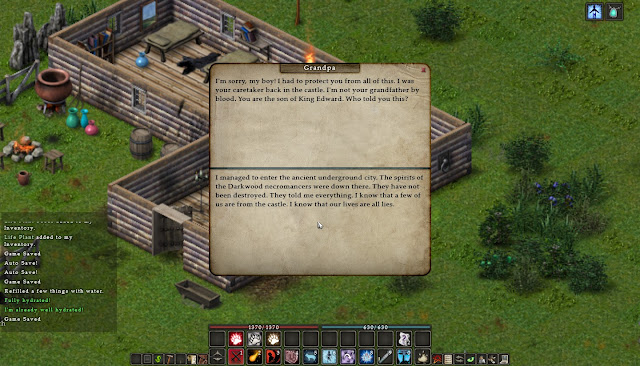 After finally having received what I believe to be the real mainquest I return to the lands above and when I revealed what I have learned I was told that the only one who might know about the items I was looking for was the mage guild. But to reach the guild I have to leavy the forest and travel to the other sida.

I entered a trapdoor and travelled through and underground tunnel. Here I was challenged by tougher creatures already but I choosed to use my speed potion to get past them and got out on the other side and entered a glade. It was full of new beasts and tough monsters that randomly moved around. I had no interest to fight them so I sneaked past them and managed to reach the other side which loaded up a full new huge map area divided into four sections just as the starting place. No I had finally reached my goal and begun to explore it.

After a few minutes I found a new settlement. It was a huge one. Once it belonged to farmers and townspeople but now the rebels had taken over. I searched every house and talked to every person. Not all were happy about the rebels. I replenished my inventory and kept track of new skill trainers. Some of the sidequests were interesting such as the highpriest worrying about his employees nightly endavours to a nearby brothel. In the end it turned out that not only was there an underground tunnel connecting the two buildings but the highpriest himself was the most frequent visitor. By using blackmail I could get some benefits. 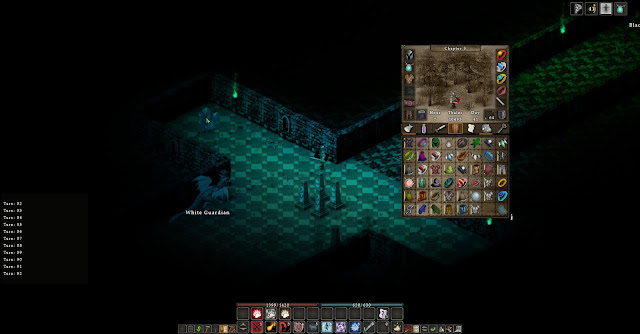 I found a skill trainer for level 3 hunting and was excited. At last I could improve my pet by taming a mantis or spider. I saved before spending my level points and tamed both a mantis and a spider. But I was dissappointed. First, the indicated strength, health and level they have before you tame them has nothing to do with their actual strength when you get them as pets. They had even lesser amount of healt than my bear. Just a different setup of attributes and other pet abilities. Nothing that would make me want to expend 3 level points on that skill right now. I reloaded. Now I would like to know if level 4 hunting will be worth it.

My quest was to get to the mage guild so after a few hours in the village I decided to move on. The mage guild lies in the southwest corner of the 2*2 map and I eventually got to the mage guild by avoiding all threats. There are a lot of new, powerful creatures here and I see no reason to fight them for the meagre amount of XP they give and have to deplete my stocks.

To actually reach the guild I had to complete some puzzles and then I first got a mission from them to assure them I would be qualified to enter. I would have to get a certain object from the undead lands in the southwest. I immediately set out for that part and this turned into a positive experience. I got to a huge landare covered with dead trees and full of mythological beasts and undead creatures. I run past all of them - often with my speed potion active so I could run from them when they discovered me. I searched everything I could and this place was filled with interesting places that yielded a lot of magical items. I eventually found what I was looking for (without a fight) and also met a mage there who I helped to get his lost zombified servant back home again.


When I returned to the mages guild I was accepted but in order to actually help me out with my quest I had to get recommendations from all the mages so I had to do errands for a few of them. I used this time to increase my arcane level to 3 and bought all new spells I could get. Here I also increased my level to 6 and put that into strength to be able to use better armour and melee weapon. I still have over 10 level points unspent and I am thinking into investing them into intelligence and wisdom because I need to increase my magical abilities.

Now it is time for me again to return back to my main quest....