Demon's Winter - With a purpose

My group are now in level 8. I have travelled around the sea visiting some islands to the far east. I found a spring that healed all of my characters on an otherwhise empty island. A little more east of that island there was an entrance to some tunnels but they quickly got to hard for me to continue so I returned to the mainland to have my ship repaired and wondered what to do next.

It was then I decided to go for the hidden city of Qoorik. When planning such expeditions you must be sure your ship is in good shape and that you have a lot of provisions. I went to the town of Idlewood to use as a base, my ship anchored nearly. The problem with Idlweood is that there are no healers in town which means I have to take my ship to another town - and risk it being destroyed at the sea. This will be challenging I thought.

As I ventured below I hade to begin mapping seriously on draw paper. The levels was quite huge. My explorations took me through some underground mansion and with some small puzzles here and there. Mostly to reveal hidden doors that led to some clue.

Finally I discovered some sort of smithy with a grinning troll that offered me a weapon to destroy Xeres. I took it and thought to have it identified. Why the troll so eagerly worked on such an item I wonder....Perhaps the living conditions underground with Xeres aren´t that good after all ?


I found the battles in the first level to be more easy than to my venture to the Dwarven mines in the northwest. The only thing worth mentioning about them is that you eventually find a Dwarven smithy which can enchant your weapons. But it is so incredible expensive that I don´t think I will ever afford it.

I think I went down four levels in Qoorik. There where some interesting things going on. I found a secret garden with a healing fountain. There where some mazes in the Graveyard you had to get past in order to reach the underground river where the ferryman awaited. He weanted my black coins found earlier in this complex, to take me to the other side. Several times I had to backtrack my way back to Idlewood to sell and identify stuff but mostly to take the ship to Woodhaven so that I could resurrect or unbind my characters. Most of my money was spent on keeping my group healthy.

I have discovered that it is quite easy to flee from a combat (including sea combat). It is well worth doing that when you are travelling deep into complex or need to travel far. You cannot afford to injure your group for random encounters but save them for the real ones to come. For example. I hated Slavers. They had an uncanny ability of summoning elementals from time to time. When they appeared they where probably the toughest opponents I´ve met so far, hitting me almost at every try.

Before entering Xeres personal domain I was warned by a Salamander: 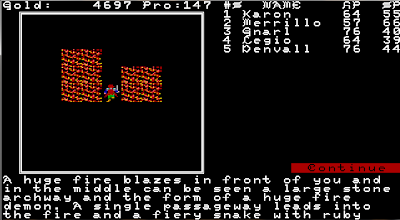 Deep down I found Xeres himself meeting me into a duel at level 4. He was flanked with some salamanders and gargoyels.I struck him down with Merrilons Column of fire. The other minions was quite easy, but not before they killed Legio with a single spell. 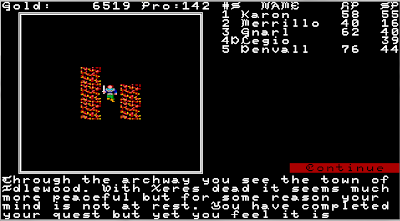 After Xeres death a peacefulness finally entered and Idlewood could be seen in the distance. At least I had accomplished something. But as the Demon said, it will not affect the destruction so I have to find out what to do next.

My plans right now are to heal up, reequip myself and identifying my items. Then I will set out to get fencing, berzerking and armoured skill to the other fighters in my group if I can afford it. After that I will try to navigate to new undiscovered islands and continue the adventure there...
Upplagd av Saintus kl. 8:29 AM