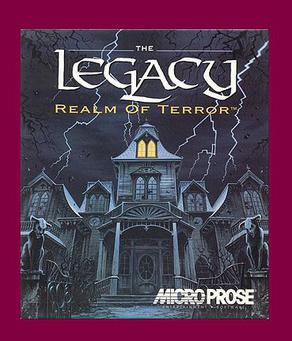 I have come to a halt with my playing of The Legacy. I am not stuck. I have only lost interest into finishing the game. Now in the end where it needs perseverence I have  been charmed by Operencia - The stolen sun. But the important thing is that I have played it enough to give it a fari review I believe.

The gameworld is all confined to the mansion but it is a huge mansion consisting of at least 8 levels. They all differ graphically from each other and offers their own challenges. The story is unfolded through notes and diaries found all over the place. That is actually the main source of informaiton of what has happend and what you should do. I think that part worked pretty well.

There is no economy worth talking about. There are no money and no shops. You are totally dependend on the limited resources you can find in the house. Those limiting resources which could destroy your game if used amply are: First aid kits, energy crystals and ammunition.

There are quite a range of different monsters, horrors and entities in the game. Each level has its own style. From Zombies to ghosts and gargoyles. The variety is quite large and they all have their strengths and weaknesess. Some are good at range attacks and some at melee. Some only frightens you. It is however almost impossible to know if the weapons in the game have different effects on them since you have no damage statistics for them.

Tactics are almost non-existens for the monsters. If you are near enough they will see you and hunt you down. I have never seen any monsters retreat. They always fight to the death.

The combat system in the game is very simple. You just click with not hit-zones or whatever. Your hit-chance is only determined by you skills and not by any practical manouvers. Still the variety of weapons - both melee and ranged - allows for possible different strengths albeit unknown to this author.

You acquire magical spells by finding scrolls which you scribe into your spellbook. You can then cast them while holding the spellbook in your hand. All spells have their own description and skill level. I never bothered to use magic that much. Or rather, I did not have too and I choosed to conserve the few magical crystals I had found until I really needed them. The magical spells sound terrific when you read about them but I don´t know if their practical use is that much different against different foes.

You can choose between several predefined characters in the beginning or customise your own. I choosed one of the predefined ones. Experience is improved by reading notes and explore rooms. Best of all is that you can buy skills immediately with your experience points. The higher the skill the more expensive it costs. Very good and flexible system I must say. There are no levels and thereby no improvments of your character in any other way than you own spending on the skills.

I thought the level design was quite ok. Even though the graphics doesn´t allow for much interior furniture and most rooms looks the same it varies from floor to floor. All the maps are equally large. I don´t remember know if they are 20x20 hexes or so. Perhaps it would be more unpredictable if maps actually varied in size since you will now understand you have missed parts if you only discovers half a level.

The manual consists of some 60+ pages and is really well written. Nothing else is expected from the masters of manuals company Microprose.

The graphics in the game was acceptable in 1992-1993 but it is hard to make it justice in Dosbox on a 24 inch monitor nowadays. It was one of the first games in its generation to use 3d-environements just like Ultima Underworld. The Sound of the game is a bit disappointing. Apart from the mediocre theme music I did not hear any more music I remember during my playing. Just a few soundeffects and even though they sounded sampled I was not that impressed.

The interface is both good and bad. The good thing is that they dried to develop a windows based experience where you can resize the different windows and place them wherever you like. It works pretty good. You could do most things you are used to today like drag´n drop item from the world window to your hands for example. The bad things are that you don´t know how much a skill will cost until you try to uplevel it with you experience points. There is no confirmation, you will have to reload if you are not satisfied. Also you don´t know when your experience level increase since you don´t necessarily see that bar when you explore the mansion. But overall I am satisfied and think they have made a pretty good job.

Gameplay
This gives a final CRPG value of 21. I do recommend this game if you have the patience to solve the puzzles. My advice would be that you make your own maps and write down where every item is because you have so limited carrying capability that you will have to run back and forth with items through all the floors. This is something my patience doesn´t allow for today.

The game comes close to the rating of Anvil of Dawn and Faery Tale 2 which seems like an acceptable place.