InXile recently released Bard´s Tale IV a kickstarter backed successor to the famous Bards Tale series. While it so far has received mixed reviews - where mostly original Bard´s Tale gamers feel the lack of soul from previous games and less character customization - it seems to be a game worth considering after the first patches has been released.

Not as well known is the fact that InXile also released a remastered version of the old Bard´s Tale series trilogy where graphics, UI and other improvements has been made. After having read a little about it and needing a secondary game to play on all the other computers here at home I decided to buy it. 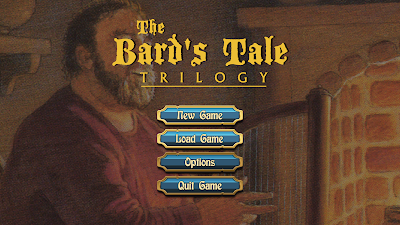 Tha game can be played in almost any resolution and has full mouse support as well as the old keyboard support. The ability to save anywhere and not just in the tavern is a god send improvement. I don´t have the time for running back and forth just to save the game and loosing huge amount of gaming time when I die along the way. Those times are long gone with a family and work to take care of. Except for the saving mechanism the best improvement is the inclusion of an automap. At last!

I loved to map old games before but time has changed so this is a very valuable addition. Some of you might remember my revisit to Bard´s tale 3 several years ago. The main problems I had with it was the extremely slow regeneration of spell points in combination with a ridiculously high random encounter rate. It was extremely frustrating and made me quit the game.

Bard´s Tale opens up with the classic original Bard´s tale tune and with improved graphics that scale very well into high resolutions. There are unfortunately no manual supplied to the game. You have to find it on the web but there are tooltips almost everywhere that describes the most vital parts of the game.

I started out a whole evening with rolling characters. After an hour or so I was finished. In my setup I had one warrior, paladin, rogue, bard, magician and conjurer. You have the typical setup of races like human, elf, orc, gnome, half-orc, dwarf etc but it is not obvious what their exact advantages are.

When my party was finished and I had saved the game we went out to explore Skare Brae. Ahh...it was a fresh breeze that reminded me of my adventures 30 years back with my Commodore-64. It is exactly the same town and I still remembered some things but not all. Fortunately there is now a full featured auto-map included which also describe the things you find, for example labeling what kind of shop or temple you discovered. It writes down all hints and tips you found and so on. Perfect! 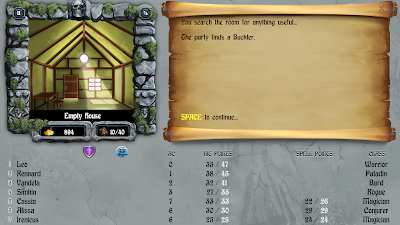 My first goal was to find the equipment shop because we started out with only some gold and no weapons. I had to find the shop through google and it was only around 10 steps northward. After having bought broadswords and scalemail to my warriors I was satisfied. Now begun the first hard part of just surviving. I tried to take on the easy fights to gain experience and get some gold. After half an hour I was eligible to raise to level 2 so we searched for the place where you can level up the characters. I also gradually improved the equipment of my warriors.

What struck me is that the shop only offers standard equipment. Best armour is plate mail and best weapon is the two-handed halberd. There is no magical items or expensive items to long for. I suppose I have to find all of these. 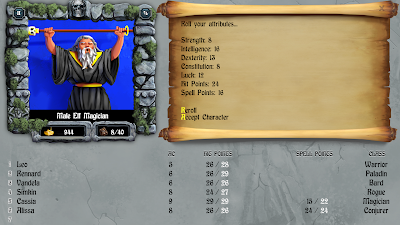 My strategy was to wait until level 3 to enter the sewers. The sewers is entered by ordering some wine "which easily goes down" from a special tavern. It was around this time that I read about how bad the rogue class was. Even if they had improved it by including the improvements made to the class in Bard´s tale III, I was not impressed by its ability to hide in shadows and automatically score a critical hit on next turn for only a few points of damage. At level four I switched out the rogue for another warrior instead. The only drawback I see is that I have to rely to magical means - and spellpoints - to disarm traps. But the successrate of the rogue is not that great in that department either.

I also eventually added a 7th magician instead of using the slot for wandering creatures after having read it was the best way to use that slot.


I have only reached level two in the sewers and explored a little over half the town and already most of my times have been spent on levelling up my characters. At level up every character recieves a random amount of hitpoint, spellpoints and a one point increase in a random attribute as longas you haven´t reach 18 in that. I reload if my numbers are too low. This takes time so at least 10 minutes for one level up I would guess. Anyway everything is so extremely much easier and quicker than on my tapestation on the C-64 so in just a few hours I was already at level 7. Higher levels means extra attacks per round for warriors and paladins and new spell schools for the mages. But spells costs money and I cannot afford everyone to have the latest spells so I have to return to the sewers several times just to get more money. 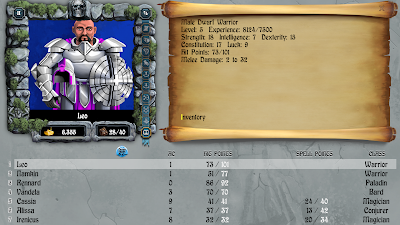 Good items is hard to get by but I have slowly found some mithril armour parts which is more effective than the best armour the town shop can sell. I have yet to find real good magical weapons or items. 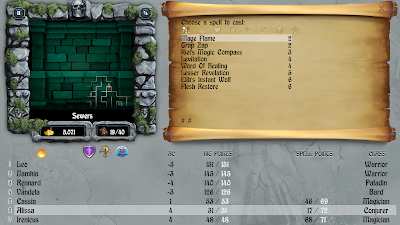 In this first part of the review I want to stress the really good, improved features of this version:

I think this version from a technical standpoint is very successful. I have yet to really come deep into the game because I am still only exploring the sewers at level 8. I almost only play the game sporadically in small portions of time which makes the experience very stuttering but that is only due to my limited playing time.
Upplagd av Saintus kl. 8:55 AM 6 comments: