Avadon 2 - The Corruption - Ploughing through

It was a long time since my last post but I can assure you that I have played Avadon 2 since. According to Steam I have played for at least 35 hours. I have no idea how far I have have come but I would guess somewhere halfway and my party is at level 19.

In the Avadon series you play yourself but on every adventure you are allowed to bring two other followers from a list of all those you have met and befriended. For me, that means I have around five other members to choose from and depending on the task I can take those most suitable. That is for the most part impossible to know in advance but you could get back to the Avadon fortress and repick your party. The good thing is that all gain experience points even those that are not participating so you don´t need to train each and every one like in the old Bars´s Tale. 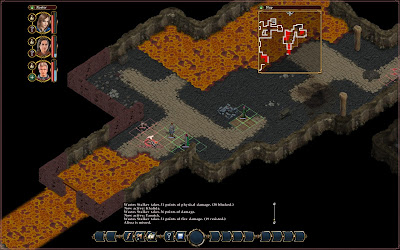 Since last time I have become a Hand of Avadon and have been sent out on various missions that  belong to the mainquest. I have either helped out allies with local problems like cleaning an ogre lair or investigate things or follow the traitor Miranda - a former highranking Hand of Avadon - that collaborates with the rebels in the land. My quests have taken me to the lands of corruption where the evil and chaotic influence is particularly strong and impossible to understand or contain. Avadon have some bases there to keep track of this phenomenon to be able to better understand it but with no success and some of them have already been overrun. I have been part of missions sent there to investigate what is happening and also to give advice of which policy Avadon should take on that. Everywhere you meeet NPC:s that are willing to give you sidequests.

The mainstory is quite good and even though the side quests are very cliché there are some original ones as well. But what really distinguishes Avadon from other similar games is that the dialogues and texts are not boring or tiresome to read. Often the texts are intelligent in the way that they describe what you actually would want to know and questions you would like to have asked. You often have several dialogue options but most of them does not affect much and you can go back to the NPC to repeat them all. For me this is a major thing because I felt that the texts in Pillars of Eternity was just boring to read. Here I don´t tire as easily and the writer manage to keep up the interest. I suppose that is what differs a poor from a good writer. 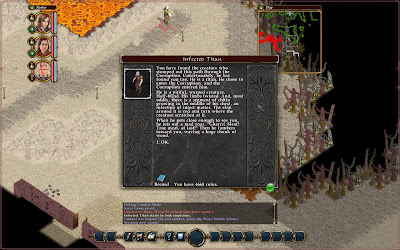 What I also like is that there are atmospheric texts that elaborate on what you see, feel and hear. They are often really well written and add to the immersion of the game.

I have read opinions that Avadon 2 contains too much fights and gets repetitive and I am inclined to agree to some extent. But there is not more fighting here than in any other Bioware title.

Combat is turnbased and you have action points (AP) to spend on movements, attacking, using abilities or items. The number of AP is derived from your dexterity but if you attack you immediately end your round. There is no flanking bonuses as such but your movement is hindered if you pass into enemies zone of control. Enemy A.I is generally quite good and tries to take out your weakest characters first and surround you. I have found that you can use the environment to your advantage by blocking small passageways or fighting at doors so enemy number superiority won´t count as much. 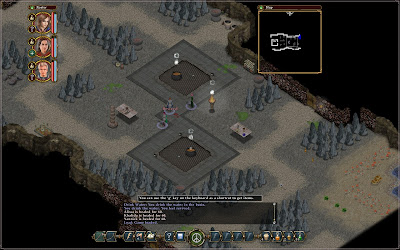 Enemy spellcasters could be really tough and often I try to take them out as soon as possible. Especially if they summon creatures to fight at their side. Enemies also have a lot of different resistances and abilities like fire breathing or raining poisions so there is some diversity involved.

Looting in the game is not as rewarding as I have hoped. You will find chests here and there but they often contain only potions or some valuables. The merchants in the game have limited stocks and powerful weapons is hard to come by. Most of my weapons have been dropped by bosses. This makes exploration less fun than it could be.

At every level you gain one point to put into an attribute and two skill points. Every character class generally have three different branches in their skill tree. The more you put into one skill the more effective it gets. At level 3 and level 6 it adds another bonus. That causes motivation for specialising. The skills further away on the tree is more powerful but you can only put as many points in a tree node as you have put in the immediate previous skill node which forces you to some careful planning. Fortunately you will meet persons later in the game where you can respend your skill points. 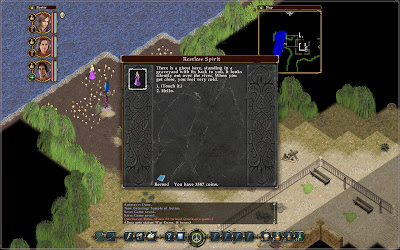 We will see if I have the patience to get through to the end with this game. The fights have generally become harder and harder the further I get. When I first met Miranda in a fight and was held hostage at a demons mercy I thought I had got stuck. I had to change difficulty one step below normal to be able to survive that fight. I had to do that at the ogre boss fight as well. I feel I lack the offensive spells I would like and while my fighters are good there are no better weapons to buy for them despite me having enough gold.