Ravenloft: Strahd´s Possession - To the depths of evil

Last time my group had just cleared the whole cemetary except for the major place there. The entrance down to its catacombs. The reason for that was that the entrance was guarded by a very powerful undead creature and the only way to get in was to give the two statues outside the crypt a gift in the form of special bag of dusts I had found in other places of the cemetary. After having convinced them of my intentions they allowed me to pass through the undead guardian and down to the underground cemetary levels. 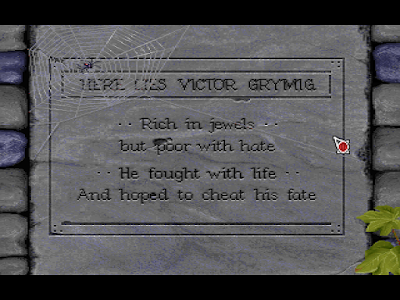 These levels was the toughest so far. Level draining creatures in almost every room. But I found out a tactic for them too. If I did not have room to manouver and cast spells like fireballs, ice storms and magic missiles from afar, I would cast a protection spell to help against being drained. It only affects one character but by casting it on the two front characters the chances are very much improved to survive at least one hit. Regardless of tactics I had to save the game after every singe enemy killed. 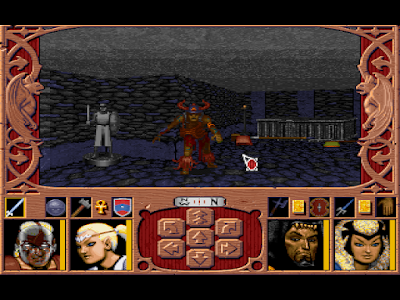 As before my goal was to open doors by finding certain hidden buttons or keys. It took a awhile but eventually I got to the stairs leading down to level 2. While exploring these catacombs I found a lot of different items, mostly healing potions and clerical scrolls but also the occasional magical wand or weapon. Level two required me to open six or seven locked doors in a row and it was only possible by finding hidden buttons around the whole map something which was not that easy because they are difficult to spot and some of them was found in secret rooms. I had to quickglance the cluebook for the last button. In the end I found a staff of revival and an elf´s signet ring. Both items which I concluded was to be used in the church to revive the fallen apprentice the high priest had spoken about. I returned there and to my satisfaction it was correct. I managed to resurrect the person from its bones and could even recruit him, an NPC priest. He was only level 4 I believe and since I was in level 7-8 with the rest of the group that was never an option. He told us about his story and that he had managed to sneak into Strahds castle by using a key. He was willing to give the key to us if we would enter the castle and defeat the evil Strahd, something we where keen to do anyway. 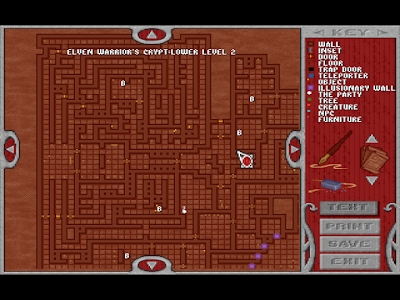 So after having revived him and completed the final chapter of the church and cemetary - or a least that is what I believed - we returned back to the town. It wasn´t until now I realised there was another exit in the town that lead north. We took that route and fought our way forward to Strahds castle. With the key we could enter. 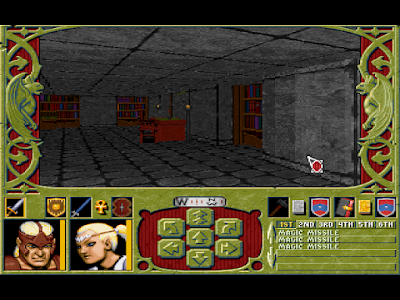 Strahds castle turned out to be a huge challenge. It was interconnected through several stairs to several levels both down and up and also to different towers. It was filled with guards which was tough to destroy but worst of all was the zombie lords. I have yet to defeat one. My tactic is to make the grouip invisible and to sneak past the zombie lords. I have found one key but there are lots of strange places to explore, a huge amount of secret doors so it will take time to complete all these levels at one. I felt quite bored to search through all of these levels and run up and down through the stairs. It was hard to follow since stairs is not marked on the automap so I had to manually make those notes.

I found several pieces of parchments and letters that Strahd had wrote himself and I am now certain of his true evil. He must be stopped.

I am struggling through this place right now and hope I have the energy to complete it and get out on the other side. I have no idea how much of the game remains but suspect I have at least completed over 50% by now.

I will return in another post when I have completed all the castles hidden floors and dungeons and when my goal is clear and linear again.