It was merely weeks ago I learned that Might & Magic X: Legacy had been released. The last game, Might & Magic IX was released in 2002 and it was very poor. I tried to get into it both then and in 2013 for my blog but I just couldn´t find the motivation and dumped it after a few hours. I never got enough material to write about it.

Anyway, I read a little about this new sequel and it had received quite good reviews so it was a must buy for me. My first experience with this brand was with Might & Magic II for the Amiga in 1988 and then with the follow up in 1991. Unfortunately that was the end of the series for the Amiga. platform.

It seems the story is taken from the Heroes of Might and Magic rather than from the previous Might & Magic (note the ampersand difference!) world.  Not that I care really. The story in the game is  uninteresting due to mainly a poor execution and boring texts and dialogues that I couldn't care less. More of that later.

The game starts with you having to pick four adventures from four races: human, elves, dwarves and orcs and then pick a class for them. Every race has three starting classes and then there are advanced classes that could be reached later in the game. There are tooltips that tells you the advantages of every class. In the end you have to distribute a fixed amount of attribute- and skillpoints. Here is my first complaint. The skills are not described in any details in the game or in the manual so I wasn´t sure of what certain skills really did to my character like.

When you have to choose magical schools I had the same problem. With no way of knowing which spells I would get later on if I select Earth, Fire, Air, Water, Dark, Light etc how could I build a group of characters for my playing style or liking ?

At this point I was pretty annoyed. Today all games are shipped with digital manuals but still they couldn´t include a complete list of skills and spells with their descriptions! A major mistake in my opinion. I had to google for some information just to know which schools sucked and which didn´t. I have never cared for replaying any RPG and would not like to spend hundreds of hours to try out the best party. Life is too short for that.

Ok, so with that in mind I eventually ended up with a party consisting of one orc barbarian, an elven bladedancer and two human freemages, each of the mages complementing each other so I had access to all magical schools for humans. Worth mentioning is that each race has its advantages and each class might have skill caps. There are so much information to take in when creating characters that I much later found out that my favourite magic school (fire) was capped at master level for my freemages. 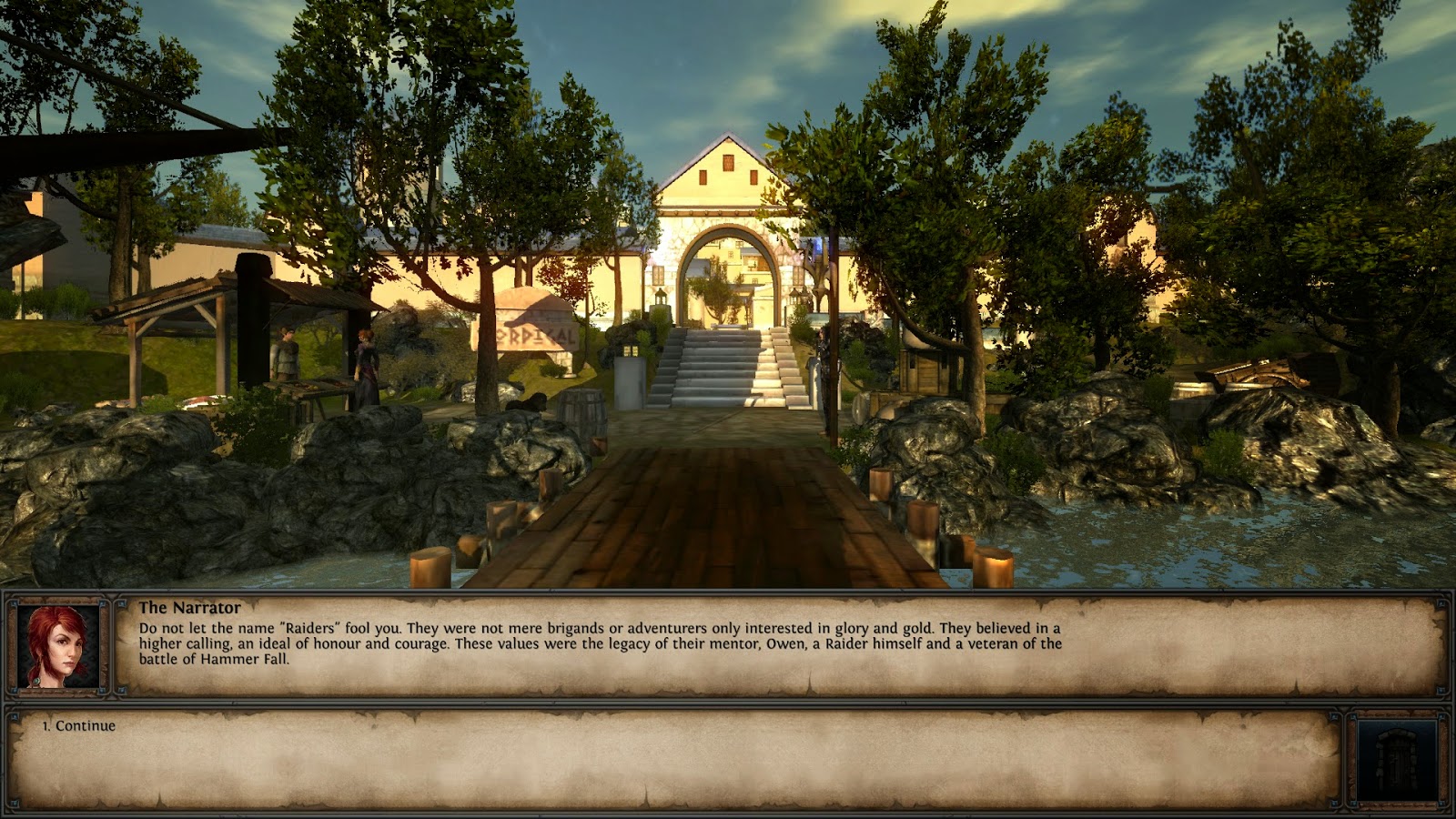 Enough complaining because the game is rather good. You start out just outside the first city in the game. Your main goal is to reach another city but that city is not reachable nor accessible in any way right now. A female speaker voice tells the story of our group of adventurer and the we are on our own. The graphics, despite using a very old graphical engine with few details, are still rather good and a refreshing sight. Or it is I who have got used to the old graphics in all crpgs played for the past years. 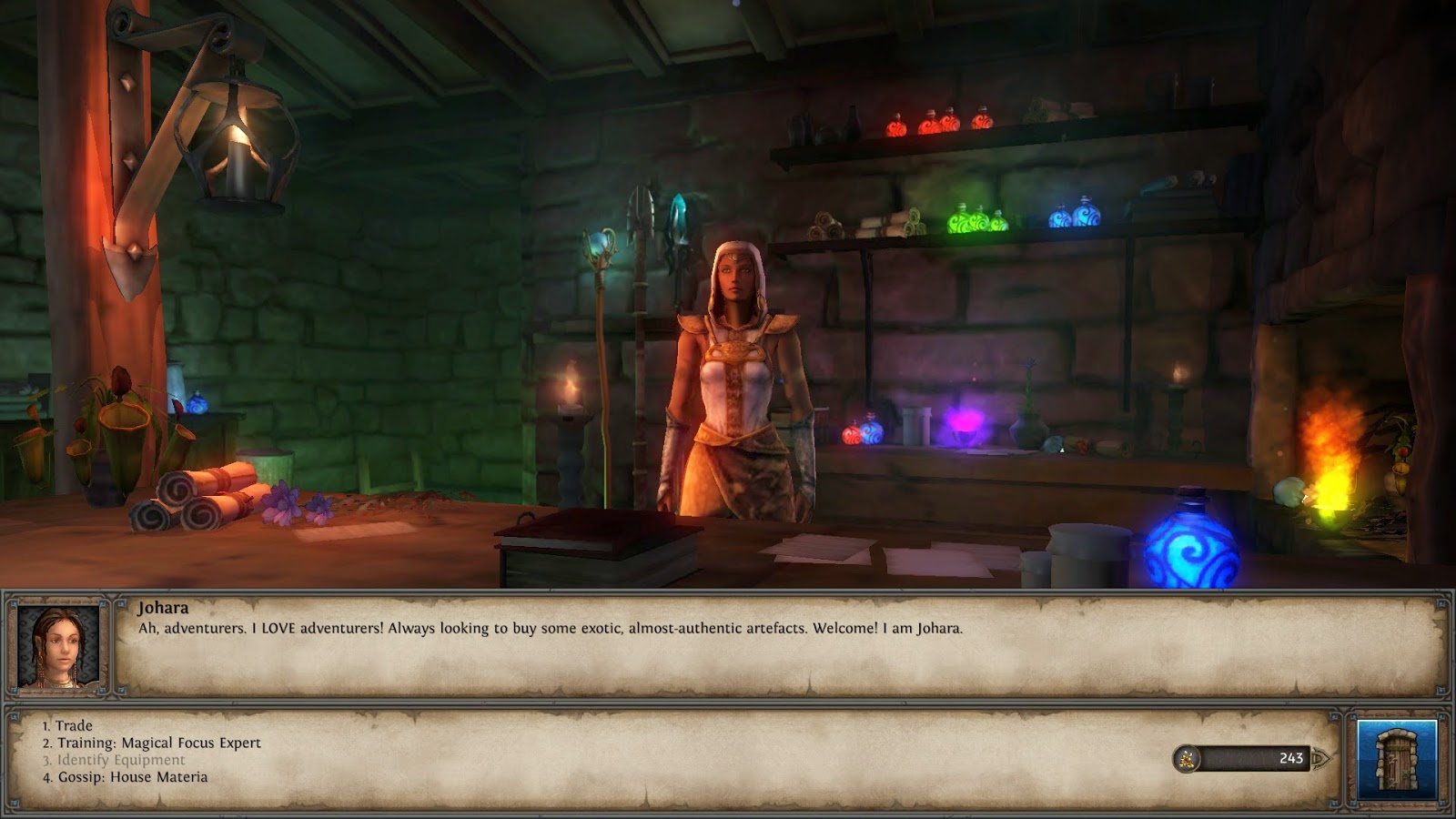 You can explore the town and get to meet a few NPC:s, most are shopkeepers. From them you could gain some quests but the dialogues are non-existing. You never have any dialogue options other than yes or no so it is very simple. That stays for the rest of the game. You get sidequests from NPC:s or you can buy to learn skills from them. In the town you could find classical places like a weapon smith, armourer, magic shop or inn. Here and there you have the opportunity to hire hirelings. They don´t actually take part as beings you could use in fights or equip but add certain skills or abilities to the group. Quite nice. 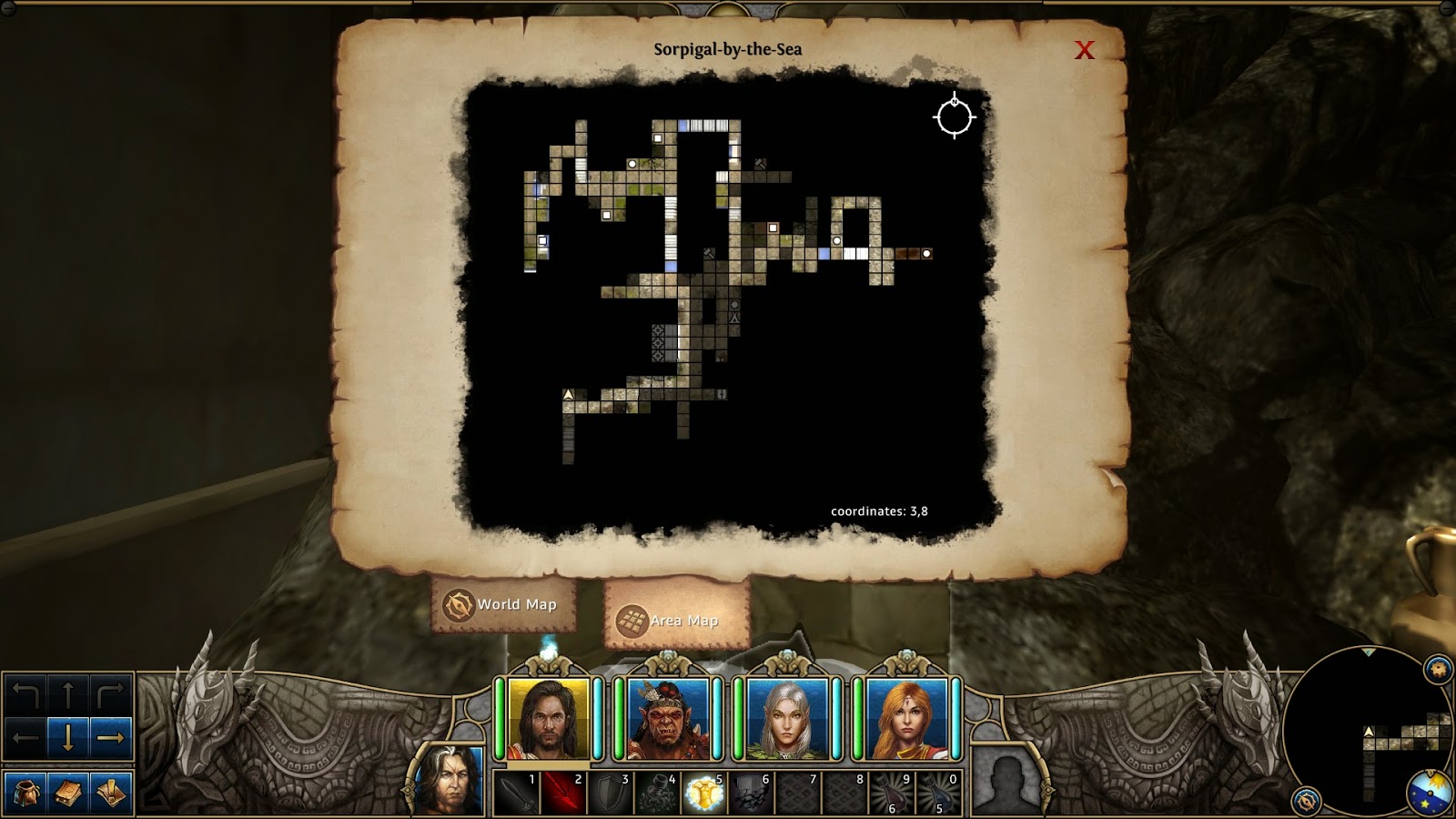 The classical start mission I got from the garrison commander was to clear out the city well. Deep down it was filled with huge spiders. I have to say I really like the graphics and the user interface works well. It is very colourful and the environments feels unique even though your movement is stepwise. The automap works very well and all important locations are automatically added and you can make notes as well. 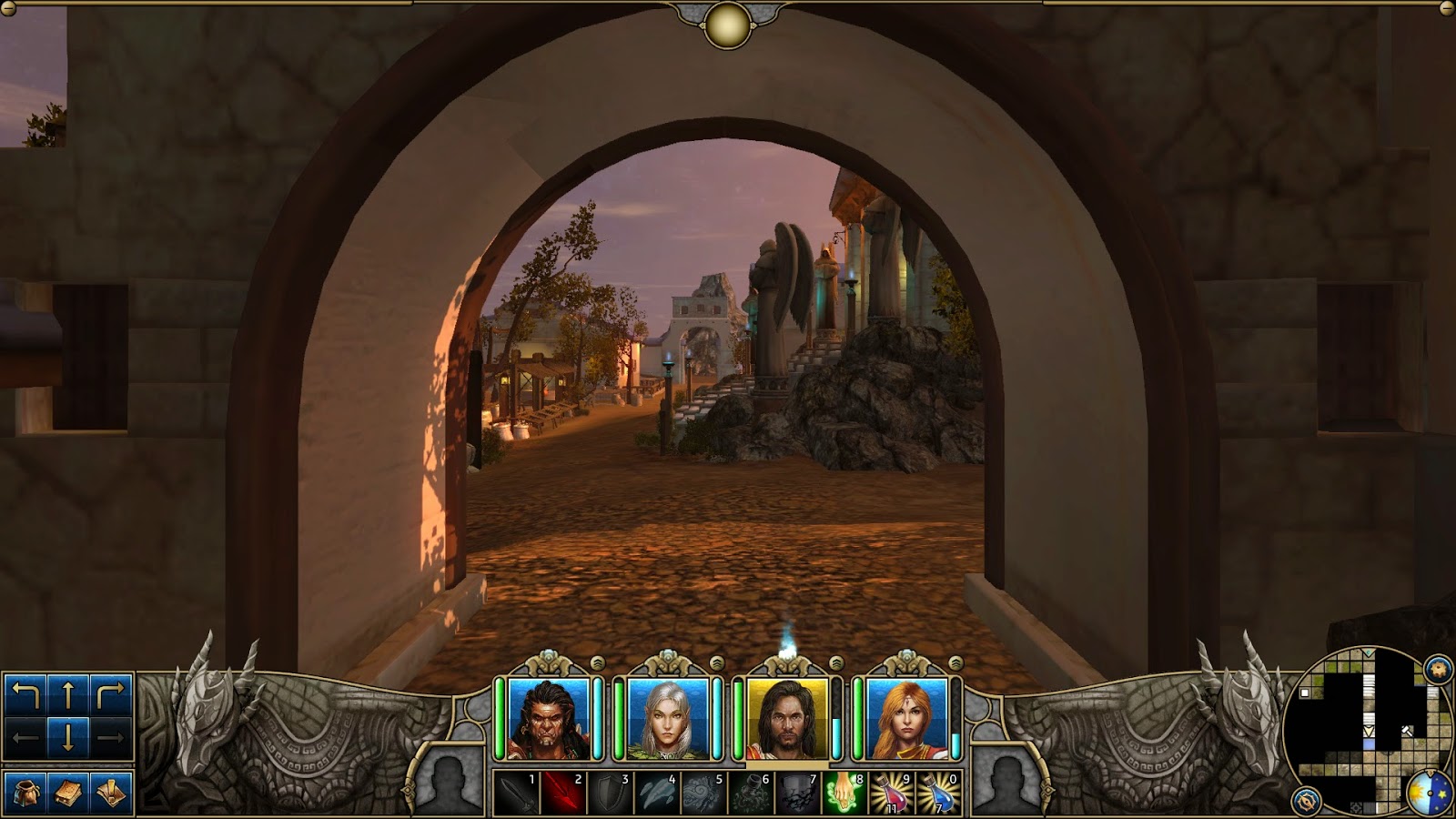 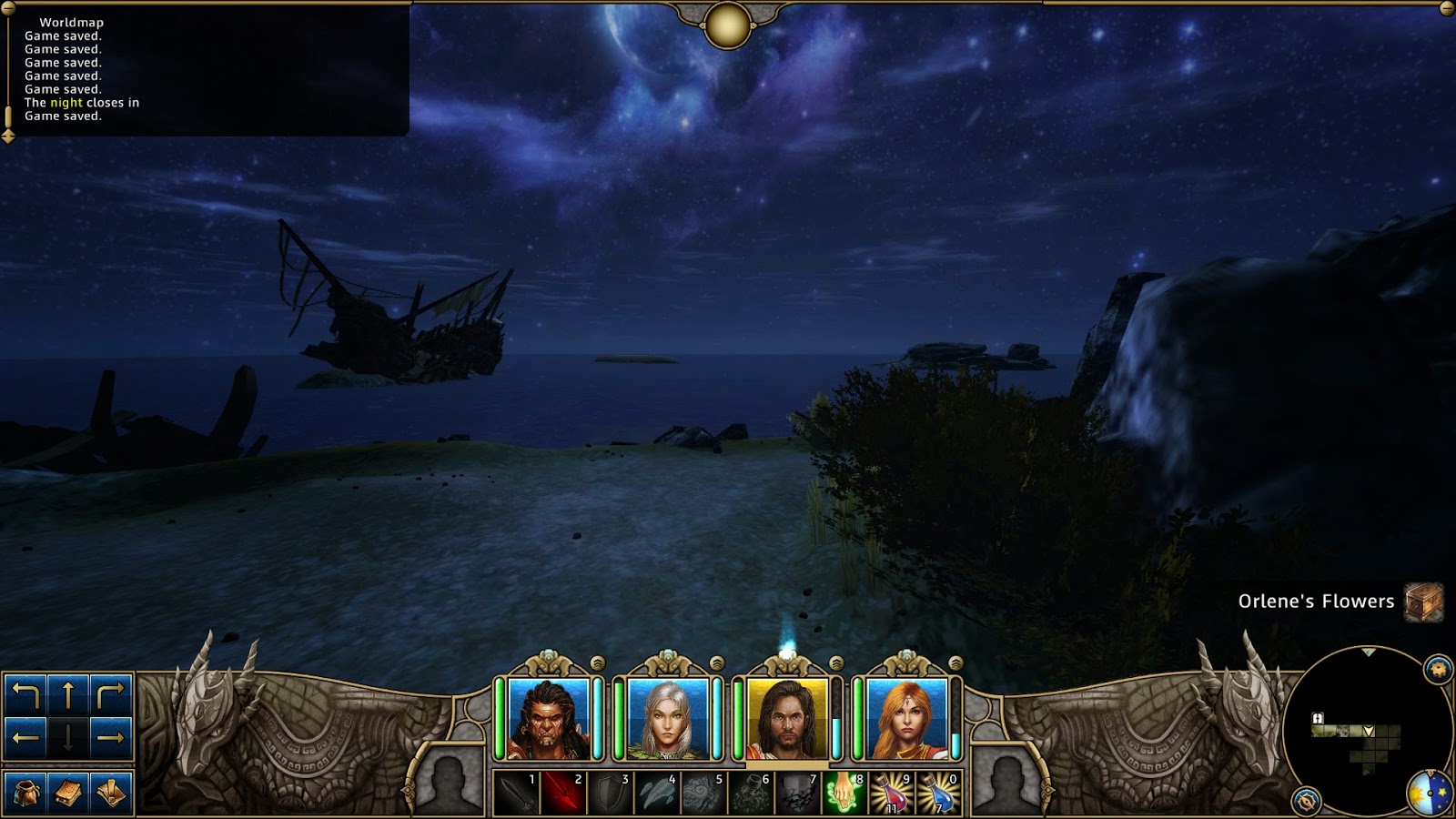 You have day and night cycles in the game but they don´t affect anything other than passing the time. You will not regenerate hitpoints or mana automatically. You need to rest and spend one provision and in the starting town you could only buy 6 provision at most. That means you have to travel back and forth a lot of times when exploring far away from the town. Even though you find healing- and manapotions they are too valuable to waste for any fight and they are expensive to buy.

You start out - naturally - with little or no equipment or spells and have to buy everything you need or find it. Money is always a limiting factor. Fortunately there are quite many chests and barrels spread out. The most valuable ones are found guarded by monsters. And here I feel they have done a very good balancing job. It is really fun to open chests and find items. You never know how valuable it will be or how good it will be. The curiosity is at top. And even though you think you will find quite some gold it is never enough when you have to buy expensive spells and increase your skill levels from novice to expert to master and finally grandmaster. 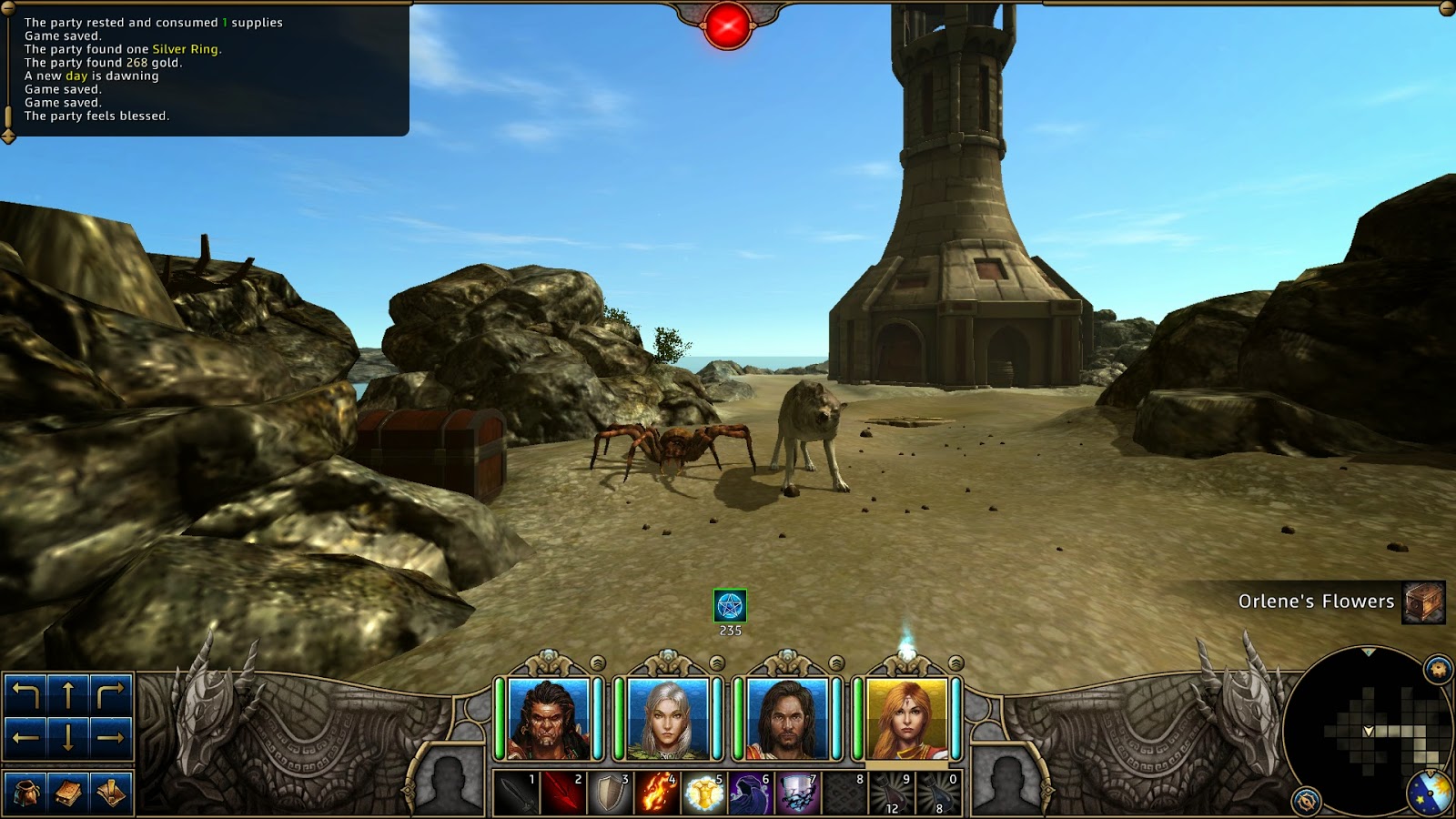 Even the fights are quite fun and you find yourself trying out different spells and tactics to use. They are turnbased, just as your movement. Range is an important factor both for ranged weapons, spells and your abilities in it. It is extremely rewarding to increase in skill levels and actually see the effects it has or increase in levels and decide how to spend the 3 skill spoints or ability points you get. They have really succeeded in keeping this charm which is so important for a good RPG.

Tooltips help you to quickly assess an items abilities and worth and it helps you comparing it with what you have equipped. The inventory is shared amongst your four party members but they individually equips their own items. You do find unidentified items and unless you want to pay much money to get it identified, you will have to find the right spell in the right magic school. 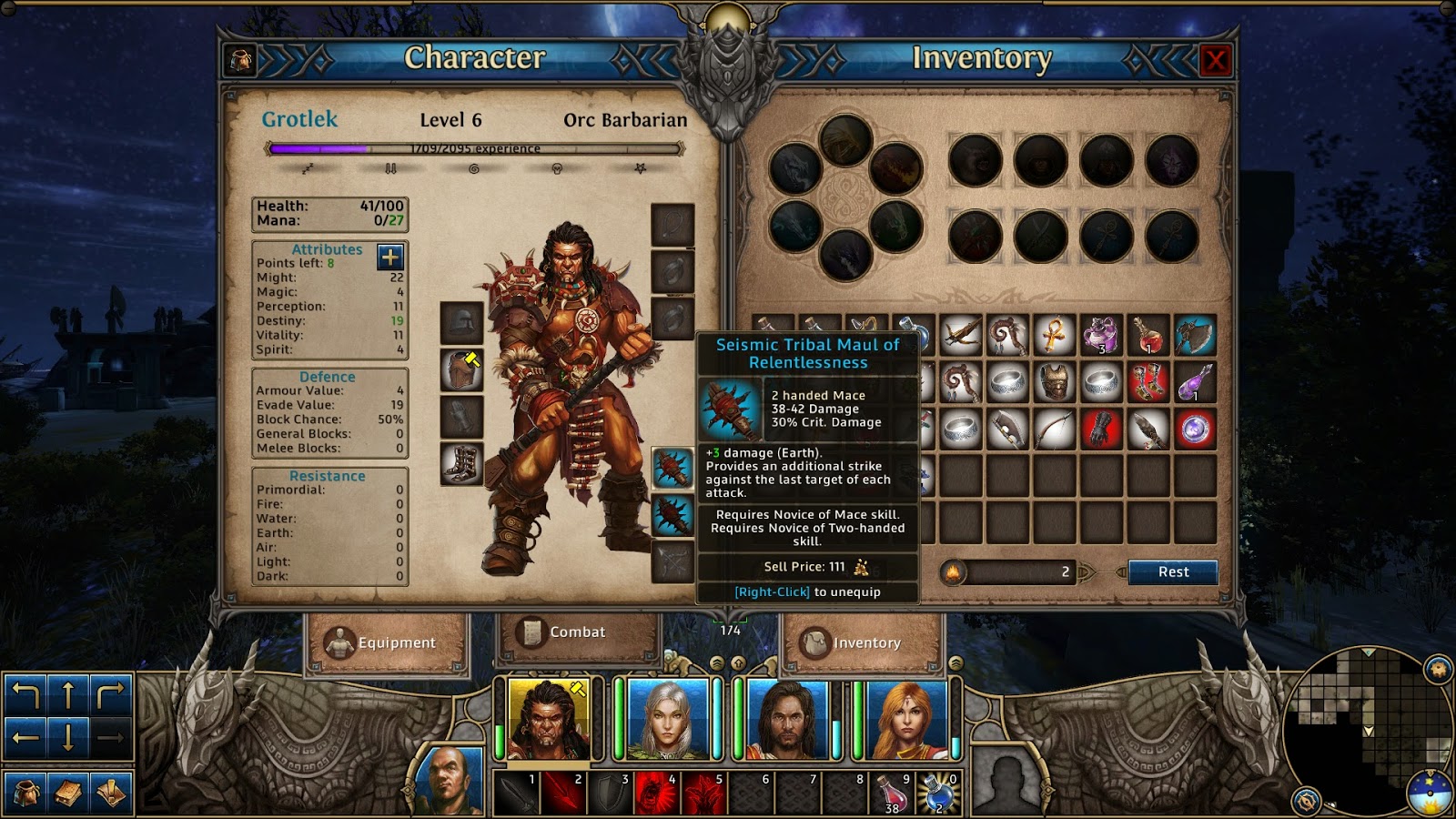 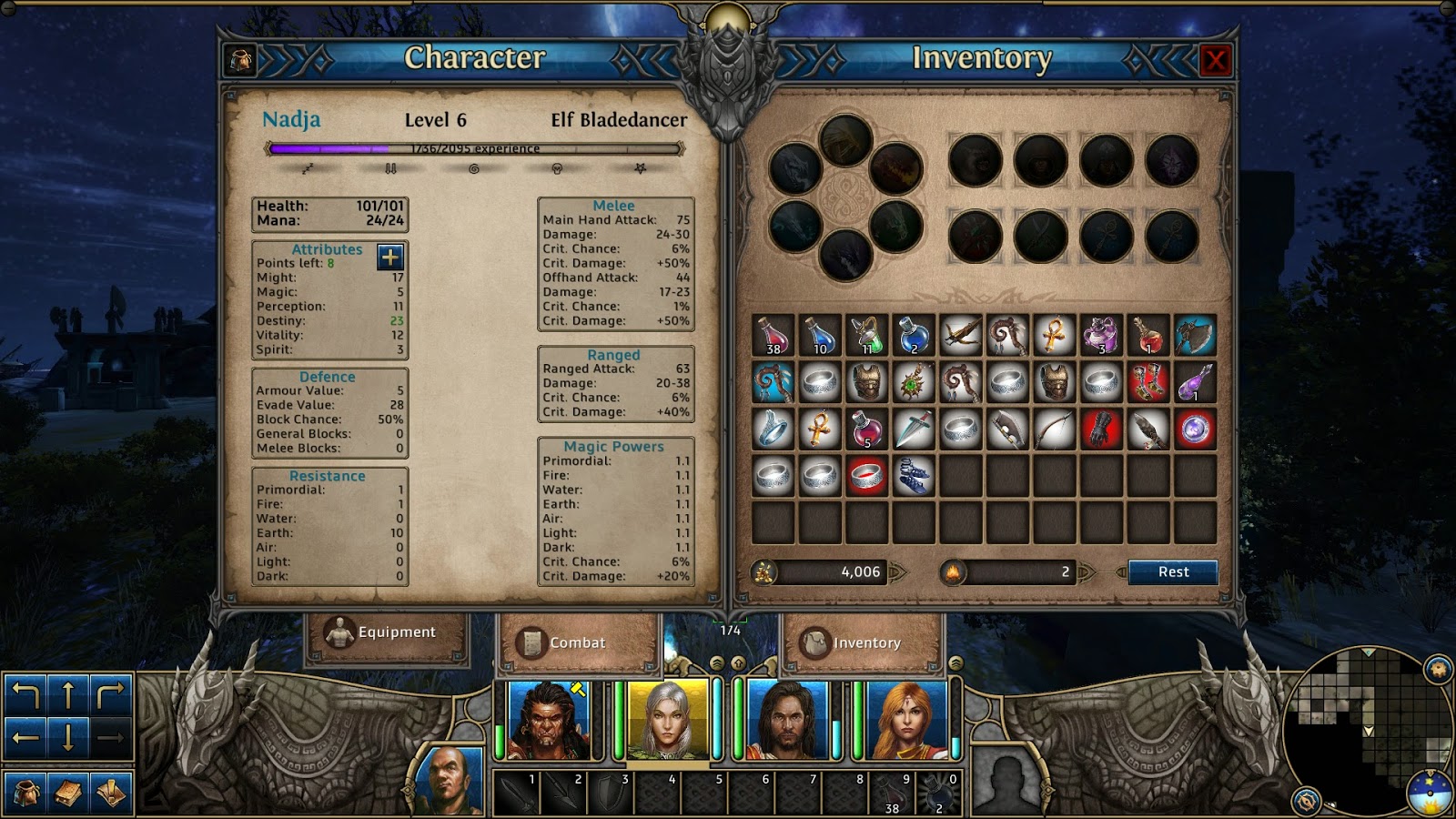 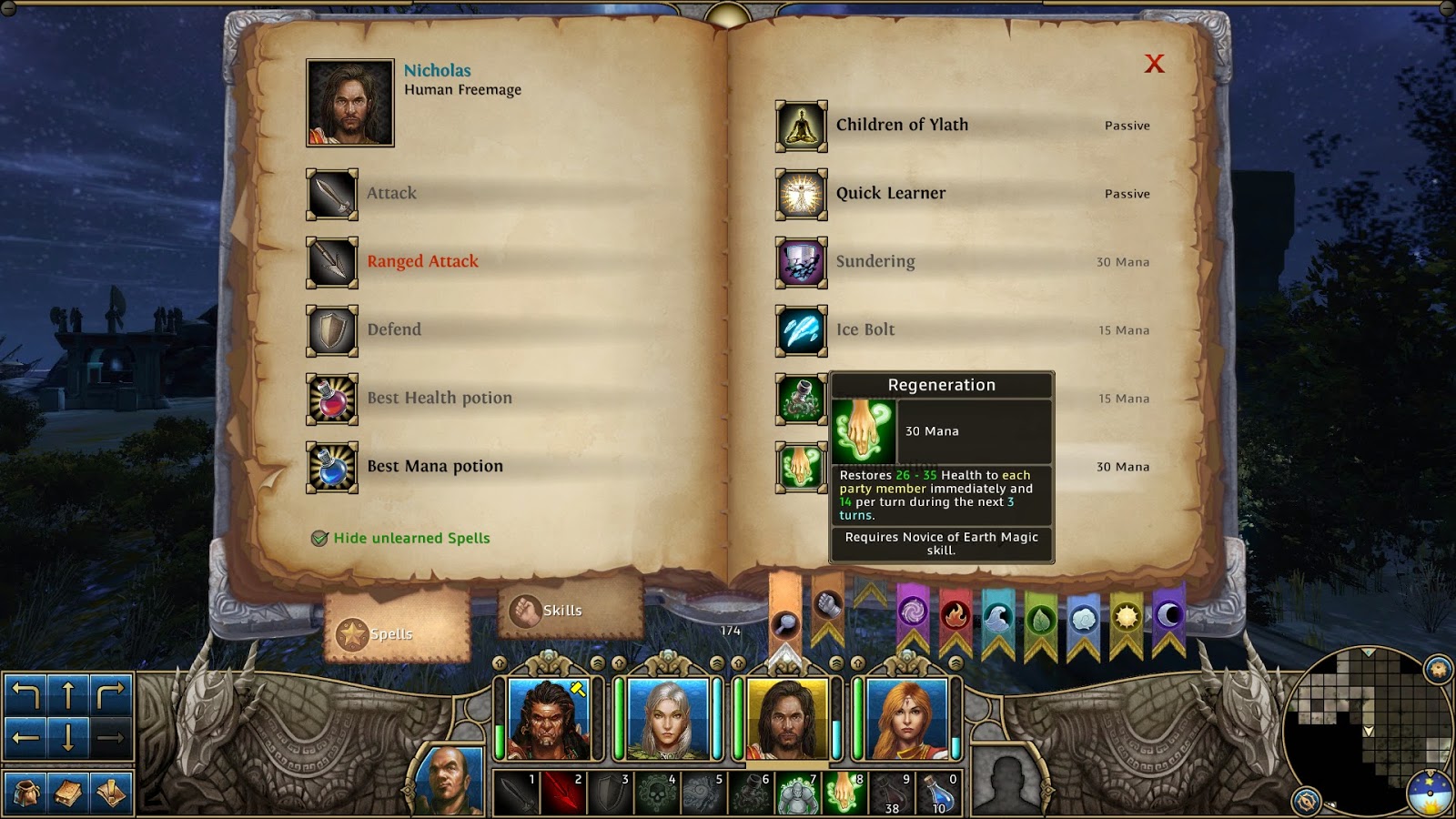 I have to say that I have become totally hooked by Might & Magic X. My group is level 12 right now. In the beginning you could choose difficulty level. I choosed the harder one and it has payed out well. Many said it was hard on the forums but I don´t think so. I think it represents just the perfect balance. I even thought it was too easy for most of the starting hours in the game. Only the boss monsters posed any real threat. Now when I am in act two out of four I admit it has become harder. I suppose that if you don´t specialise and spread out your skill points you will have it quite tough to beat some enemies. Since I am and old school player I always save half of my skill and attribute points until I really need them. Yes, you don´t have to spend them when you level up, they all accumulate and you could use them any time.

It could be read in other places that the gameworld is open and not linear. That is not entirely true. You are contained into locked regions which don´t open up until you´ve completed some quite hard tasks so no, you cannot just run around in the whole game and enter any dungeon or castle but you can at least choose from a few at some time. There are a lot of places which are way too hard to tackle and you have to leave them be until you have become much stronger. That´s just how I wan´t it too be. 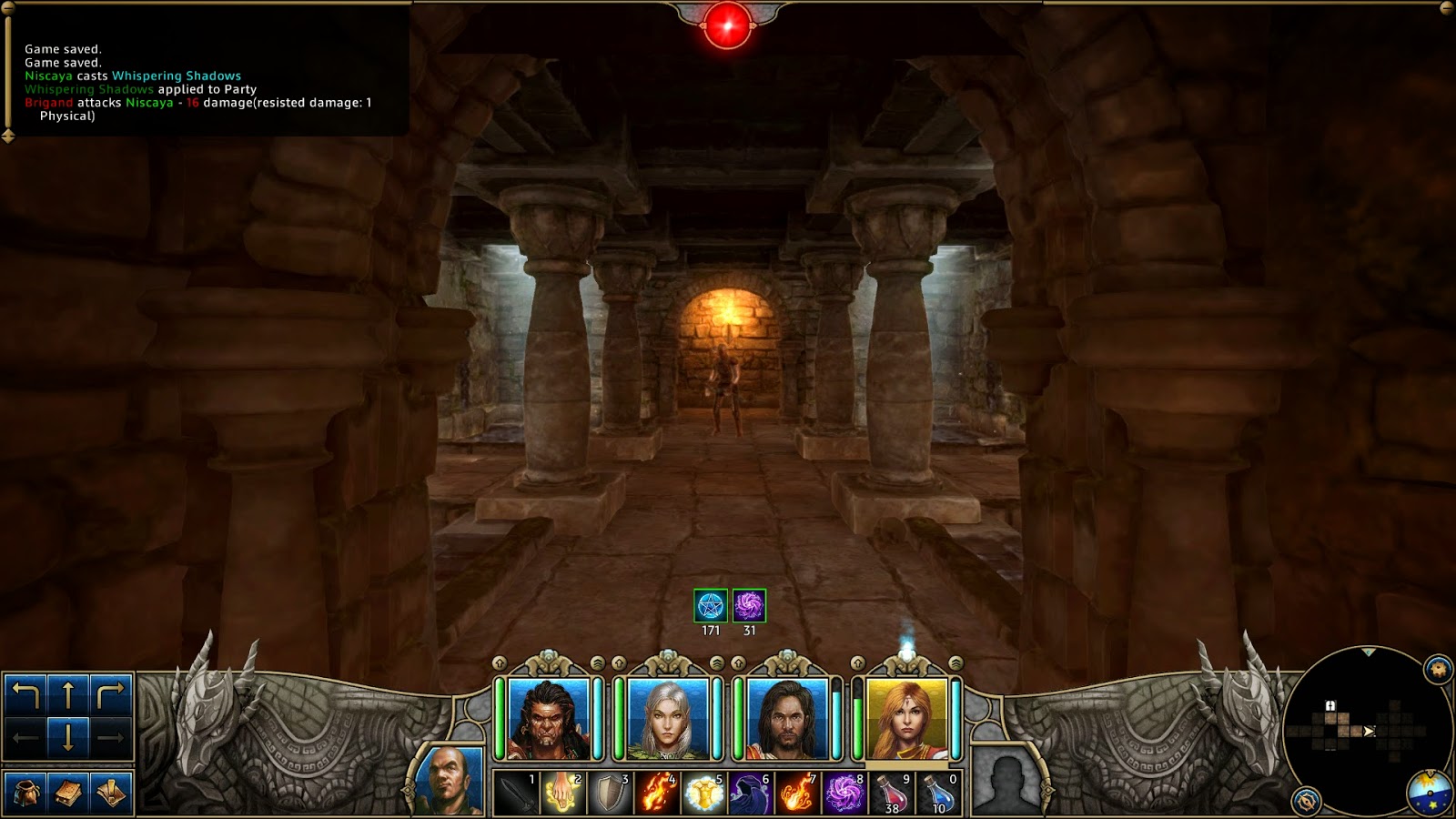 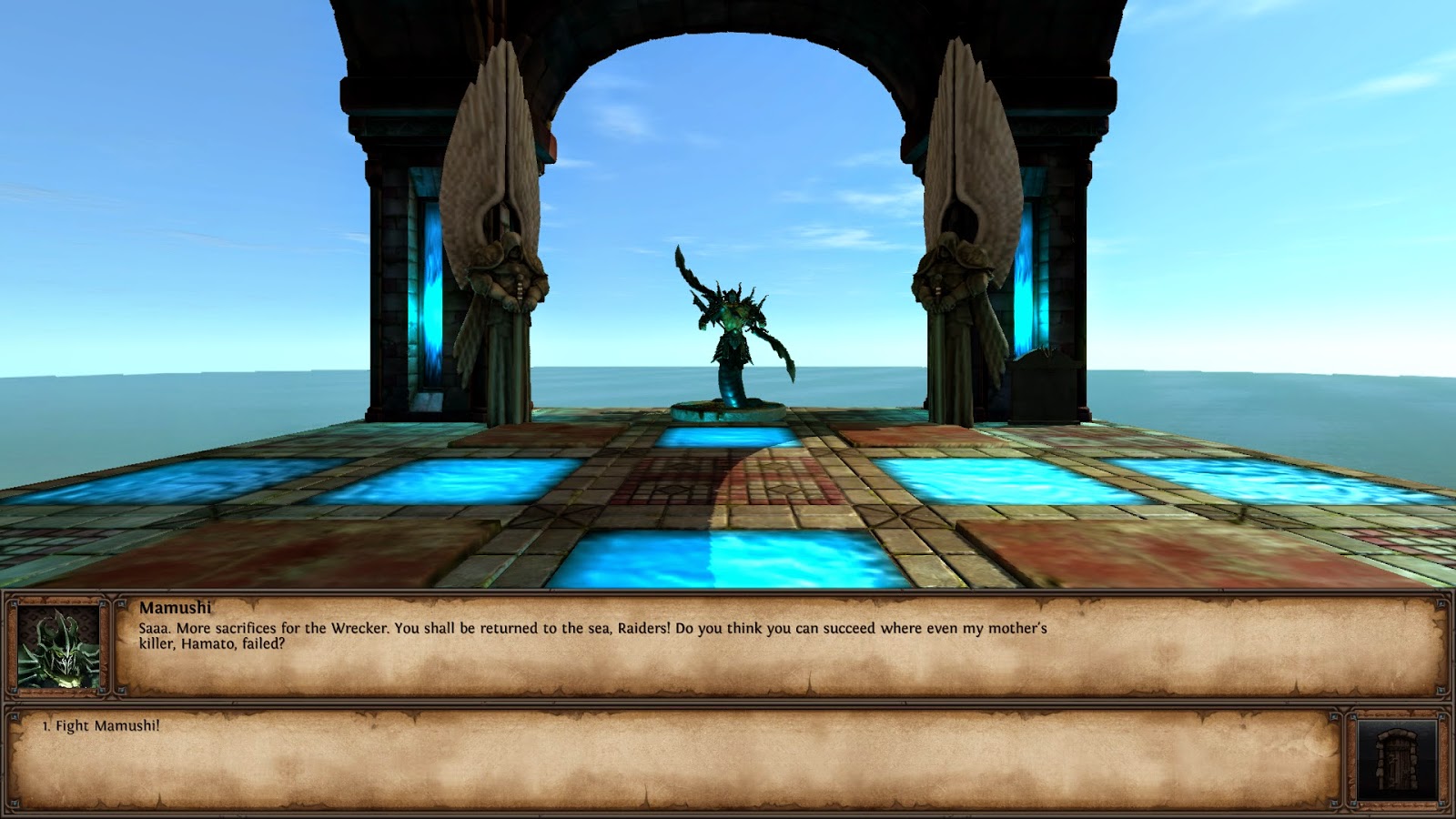 This game is true to its ancestors when it comes to old, hardcore gaming. It is very thin on story and heavy on combat, exploration and party customization just like the former games was. But what I like really much in this game is the almost total lack of random encounters. When you´ve cleared and area it is a free area 95 % of the time. That also means there are no grinding places which could be tough for those who have misused their skill and attributes because you cannot change any character while ingame and have to restart. Hopefully I won´t come to that later on in the game but this is just another reason for including as much information upfront in the manual as possible. At least today when printing costs, shipping costs and environment won´t be a problem. 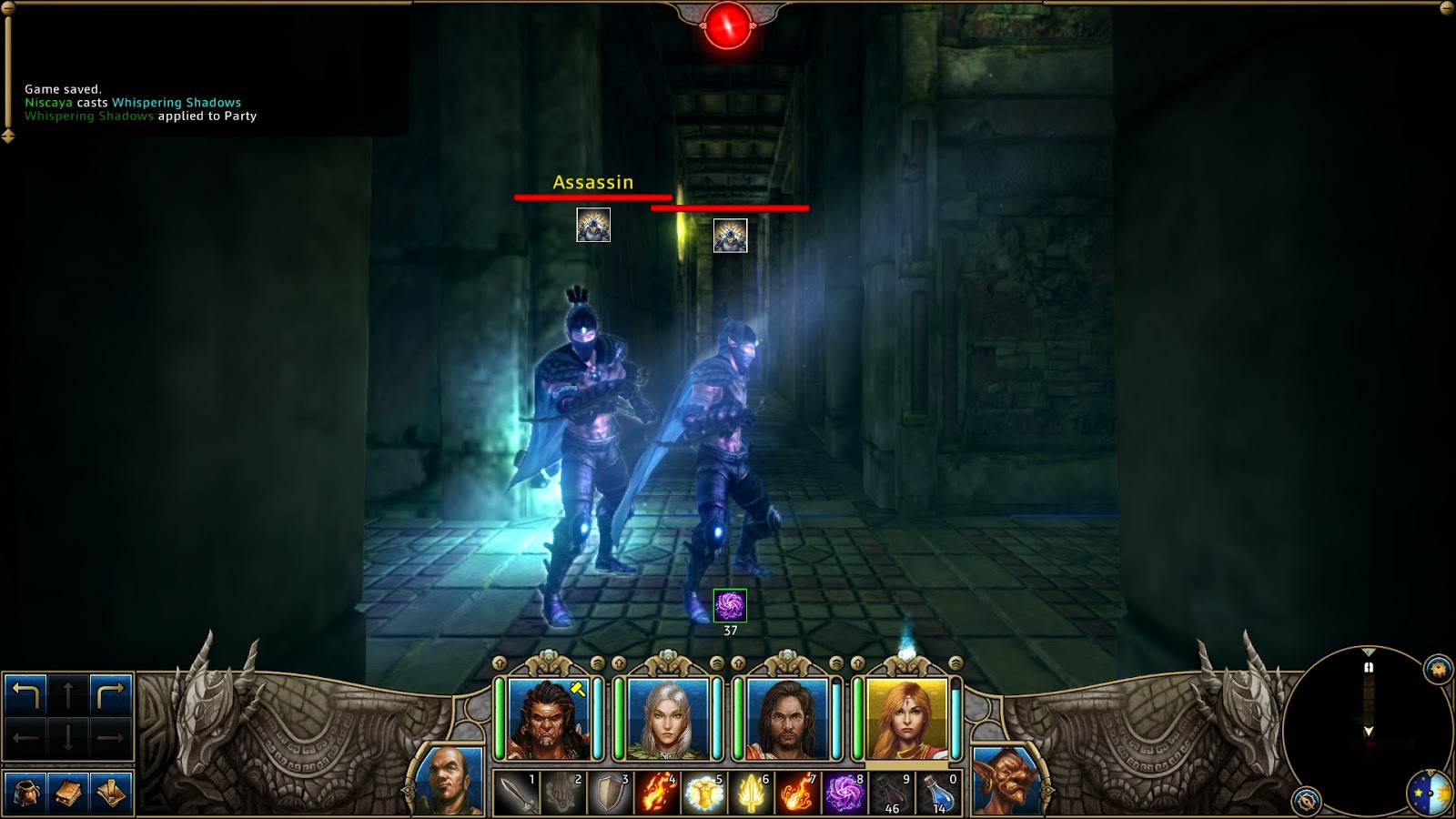 I´ll return with more information about the game in a future post....now I have to get back in the game. If you cannot wait for my review I can state it now that it is well worth it´s money and the developers have come with several patches since its release date so I don´t think there are any majore bugs left. It runs smooth and the music is also very good. So good in fact that it deserves to be heard: Might & Magic X - Theme music