Like a prey, I have kept my eyes on this game for several years. A few times I have tried to snatch it  but everytime I have quickly lost the grip because I never got the sound to work, lacked the manual or whatever. The interests emanates of course from the fact that the original FaeryTale Adventure ranks as one of my best RPG experiences ever and that game alone was the fact that I wanted to buy an Amiga 500. While my revisit to the original faery tale adventure turned out to be a dissappointment today, it nevertheless wasn´t in 1989.

In 1997, when this sequel was released I totally missed it. I suppose it wasn´t very well marketed and I know today that the company behind it, The dreamers guild, went out of business while making this game and had to release it quickly in order to release it at all.

I had never heard of that developer at the time but they do have some games in their record and a few of the more famous ones are  the train simulator A-train, and the mac version of the adventure Legends of Kyrandia. Fortunately David Joiner (alias Talin), the original creator of the Faery tale Adventure, was part of the production of this sequel which I hope will be felt while playing it.


This game is quite hard to get by if you want the CD-version which include the music tracks and voices.  In my revisit I am trying out the CD-version.


The game doesn´t allow for characters to be generated. The three brothers Julian, Philippe and Kevin are back from the first game and once again they together must solve the challenges ahead in this one. They have been teleported to this new realm and have to save this kingdom from the evil that threatens.

You control one of them at a time and the others will follow, or you could split them and send them away to different directions. They have their differences regarding starting skills and characteristics but more of that later.

We start the game just outside an inn in a square with three stoned steads. Since the manual recommends to check out the tavern and innkeeper we went there first. It was a large two storey inn with several rooms and NPC:s. I talked with everyone and it is here I note the difference from similar games. You use icons with mental ideas that represents standard topics to initiate a dialogue with. It could be a simple greeting to to topics such as potions, magic items, weapons, armours or shops. You have to click on the icon and then on the NPC on the screen to ask of the specific topic. I have so far not seen any dialogue choices.

What makes it even worse is that the NPC:s don´t neccessarily give all information at once so you have to repeat the process until they start to repeat themselves. This system is extremely cumbersome and there are no keyboard shortcuts to make it work faster. That is my first impression.

Every NPC speaks with voice if you play the CD-version and that is a nice effect for a game from 1997. The music is a very simple tune much inferior to the amiga version of the first Faery tale.

Inn the Tavern I also found a board of notices where I could read about rumours and tips and hints about local dealers. I decided I should explore the town Paravis before venturing out in the countryside.

Almost every house have either a potion, scroll or other item to take and there is no risk with burglary or stealing, even if it is done just in front of the owner. In this way I quickly built up a supply of potions, scrolls and lore. I soon reached my carrying limit and had to prioritize what to bring with me.

The game, just like its predecessor, features day and night cycles but I am not sure if that have any effect since you could disable that feature in the options menu.

During my exploration in the night in the southern part of the town a man comes running towards me and with his last breath tells me that he and his family has been attacked by goblins east of the town. He collapses on the ground and dies. At least I have some clear indication of where to go now when leaving the town.

There are a few shops in town: a general store, a temple, blacksmith and a peddlar. They all have something to sell or buy. The interface for buying things is quite clumsy. Look at the image below. 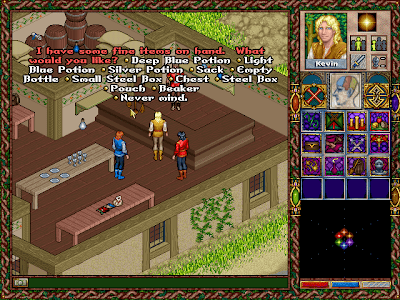 You don´t see the price of the item until you select and ask about it. If you then reject the deal you have to start over by choosing the shop idea and palce it on the NPC to initiate the buying dialogue again.  Also take a look at the icons in the right section below the image of the brain. It is the different ideas that I could select and then choose to apply to an NPC in the main window. The brain is divided into three colors. The other two are skills and spells. Neither of my brothers start with any spells and the skills seems fixed at being swordcraft, shieldcraft, bludgeon, spellcraft, agility, brawn and archery.

According to the manual they could be rised while using them or by finding a teacher.

In the town, there are certain houses that have stairs either leading up or down as seen below. They could contain some rats you could practice slaying. There are no experience points in the game but you will automatically increase in any of your skills by using them. From time to time your vitality (health) will also increase. Probably as a result of fighting. That also means there are no levels. Just like in the first game. The more you fight the better you eventually become.

In town I examined every shop, what items where available and checked the prices to get a general idea of how rich I was with my around 50 gold crowns. It turned out I could hardly afford anything worthwhile.

When I felt I was finished with the city I decided to go north because I spotted a graveyard through the outer walls and saw a zombie there.  I entered the cemetary and was attacked by three zombies. The first time one of the brothers died during the fight so I had to reload (I have no idea if I could resurrect him in the temple). The next time I stopped to eat some food and drank a blue potion before engaging with the third zombie and this time things went better. I was still hurt after the fight though but it seems food or blue potions is what gets you back in health again. I plundered the corpses to find some much needed gold and decided to leave the graveyard and head south. 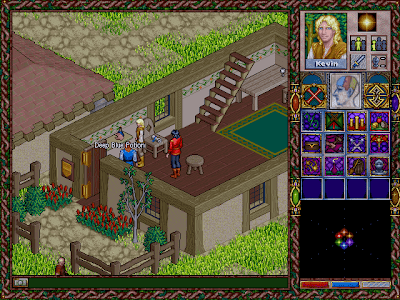 While in town I read in a book in the moontemple about a tower or ruins south of the town in which the legend says a magical venom sword is hidden. I felt quite intent on finding out where it was despite the fact that the legend told of a demon guarding it. 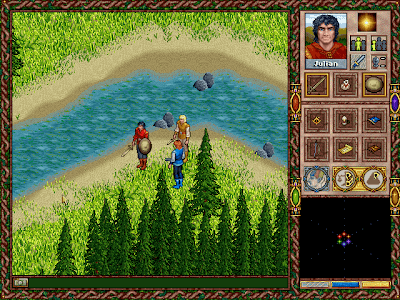 My exploration south of the town took me through densed woods, occasionally split by a river and small roads. In a few places I had to fight goblins but as long as they where 2 or 3 at most I could handle them even though I died a few times.

I will return in a later post about the combat which is very simple albeit a little hard to grasp from an interface perspective. It feels I just try to click on the enemies and the A.I guide my other brothers in doing the same but I am not sure it is effective. Very often the game pauses during combat with a white triangular marking above my leading character. That means its turn based and when the leader lacks any new directions or actions the game pauses. I find this a cumbersome right now and hope I get used to it later on.

Fortunately you have access to an automap in the beginning of the game which gives a pretty nice overview of a large area as could be seen below. The only problem with it is that I can not make any notes which I think will be invaluable later on when I have to remember where I have found special places or people (note: It seems the game itself places small infonotes about important places).


Right now my goal is to search south and east of the town. In the east the poor man that died before my feet told me that he and his family was attacked by goblins and in the south because I want to find the ruins where the magical sword is hidden.

I think I´ve fought goblins in at least five occasions now and I have noticed that occassionally my vitality increases as well as my skills in brawl and/or swordcraft. So I am gradually getting stronger. I returned to the town to buy all three of us bronze breastplates and that did much to improve our defenses. 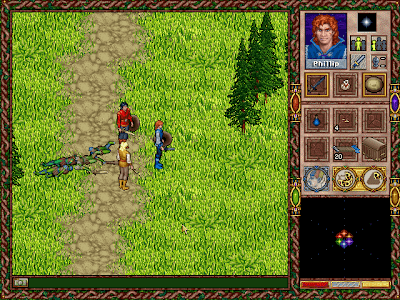 I have a good feeling about the game. I really want to like it because of my fond memories from Faery Tale Adventure. But I must say that the there are several things that are really obstructive.


The responsiveness of the the original Faery Tale that was released for the Amiga 10 years before was much more smoother. Despite these things, there still is the huge gaming world outside of the starting town and you could walk anywhere you like. The exploration lust is there, the great feeling of aquiring more gold and better items also. The right kind of ingredients are in place. So I will keep playing this and see where it leads.