I have only fond memories of Stonekeep released by Interplay in 1995. Interplay was already known as a solid RPG company with games like Bard´s Tale, Wasteland and Dragon Wars just to name a few titles of its past. 1995 was the year in which I finally abandoned my Amiga 1200 and bought my first PC, a 486 AMD DX4/100. It was with sorrow I left the Amiga but I had no choice if I wanted to play the best games. 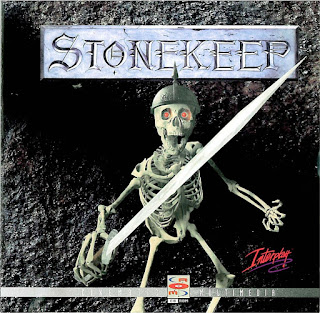 I had the fortunate opportunity to help out a local gamestore with various tasks and I had therefore access to all new games. When Stonekeep arrived on the shelf I just had to try it. I loved the game from the beginning, not least because of its fantastic cinematic intro with fullmotion video actors. At that time it was something that exploited the CDROM on the PC.

When I saw that GOG had this game on sale for less than 2 dollars I couldn´t resist to buy it once again.

You are Drake and as a child you witnessed your hometown Stonekeep being overrrun by the evil Khul-Khuum, the shadowking. Several years later when you grow up you are contacted by the goddess Thera that sends you back to Stonekeep in order to destroy this evil.

You begin with no weapons or armours and with no automapping tools somewhere within the first level of Stonekeep. Only huge corridors, locked doors and occasional windows can be seen. But the place is filled with rats and other denizens.  By picking up loose stones you can use them as improvised weapons against the rats from a distance before they chew you up. Soon you find your first key in the debris and can start to unlock the first closed door that reveals perhaps a leather armour or a dagger. It doesn´t take long until you stumble upon the frist goblin - or Shaga as they are called in this game.

I did complete this game 20 years ago but I don´t remember anything. In a few minutes I was hooked by the game. The voice samples are excellent for its time and in CD-quality. The atmoshere is great. The only drawback, even in 1995 was that it was in low resolution VGA graphics. The game could have been so much better if it had used the standard 640*480 SVGA graphics mode but no. That means that the game is quite pixelated but it is still very good and you soon forget about it when you are drawn into it. 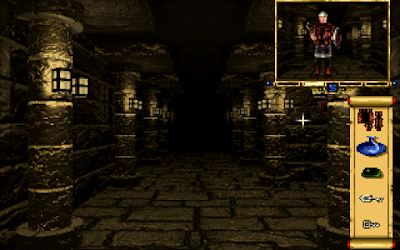 After exploring the first level I found a few valuable items, like my first weapon, a dagger and some throwing stones. I also found some leather armour. Gradually I became stronger and was able to find a sword by defeating a small goblin. Some of your adversaries drop useful items when killed like healing roots. That is essential until you find a healing fountain on the second level. I had to return there several times between the harder fights in the first levels because they get really tough after a while. Even though the game is played in realtime, the frames are very chunky and the feeling was much smoother in other games like Black Crypt or Dungeon Master.

When in a fight there isn´t much you can do other than keep clicking with your target cursor on your opponent. There is only one type of attack, even though every weapon do different kind of damage between piercing, cutting and crushing. What I read somewhere though is that it matters where on the enemy you hit so you have to guess their weakest spot which is not that easy and most of the times I just go for the head. Some monsters like slimes or snakes are hard to hit and you have to wait for them to reach out for you in order to hit them. Unfortunately there is no way you can see how much hitpoints a foe.


You have a few attributes and skills in the games as the screenshots shows. The good thing is that they are improved by using them. There is no experience points or levels but the game keep track how much you have used a certain skill or attribute until it decides to increase it on your character sheet. Both accuracy and damage delivered will be increased depending on which skill you increase.

On this playthrough I used this system to the fullest. I found a magical staff on the second level with two runes. One for fireballs and one for healing. By standing on the recharging mana circle I hurled fireballs into the walls for a few minutes - recharged and repeated - and got my skills increased four levels in magic. The game is quite challenging so I don´t think this will overpower me in any way and I haven´t found a similar way to increase my melee skills. I have constantly been forced to retreat back to a healing fountain after each and every major fight in order to overcome them. 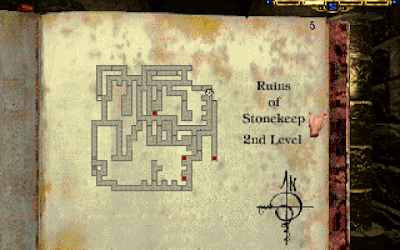 The game is easy to get into, easy to continue playing and you get this feeling of accomplishment when you can equip your character with better equipment or increase in you skills. I will continue playing this game until I tire of it. I don´t feel the need to complete it once again but I sure would like to. I have no memories whatsoever of anything useful I can draw from my first playthrough 20 years ago. 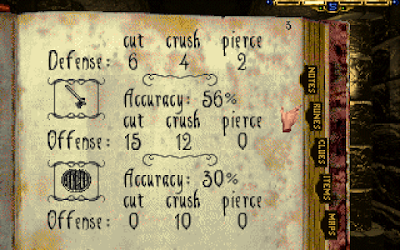 If you haven´t played this game before but like the charm of the old school RPG:s this game is a must in my opinion. Even without a discount. It is a solid game that fills the void after Dungeon Master II which happened to be released earlier the same year by the way. 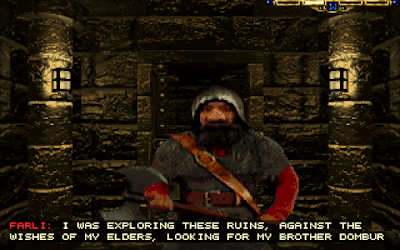 Farli is the first companion I have met in the game. He was imprisoned and wants revenge so we have a common goal. He attacks on his own and I can change his armour and weapon but I cannot see his character sheet. He is controlled by the computer so he attacks at will.

The interface of the game is quite clumsy. Your inventory is a scrollable scroll which lists the graphical items but without any tooltip on what they actually are. Considering the low resolution in the game it could be hard to see what you pick up. The only solution is to look into your journal because every item found is listed there by a text. Also, you could collect arrows, throwing axes and darts to use as ranged weapons and find containers for the darts but I have yet to understand how to draw a single item from a container. Small things with workarounds but anyway.