Before I begin, let me tell you of my gameplay style. I do not like to cheat or use walkthroughs unless I am really stuck or if it is no fun anymore. After all, we all have a life and career beside this hobby and we can only put so much time into it. I think I am quite a normal player in that regard. I save regularly and often. Everytime I am stuck and need help I feel I have failed and that drains the enjoyment of a game. I use the games built in rules to maximize my survival chance. For example, if it allows me to re-roll my statistics I do that until I am satisfied. I am sure I will have enough of a challenge in any time. Just wanted to state that. I do not follow the strict rules of CRPG Addict in this case. All the credit to him though for his excellent blog.
I have read half the manual for the game and have to say it is really well written. SSI was always great at writing manuals. It is full of tips and hints and really tries to build up the atmosphere for the game. Ten classes, 30 skills and at least as many spells divided into several schools makes for varied gameplay. How it works in practice remains to be seen though.
It took me one hour to roll-up my group of five adventurers for Demon's Winter. I both love and hate the ability to re-roll statistics for the characters. Love it because patience is rewarding and hate it because my expectations are so high that I very seldom live up to them and gets frustrated about not being able to complete my character. My group consisted of:
Karon, human ranger
Merrilon, elf wizard
Gnarl, troll barbarian
Legio, dwarf monk
Denvall, human paladin


It was very hard do decide which classes should go inte the group. There are 10 classes to choose from. The more unique being scholar and visionary. The visionary class has easy access to skills such as view land, view mind, view room and view item. It enables the visionary to see a larger view of the surrounding area and also to read merchants mind to decide if they are lying or exaggerating the wares capabilities. That must be the first time a game let the merchants really try to cheat you of certain items. I have never come across it anywhere before.
Paladin and Wizards are always mandatory when I create groups. The monk was choosen because I´ve read somewhere that the skills they utilise (karate and kung-fu) are very efficient and well implemented in the game. And besides, I don´t think I´ve ever had a monk in my team before. The barbarian was throwned in because of the skill berserking which increases the probability of a doing a critical hit to 25 % instead of 10 %. That will come in handy I hope.
The Ranger have the skill hunt which means you don´t have to pay as much for food. Yes, you need food when travelling around in the wilderness and in the dungeons. With this skill you can get it without having to visit a town (not all towns sells provisions by the way).
I have to say that I am quite impressed of the 30 or so skills this game has. They are quite broad and not very similar one to another. It seems every class could be teached every skill in the game but certain classes pay less intellect points for doing so. For example, it is much cheaper and easier for a Ranger to learn the axe skill than it is for the Wizard.
What do we know about the background and story ? Not much actually. You know that blood-thirsty kobolds have been sweeping across the landscape plundering and burning the defenseless villages. The goblins led them with cries of "Praised be our master Xeres". Well, that´s about it really. We have at least one clear enemy.
With the group ready to go I started my adventure into the unknown....
I started out in the Wilderness somewhere. I have no clue where I am or what I am to do. So I go along with the group and managed to survive the first few battles. But I got bold and ventured to far away from known civilization and was suddenly overpowered by a lot of thugs. As you can se below, my Wizard boldly tries to fend them off while the rest of the group is slained. The reason the Wizard is so long-lived is that I used the spell Armour and the enemies have it hard to pierce it for my death to come...
The outcome could only be one....


I realise I have to be more careful and so I try to spend most of my gold on equipment like daggers and small axes. A few selected members even got cloth to protect them with in combat. I then run around trying to build up more gold to buy enough provisions. While at the Pub in one of the cities I learn a few rumours from other adventurers...
This the first information I can find. Jesric, an evil priest, has embarked on a quest for some powerful crystal and works for someone named Eregore. It doesn´t help me much but in another city I meet an old woman complaining about her home having been burnt down by the marauding Kobolds to the south. I immediately prepare myself to investigate the matter.... 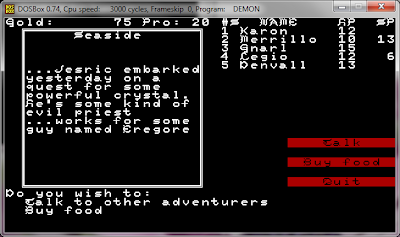 The Kobold camp is very near the city and I managed to sneak in and looks around. There are a lot of tents inside the camp and I have to investigate each and everyone. The kobolds are often acting in groups of four. Very managable by my group and eventually I wipe them out. In the last battle though, I meet 2 kobolds, 2 orcs and the Kobolds leader which I eventually kill. There is no loot or other interesting stuff in the camp. I managed to free a imprisoned woman who was harassed by the kobolds.
It seems the Kobolds are just puppets of yet another power that control things from afar. Who that is, is yet not known to me but it seems they worship someone (or something) called Xerxes.
After having cleared out the camp I return to investigate the world around me and stumbles upon a College of View land. That means they can teach you the skill if you have enough intellect points and can pay for it. The price asked for is ridiculous for the time being so I have to decline the offer and search elsewhere....
So what are my first impressions after a couple of hours play ? Well, I like it so far. I am struggling to get gold and experience points to be able to advance in levels so I dare to enter some of the dungeons I´ve found so far. The gold are needed for the greedy merchants. There are a lot of different items to buy, or rather different enhanchements of the items. A dagger could be a dagger, a well-made dagger, a dagger +1 or inscribed with powerful spells or charges. And there are even more variations.
I fear the combats will get tedious over time but they offer some tactics which I´ve not seen in other games from this time. For example, you speed skill determines how many moves you have during your turn. You could spend those moves by moving, attacking or dodge. Every attack costs 3 pts. For every move point you left unspent you get -1 to hit from opponents if you choose to dodge which also ends your turn. That kind of tactical considerations is a move into the right direction. What I don´t like though is that you cannot see how wounded your opponent are and when there are several opponents of the same kind in the battle it could get confusing.
I will continue my exploration and return here to report my progress and my observations. I am just now waiting to reach to level 2 with my group. I don´t really know what will happen then but hope I will get more hit points at least.