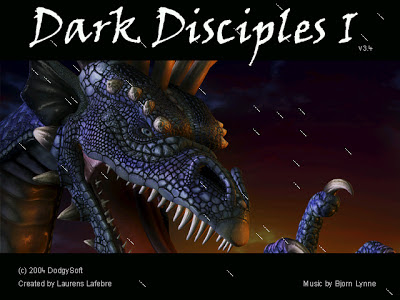 
This game was really a hidden gem. I have played it every day since I first started at first opportunity. My interest in the game held all the way to the end. Very few games keep my interests all the way through, often becoming a chore to complete.

The gameworld are pretty big with at least 5 major regions, each containing several maps and lots of underground places. The maps are all regular but subterranean levels could be very irregular, although never larger than the standard mapsize. The world is filled a wide a variety of climate regions like forests, swamps, lakes, rivers, snow landscapes, mountains, deserts etc. The gameworld are well populated with interesting places and npcs. You never feel you are travelling vast empty spaces.

I like the mainstory. It is simple, yet quite original. You have a debt to pay for your dead father, otherwise you and your mother will be executed. First you have to build up strength to be able to reach the capital. There you first have gain experience enough to be able to undertake the missions Saradin will send you to. For each mission, your debt will be reduced. There is no other way to complete the game other than complete the missions.

Economy
Economy is very well balanced in the game. At least until the last module. It was there I begun to feel I was slowly becoming rich. But on the other hand I have really tried not to buy a lot of potions which would have drained my economy.

Merchants will gradually improve their stocks depending on where you are in the game. But each and everyone will always have the same amount of stock. Except for the beginning, all good weapons, armours and rings are found in the game rather than bought. It is a little pity you don´t have really expensive items you could long for at the shops.

You mostly increase your money by finding gold but you could also sell off items for 1/10th of its value. That takes valuable inventory space though and for me only a small part of my fortune came from selling items. All the way through I felt I just had enough money to survive but never enough to feel indifferent of it.

There are quite many items in the game. There are easily at least 30 weapons, a few dozen armours and several levels of helms, gauntlets and boots. Add to that a lot of different rings and magical wands.

NPC & Interactions
All NPCs are stationary. They never walk around like monsters do for example. You initiate dialogue by going into them. You mostly have several dialogue options and the scripts are well written and mostly logial and realistic. What and how you say something could either be solved by reinitiating dialouge or does not have any longrun effect.

Monster, tactics & combat system
There are quite a number of different monsters and foes in this game. Each region has its own fauna. Most monsters take up one square just as yourself but there are some that are 2 or 4 squares as well. You could use that to your advantage by fleeing through small corridors or using the furniture to navigate away from them. When they spot you (as soon as you spot them) they will move towards you in the shortest possible way. It is possible to run from them even  if they are only one square from you if you navigate around some objects.

Monsters don´t have any morale and so fights to the death. Ranged attacks are not supported in the game unless you count using magic and wands. Monsters do have special attacks that could cause fire, acid, cold or electical damage though, as well as poisioning and disease. If you get hurt enough you could also sustain an injury which makes you even more vulnerable and powerless.

The combat system is extremely simple. Your attributes and weapons totally decides your chances to hit and what damage are inflicted. During fights you could always use items like potions from your pack without loosing your turn. That is very important to make use of since you can only rest and heal yourself back in a town or safe have - oftan far away from where you are. Fortunately moving in this game is very quickly and lessens the frustration to get back to heal and then return. Monsters still have their earlier injuries when you return and that is one way of slowly taking down harder enemies. The other way is to buy enough for healing potions but they will be quite expensive for at least the first half of the game when you seldom have more than 2.000 gold to spend.

There are no random encounters at all in the game. Once you´ve cleared an area it is cleared. That is mostly a good  thing but it also means you don´t have any place in which you can grind and get more experience. And when talking about experience points. Weak monsters don´t give you any experience at all if your combat rating is way higher than theirs.

Overall, I like the combat system. It is quick and easy, yet allows for some housekeeping of your resources.

Magic System
The magic in this game is very simple. You don´t learn or know spells but cast spells from scrolls you find if your intellect is high enough. In the same way you use wands until you run out of charges. There is no way to recharge an item and you will need enough mana potions to be able to use several wands with you. I found that even If I plaed a warrior type I was in the end dependet of having invested at least 15 in intellect to use the weakest wands. Some enemies just don´t take damage from melee and it helped med tremendously to use wands.

Character generation & development
When you first create your character you have a pool of attribute points you can distribute as you wish. You also pick your alignment but I have never found any use of it.

You gain levels in this game by visiting a trainer and paying gradually more and more for each level. Each level then gives you +1 combat skill, + 2 hitpoints, mana and stamina as well as +2 attribute points you could freely choose to spend anytime you want. I found out that it was smart for me to save them until I needed them to solve a certain obstacle (climb/bash).

The effect of gaining a level is really noteworthy. I think that mostly has to do with the increase in the combat skill that are used as a comparator against enemies to determine you hitchance. The rating in which you raise a level is very balanced in the game and works very well. But that is also the only thing that has with character development to do.

I find perception to weak to invest in, even though I have had seen it find secret doors for me. That is because I try going into all walls anyway. I would suggest trying to build up your intellect to at least 15 in the middle game before raising your strengths further. It will become helpful.

The system works very well but since it is so simplistic I cannot give more than 2 out of 5 in rating.

I like all maps in the game. They are done with thought and even though you know how large each map potentially is, there are areas that use only a fraction of the potential space (natural caverns for example) which means you don´t really know if you miss out something. By looking at your automap you could figure out potential places for secret doors if you believe the whole map will be used. The maps are also very varied and well thought out.

The manual is well written but not very thick. It includes the most important elements of how to  play the game.

Graphics, sound and interface
Graphics in the game is very simple with no animations at all. It reminds me of an early Ultima game. But after a few hours I have forgotten about it and are immersed in the game itself.

Soundeffects are also quite poor but functional. The highlight is the music which do have some nice, catchy tunes and are made by Bjorn Lynne.

The interface is clear, fast and functional and works very well.

I had a lot of fun with this game. I played this game at every possibility in front of my computer from start to finish without never tire of it. It is a great first game from the developer and the best of all is that it is freeware. The sequel improve on most parts of this game and I plan to play it further on but I think I need something inbetween first.

So what is the hooking points of the game ? It is well balanced with quite tough default difficulty level which means you feel great accomplishments when you do progress. You gradually, but sparsely, get access to better weapons and equipment. You have limited gold which stays that way almost to the end which forces you to household on both your expenditures but also on how much of the potions you find you will use and when. I haven´t found any bugs in the game at all.

The game also includes a lot of puzzles and obstacles. With puzzles I mean things like riddles, secret doors, problem solving mechanisms (light beam puzzle, levers, traps etc). You could often solve problems in more than one way. It could be monsters that are too tough for you which you could lead away, kill under a grate or lock into a room. Or it could be your pure strength that allows you to bypass a puzzle by bashing a weak wall to get around it for example. I love these things.

The world is quite open and you could choose in which order you will do missions in each region but to unlock other regions you normally have to solve the hardest quest which often means you must be powerful enough. I think this system is a good compromise.

I must also say that its simplicity also add to its strength. It is so easy to get into and you never feel overwhelmed with information or boring long texts that could hinder your progress. The length of the game was just enough also. I would probably do less progress if it would be twice as big.