For a time I have been thinking of starting up the first person RPG Anvil of Dawn released in 1995. It is a true Dungeon Master clone but more polished. I played it back then and actually completed it but my memories of it is extremely vague so I must have played it intensely for a short time.

The game was developed by DreamForge Intertainment that also produced other rpgs like the Ravenloft series and Menzoberranzan. It was published by New World Computing that we know did the Might & Magic series. Unfortunately DreamForge went into bancruptcy in the year 2000.

The story is short, simple and a real classic. An evil warlord has gathered all minions of devil under his banner and left their traditional land by going over the great chasm known as the scar. Nothing seems to be able to stop them. Every defence has proven fruitless in the region of Tempest. It is said the warlord has been gifted by mysterious magic emanated from the land of desolation, a place few men has ever seen.

The last hope stands with a few adventurers who has volunteered to do something to stop this flow of magic and finally stop the warlord. One of them must succeed....

The game begins with you waking up last of the adventurers. You find out that they have already left the castle. The queen and her advisors have sent them away. You however, hasn´t been mentioned to anyone but the advisor himself since there might be spies everywhere from the warlord.

You have a few pre-generated characters to choose from. Warrior, Thief, Ranger and Mage and two mixed of these. Or you could spend your attribute points as you prefer for any of them. I choose to become a mage for this playthrough.

The attributes are Strength, Agility and Power. Strength determines damage dealt in melee and carrying capacity. Agility determines the ability to hit with weapons and Power decided how much mana you have and the strength of your spells. Naturally I put almost everything into Power.


After having been taught two spells (you could choose from which elementary school) from the court mage and selected a weapon type from the smith (I choose swords), I met the advisor who told me that the only way to defeat the warlord is to destroy his supply of this special magical pool he utilises. My first task therefore is to seek out help from the mage in the Dark Lantern.

But in order to get there I will be teleported to the Gryphon Keep which is now behind enemy lines and then try to make it for the Dark Lantern. I left the castle and found myself at the Keep in some basement. I have almost no equipment to start with except the sword I got.


The character screen is the only screen in the game in which you could control everything. To the left you see your character and you will eventually equip armour and weapons on him. You have the eye icon that gives you more information about a weapon such as damage dealt (thank you!) and weight. The hands symbolises something you wish to use lika a portion or other item.

In the middle is your inventory. It is not structured in any way. You could put items on eachother and make it a mess. The cauldron to the right of the inventory gives access to your spellbook. Below the inventory you find several small icons. The first shows you your statistics.  The large Power symbol indicates I have put 10 points into it. The sword symbol will show how much progress I´ve done into my selected weapon skill (swords) and when I will reach the next advancement. The same goes for my spells. The shield will show on average how much damage will be reduced from enemies attacking you. The other symbols indicate if you have any afflictions or are overcumbered (which reduces the speed of  mana- and hitpoints recovery).

Back to my mission. The keep was filled with guards in the lower levels. I started out in the wine cellar. Right from the beginning the classical dungeon crawler features turns up: preassure plates and levers. They were very straight forward though and not hard to use. While moving upwards more and more guards assembled. Many of them carrued keys which opens specific doors and not too seldom you find chests you could plunder. Most of them contains healing potions which increases your hitpoints or mana leaves that - surprise! - increase the mana.

Combat is very simple and straight forward. You just click like a maniac. Monsters could be more agile than you and you have to hit, backstep, let-them-follow, hit, backstep etc. You could see the remaining strength of your enemies as a bar below them. There are no different attacks you could do as far as I know. What matters is type of weapon, your skill, agility and strength. And of course timing....

After moving up one or two levels, here is what the automap looks like:

The automap is one of the best I´ve ever seen in a game. It is scrollable, you could access previous maps and all possible places like preassure plates, stairs etc are shown automatically. To be even more accessible, when you pull a lever or press a preassure plate and hear grinding noises you could immediately check the automap to see if a closed door is now removed. Compared to older games this feels almost like cheating but I think it is good. It lets you concentrate fully on the game which gets more streamlined.

After a while I found the prisons in which I found the Lord Gryphon himself dying. He tells me to find his friend and tell him what have happened. The keep was unable to resist the onslaught of the warlord. To prove we have a message from Lord Gryphon he gave me his signet ring.

Conversations in the game is done by selecting predefined dialogue words that opens up during conversation. If you get hold of the CD-version in Dosbox all speech is by recorded voices. I strongly recommend to get this version.

The game is so far pretty easy. It cannot be compared to the difficulty level of Dungeon Master 2 or Crystal Dragon. But I won´t say it is so easy as not to give you any challenge. From time to time you meet stronger opponents or traps that will kill you. Puzzles also get gradually more refined.

After a few hours I was able to find the exit from Gryphon Keep which took me outside. The outside map and view is one of the few things I remember from my first playthrough in 1995. It was outstanding at that time. You have an overland map in which you could see different places but you walk in a prerendered world step by step and the graphics flows forward. My mission was to get to the Dark Lantern and try to get help of the mage there so that was what I did.

Above is the entrance to the Dark Lantern. The path was destroyed when I first got there. But in Gryphon Keep I found a spell that was said to repair man-made objects so I tried this and - surprise - it repaired the bridge and I could move on.

The Dark Lantern met me with tougher opponents like the flying dragons that could fire bolts at you. The levels was pretty large and was filled with teleporters, preassure plates and levers. But also full of goodies. 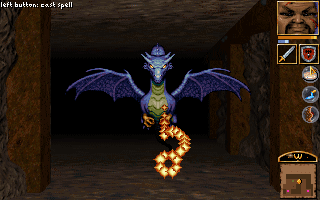 This is my mage Waska somewhere in the Dark Lantern. I have yet to gain any level advance. As a mage I still find that using the sword is the best since I want to save my spell points for healing. I entered Dark Lantern with two spells. My firebased spell and healing. In Gryphon Keep I found one more spell. A whirlwind that could push opponents backwards.

When - after several hours - I reached the top of the Dark Lantern I found the mage dead already. I had found a seashell though and since it seemed to fit the mouth of the fish I placed it there. The mages' spirit begun to talk with me. He told me that he had tried to defeat the warlord but he was much stronger than anticipated. He didn´t see any way in which to destroy him but then he gave me some directions that I should seek out the sunken ship. He should have done that before confronting the warlord.

He also told me that in the basement, deep down in the Dark Lantern I should seek out something which might help me. Hmm... 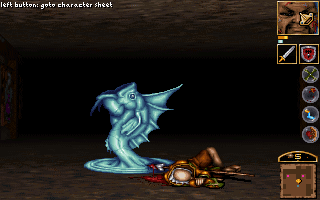 After finding the way down I met a summoned gargoyle who refused to let me pass. He was summoned to guard the passageway. I could also not fight him since he would destroy me easily. He said that the only way was to unsummon him in some way. I returned to find out if I could find some items to help me with this. 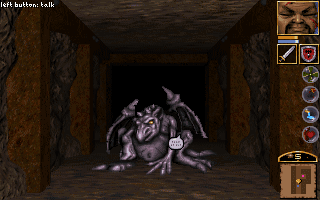 After mapping out a whole level I found a summon horn and some other items. A scroll told me how to use them and so I did in front of the Gargoyle and he dissappeared. I thought I now would reach something very valuable but no. In front of me lied several locked doors. Each required me to get the correct keys from small mazes filled with dangerous monsters or small puzzle games. 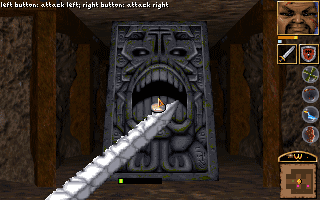 It was here I met a new death machine. A very tough fire breathing stone tabled that lashes me with a fire tongue. Fortunately I did have a freeze spell to use on it while I try to hack it to death. In the ned I found a few good items but nothing special. I did find some sort of summon horn and an exit leading to the outside. Since I´ve explored everything I had to get out of this place. I will now be heading for the sunken ship. 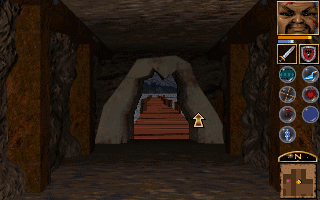 To be able to reach the sunken ship I used the horn to summon a water creature. It could take me to the Sunken ship but not directly. It would leave me in a underwater labyrinth in which I have to find my way to the sunken ship myself and at the same time trying to stay away for the danger that lurks there... 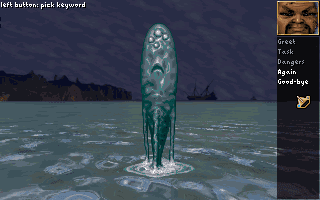 This post become quite large. The game was so good that I virtually forgot to stop to write my progress of it. Right now I am just entering the underwater labyrinth....