Much has happened in Dark Disciples since the last post. I won´t go into any details regarding my adventures as the warrior Denvall but I will briefly tell you of how the story has evolved and my experience with the game.

When I finally became a guildmember at the warriors guild my guildmission was to clear out a bandit camp and free six prisoners. All this took place on a totally new map and was pretty straight on with many fights.


One obstacle showed up and that was two traps that was so deadly that they instantly killed me. If you play a thief with high dexterity you might disarm them but as a warrior you have no skill to lean on. Here is yet another part that could be solved in another way. I found a cart I dragged into the building and pushed on the trap to trigger it. That allowed me to pass and get what valuables laid behind it.

My other lead in Middengrave was to use a captain to take me to the island my treasure map pointed at. He charged me a whopping 500 gold for the trip and I could go ashore an island that offered quite a resistance and also several obstacles. I actually didn´t made it very far. First of all, I have only found a few of several important orbs that are needed to advance in the sublevels of ancient ruins on the island. And what was worse, I could rest at the captains ship but when my food ran out I had no way to gather more food and the captain will want another 500 gold to return to the island if we leave. I had no choice but to retreat from the island without having found that much treasure at all. I´ll take on the island later on when I am more experienced.

When I returned to the capital I was able to gain another level and this time, the guild leader Saradin thought I was experienced enough. He had three tasks for me that needed to be done in order to get rid of my debt. Every task was handed out by his taskmaster that gave the details about the mission and also which levels was recommended.

I naturally choosed the first and easiest one. What happened was that I was sent far away to an icern kingdom with landscapes covered in snow. I had to help the ruler there with certain tasks like returning the urns of long lost kings that could be found deep within the mountains. I also had to try to find another way across the newly found cavern that appeared after an earthquake. That would decrease the trade length with neighbouring kingdoms. I have to say that I am very impressed by the missions and npc interactions in the game. The developer has done a good job in trying to be original.

This new kingdom was scary in that it was not possible to return back to Middengrave or any other places until I had completed my tasks there. Fortunately the starting locations offers all neccessary things like shops, armourers, trainers and resting rooms. Just when I left the protecting city to get out in thecold regions I immediately started to take damage for every step. This remined me of Ishar 2 and I remembered that I saw fur armour in the shop which gave very little armour. I returned to buy it and could then withstand the cold. 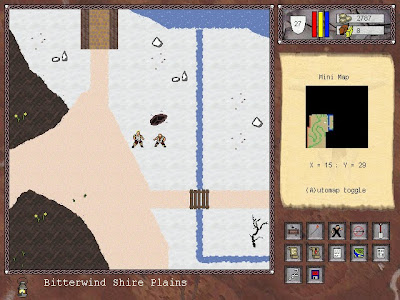 This region consisted of several maps both overland and underground in caves and caverns. Also, apart from the main quests here there where several minor quests that I undertook. There where a lot of problem solving. From how to pass a ghost on a bridge that required an answer to how to actually find the urns that where well hidden behind secret doors, traps or levers that needed to be pulled. I got stuck several times and in one or two occasions I had to look up the hints file that are available but most obstacles I solved by pure luck or persistence. 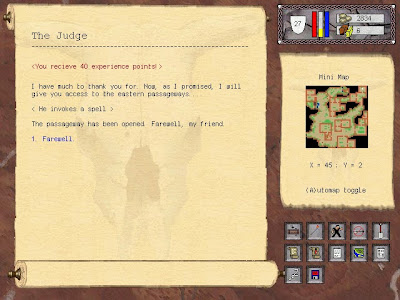 One strategy I take is to not spend all available skill points directly when you increase a level. This allows me to instantly upgrade an attribute when I really need it, like when I found a door that I am not strong enough to bash or a climb where I am lacking in agility. I then could put my points into theese attributes which means I often meet the requirements to do what I want directly. This was what solved many of my problems. 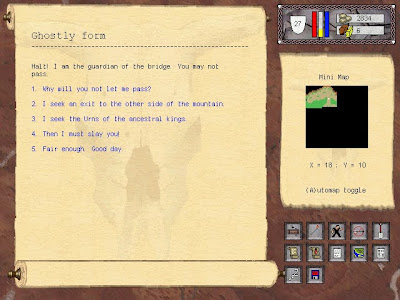 I eventually found all urns and found a way across the mountain. I also picked up a lot of new good weapons and armours. Since there is no random monster generator in the game (which is good), you have limited places where to rest and heal and often have to retrace several maps to safe havens. You could however save anytime, even in combat and I have used that several times to slay foes effectively without having to retreat to heal and come back again (monsters wounds are saved).

After several hours I was finished with this region and was allowed to return to Middengrave again. My debt was decreased to 80.000 gold. Mind you, I have only a few thousand gold at a time in cash and they are needed to buy healing, blessing, curing injuries, poisons and diseases as well as restocking with healing potions.

The next big assigment was to send me after a woman named Mitra that had stolen some very important document from the guildmaster. She was last seen in a swamp region heading for the Flayer Temple. In this very hard module, you could return to Middengrave anytime you choose. The region is a swamp region with rivers and woods. Here I found humanoid remains and my first contacts with future technology. I normally don´t like such tecnology mix in RPGs (like in Might and Magic) but here it reminded me of the modern time UFO phenomena which belongs to  one of my greatest interests. 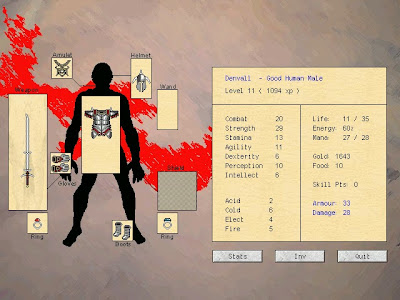 By helping the village elder to get rid of a visiting priest trying to convert his followers by foul means I was guided to the temple of Flayers. It was full of zombies, hard-to-kill spectres and other foes. The temple complex spanned several levels and I was about to give up in the end. I lacked the final ingredients in order to get to Mitra. I had literally fought myselves through devils to reach this point but was totally stuck and no help could be found on the internet. 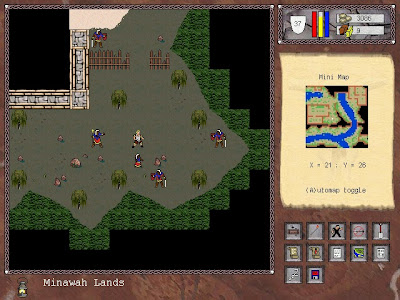 I decided to give it another go by first returning to Middengrave and search all merchants stocks. Perhaps they had my lacking ingredients ? That was hopeless. Then I decided to go back to the swamp and search every possible way of having overlooked a secret door on the half dozen maps it spans. I found out some other things and even completed some quests I`ve forgotten about but no ingredients could be found. I could even enter an alien base found in the swamp and trigger what seems like an nuclear explosion. That didnt help in anyway (reload was in place).


I finally found the secret door very close to where I got stuck and was so happy because I didn´t want to give up on this game. With the missing ingredients I could perform a ritual and open a door that led me to Mitra. I killed her and searched her compartments where I could  retrieve the documents. I returned back to Middengrave in triumph.

So now I am back in Middengrave again. My next task will be to sign up for the last major mission and hopefully I will be free of my debt.

Dark Disciples reminds about Eschalon but is much more simple. Yet it allows for much freedom of exploration  and are so far perfectly balanced regarding to the difficulty.