Last time in Dark Disciples, I had just arrived at the capital Middengrave. This was the first city in the game so far. It consisted of a lot of different places to visit. From libraries and museums to inns, trainers and guilds. My first challenge was to actually enter the city. For that I needed a pass. This was not very hard to obtain though, costing me 10 gold. Before I actually entered the city I found a secret passage leading into it through the walls.

Perhaps I was lucky in that because just prior to entering the city I was approached by a man offering me to smuggle in some goods to a companinon residing in one of the citys inns. Naturally, when I had entered the secret passage I immediately headed for that inn to get rid of my illegal goods. It gave me well needed 120 gold.

Always when entering cities in RPGs I explore them throughly and methodically. Going from each building to the next, careful not to miss anything. I went ahead with just this approach here. It took me at least an hour because the city spanned at least three full maps. Here I could try to join the temple, mage guild and warriors guild and I eventually applied for the warriors guild as the first one. In order to be accepted I had to fight through five arena fights that gradually got harder and with several opponents at once. I had to return to the arena at least twice after having increased in level. 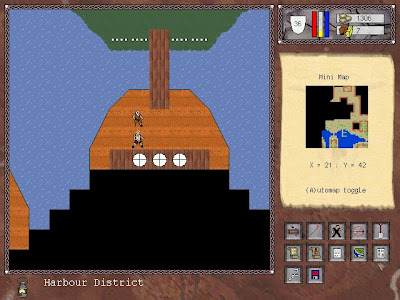 But I must not forget about why I am here, so I looked up the guildmaster Saradin and told him I cannot possibly pay 100.000 gold that my father owned him. He couldn´t care less and wanted more or less to kill me on the spot. I just barely had a chance to suggest to him that I could work for him in order to repay him this debt and he actually accepted that. But he said that I should return when I have become more experienced. This rather easy way of solving that problem surprised me in the story. I thought I would be forced to to something immediately. Not so however. 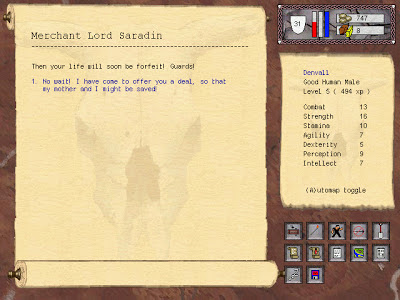 I did not have much to do in the city after this but I had gained one more level and felt I should go back to the firestone ruins to take on the lower levels. At this stage, level 5, I can defeat lesser mummies but my weapon cannot hurt ordinary mummies or zombie mages.

The game really offers different ways in solving problems. For example, if you come to a door you could either bash it (which requires a certain amount of strength), pick the locks (you must have enough dexterity) or perhaps using a key you have found. The first two could be accomplished when you gain a level if you put your points into the appropriate skill. Sooner or later you meet the requirements.

To get the key for a door might be very troublesome. In the firestone ruins there was a locked door in the south I´ve forgot about. Even though I had increased one level I could still not bash it BUT I remember I met a thief nearby before. By going back to him again I could use his skills and pay him 200 gold to pick the locks. OR, as in my case. I opened up a room to a dangerous mummy, led it out and returned to the room and snatched the plague key still with the mummy chasing me. If you are not careful you will get cornered and killed by the monsters but sometimes running past them just to plunder what they guard is very rewarding. I really like the different approaches to solve problems.

Deep down in the ruins and behind the locked door I eventually found a way to lower a bridge over an underground stream and got across to the other side. Here I met zombie mages which I couldn´t hurt whatsoever so I left them in their rooms. I also got to a temple which prevented my access through an invisible force. A sign outside said that only the sick and dying will be blessed. To enter I had to drink from a poisonous well and then I could enter this undead temple. It is such challenges that exists here and there. Sometimes there are preassure plates that you have to press down by moving carts over them. Those carts requires thought in how you move them because you could only push them from one side and often you have small spaces to move in and run the risk of getting the cart stuck against a wall.

Fortunately, exiting and reentering a level restores the positions of the carts. Monsters does not respawn though. As long as they are a few steps away from you they will follow you indefinetely but if they get stuck you could run away from them eventually.

I won´t go into details about my other adventures in the city but some highlights of my adventures has included:


I also finally got enlisted into the warriors guild by killing the final monster which was a hydra. It was much easier than expected. As a reward a got a +1 strength and can now receive missions from the warrior guild. 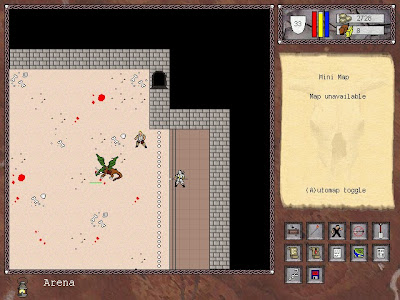 Before I end this entry, I want to tell you that the music in the game is by Bjorn Lynne. He is formerly known as Dr.Awesome when he did music for the norwegian broup Crusaders on the Amiga demoscene. Anyway. Some of the tunes are really good and fits well into the game.

Ok, this pretty well ends this entry. I now have two major tasks ahead of me. One is the warriors guild task of killing some bandits and the other one is to hire a ship to follow a treasure map I´ve found. More of that in my next post.

I have now raised to level 10 and bought the best equipment I could found. Unfortunately one cannot be a mage and a warrior at the same time because using wands or scrolls costs many points invested in intellect and then you will have lesser strength and far poorer weapons to use.Mi