Phew! This last major mission was by far the hardest so far in the game. Not just the foes encountered but the puzzles as well.

The last major mission module took me to a land much like our ancient Egypt with pyramids and buried pharaos and much of the mythology that comes with it. The current ruler wanted me to seek out four ankhs that was buried in different locations in his land. But I am getting ahead of myself here.

It really started out with a long ship voyage in which I was aboard, waiting to reach the land of the pharaos. Onboard the ship I had too solve a ghost mystery, witness pirates attack, make a hard escape only to find my drifting alone in a lifeboat in the end. 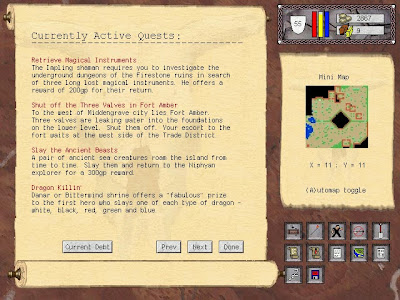 It was then help came unexpected from a seacreature that took me down to an underwater city and cast a magic spell on me so that I could breathe down there. In order to thank him for rescuing me I put myself to the councils disposition and helped them out to find out what had happend to a defected council member thought of as a traitor since he seemed to have used his knowledge to turn neutral creatures against the small community. It was an ordinary city with inns, temples and shops and with that as a base I begun to undertake not only the councils mission but other small missions as well. After a few hours I had solved it all. The alleged traitor was in fact held prisoner and was forced to reveal his secrets. That secret was used against the council. While he did reveal how to counter the effects, he preferred not to return. With the council happy of my help they allowed me to leave to the surface world again where I was stranded on an island not far from my goal.

On the island I had to solve a puzzle and then wait for a dragonrider to come by and pick me up for the rest of my journey. After some sleep she arrived and finally got me to the land of the Pharaos. The Pharao wanted me to find four ankhs that was buried at different places in his land, all protected by traps or clever obstacles. 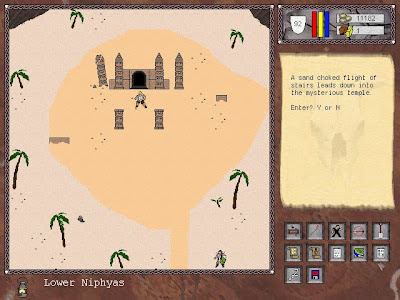 When leaving the palace I was approached by a spy sent from my employer that told me that I should not return the anks to the Pharao because he will betray me. Instead I should deliver them to my employer instead.

Well, first I need to find them and so I set out to discover the entrances to them. This egyptian world spanned two overland maps and at least 4 different subterranean with several levels. I found a smith that could assemble my three parts I´ve found for a doomaxe that made 45 points of damage. I felt invincible but that soon led to some dissappointment since most foes are very strong and hard to beat here.

I soon found all places and begun to explore them one at a time. Sooner or later I was stuck in each of them since there are a lot of puzzles to solve. I either need items I´ve not yet found, or know about passwords that I´ve had no clue about. One of the challenges was to solve a lightning beam puzzle by redirecting lights through different gems yielding different colors. The right color should then struck the wall section with just that color. Eventually new hidden passageways was opened but I have to admit I had to look into the hints book for this.

I also got stuck on a riddle I couldn´t solve and had to google for an answer for that one as well. I would say there are dozens of major or small puzzles one must solve and most of them I managed but I did have to cheat a bit for not getting stuck completely. At one place I had to get past four invincible creepers. They could not be damaged in any way. I had to lead them after me and trying to lock them into different rooms by closing the doors behind me. 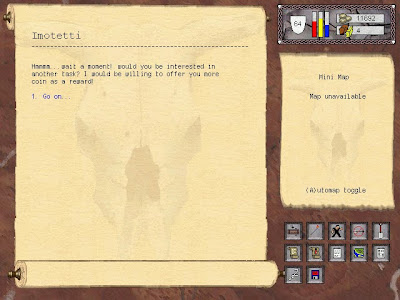 One of the most helpful potions in the game is the potion of dissapperance. With that you could move around 20 steps without the enemies seeing you. The potion is expensive and hard to come by and could not be bought anywhere. But it helped me pass very difficult areas. Also, I found out that I had to invest in intellect to use the less powerful magical wands. It was the only way for me to kill or hurt certain monsters.


In the last city you could not buy or find food anywhere so the only way to heal up is either to pay for healing at a temple (which will be expensive in the long run) or use a magic well I found in a pyramid. I preferred to run back to the latter one.


This last module is filled with new magical weapons. But the problem is that they only match the powerful foes you encounter here so you will never feel strong enough. The shops seldom have any good weapons to buy. Most of the good weapons and armours are found. 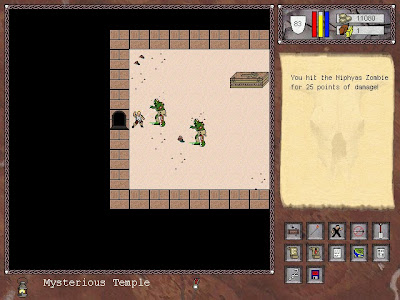 When I finally hold all four ankhs I was i triumph. I decided not to return them to the pharao but to my employer instead. In that way, I could travel back to Middengrave. I had completed my quest and Saradin was really pleased with my efforts and offered me to continue work for him in the future (planned as expansions to the game). I accepted but immediately returned to my mother to tell her of the good news. I achieved level 25 with my warrior when the game was over. I could still return back to any place and complete my unfinished tasks but I was content with having won the game and decided to leave it at that.

In the next post I will review the game and then I will finish what little I have left in Dragon Age 2 before jumping on another game.