While browsing the internet I came across an old RPG called Aethra Chronicles. A few screenshots and a short introduction revealed it was released in 1994 as a shareware game. Later it seems it was released as freeware although I haven´t found any official site for this old game. Nevertheless, this game seems to be an old lost gem. So I decided to try it out and give a small report about it.


This game has to be run under Dosbox. It was no problem in getting it to work. It was thought this game was to be the first in a trilogy, but I have not found the other ones. After a short animation during the intro you are taken to the main menu where you can create a new game. The manual is very short and brief. It only briefly discuss the game mechanics but not much more.

The background is that your father was the kings main paladin\champion. A title inherited many years back. But events led to the kidnapping of the new kings child and blame was set on your father for the security breach and so he was imprisoned. No one knows where the kings child is or whom is responsible but unless you can find the child you will never be able to recuperate your fathers position and in that lies your legacy as well. So with your two best friends you decide to do something about this.

You start with three characters, wheras one is yourself. You have to roll-up each and every one and pick a race, class and distribute skills points. You start at level 3 while your comrades only start at level 2. It is said this game relies on the Runequest game mechanics but since I have never played the tabletop Runequest RPG, I have no clue.

I didn´t want to spend too much time on creating my first party to try this game out so I only spent a few minutes re-rolling each one. You have the usual attributes like strength, agility, constitution, intelligence and wisdom. Then there are the more unusual ones like Presence which is how you interact with others and influence the skill trading. And then there is Memory which affects mythic lore (the knowledge of monsters) and Read Runes. Last but not least, there is Reasoning, the ability to solve problems that affect woods lore and mountaineering (decides the speed you travel through  mountains).

I had to roll up all three at once without the ability to save in between each character which is common. That means I certainly made some mistakes along the way. For example, it usually isn´t good that two characters are very good in the same lore or non-combat skill. Anyway, there are quite some skills in the game which makes it more interesting so far. You have pick locks, disarm traps, item identify, spell list, spell points and detect traps just to mention a few of them. Since we started out beyond level 1, I had the chance to select first the skills for level 1 then for level 2 etc.

But skills and attributes are also decided by which race you choose - but in what way the manual give no information. You can choose between human, dwarf, elf, half-elf and hobbit and then you have eleven character classes from the traditional fighter, rogue , cleric, and sorcerer to the more special ones like ashikari (warrior mage) and mentalist (spellcaster who manipulates the mind). I decided to go for a dwarf fighter as my main person and then one half-elf cleric and one elven conjurer. I have no idea which composition will be the best but I am sure I will have some second thoughts about this in just a few hours of gaming.

Right at the start, I am told by the old Vizier that there probably was dark magic involved in the kidnapping and that my father had even mentioned something about an evil cult. As a first step he wants me to get a book called "Prophecies of Doom" from a merchant in order to learn more. 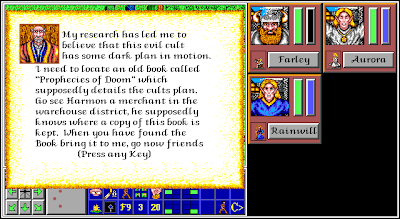 So I set out to explore the city. Travelling takes places on an overland map with small buildings and with your party even smaller. You cannot se on the building which kind of building it is so you have to try to bump into them to see if it is a shop, guild or - as is most common - nothing of interest. The city - which happens to be the capital - spans several screens in every directions. There is a castle, a cemetary and several districts. You could always choose to speak with the shopkeeper, innkeeper or whoever you find in the houses. Most of them have some rumours to tell you and I found out that a priest seems to have dissappeared in the cemetary and that there are bandits north of the city.

We don´t start with any weapons or armours at all but have a few thousand in gold so my first task was to get some basic weapons and armours. I had to save before buying anything since you don´t get any information about class restrictions. The only way is to try. After half an hour I had let my own character - the dwarven fighter Farley - get a Flail with a shield and some basic armour. My half-elven Cleric got a morningstar and some armour and ended up having far better armour rating than my fighter. My conjurer - the elf Rainwill - couldn´t wear any armour at all. 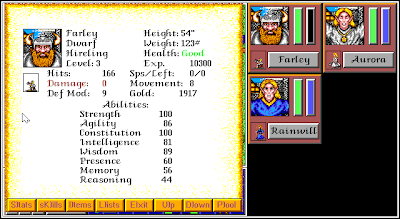 I also find my father imprisoned in the castles own prison. He wanted to talk to me and said he had found out from his own sources that someone or something had managed to open a gateway into the dimensions of demons. A human sacrifice is one way of opening the gateway even though my father didn´t think the kings child would be needed for that. Nevertheless he urged me to investigate this. 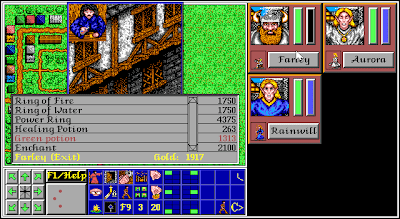 After awhile I found the merchant that had the book the vizier told me to get in the very beginning. He wanted me to do a favour first which was to recover a painting of this wife that had been stolen by thieves supposedly hiding in some ruins in the south of the city.  At this stage I had two concrete options to explore. I had found a house to enter in the south part of the city which leads me to believe this might be the house I am looking for in order to get the stolen painting. But I had also found an entrance that leads below the cemetary. The latter part sounded more like a thrill so we went down there. 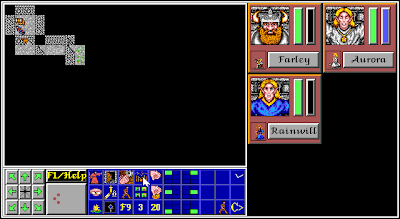 When entering dungeons the perspetive stays in a topdown view of your group. Everything is dark but gradually the map is discovered for every step you take. Unfortunately the map returns to black if I save and restore a game. I lack torches and lanterns. Perhaps that will have an effect ? I only managed to explore a few steps before I was assaulted by skeletons. The view shifts to a top down tactical battle field which takes into account the exact locations of where you stood. That could give you some slight tactical advantages since you might be able to block door entrances. That remains to be tested. 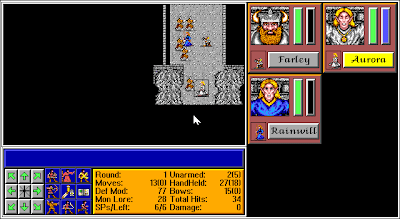 Combat gives you a new set of icons to choose from. Every character has a move scoore and it seems at least one remaining is required in order to make a melee attack. You could choose to attack with a hand-to-hand weapon, unarmed, with ranged weapons, casting spells, parry or retreat. If you retreat it seems you end up randomly a few squares from the hex in which the combat begun but other than that I haven´t seen any drawbacks. When attacking your eligible targets are highlighted and you have to  select them in order to place an attack. I let my conjurer Rainwill use his spell magebow in my first combat just to try it out. It was pretty effective but cost 3 or 4 spellpoints and I only have 12 so after that he was literally useless in all other combats. 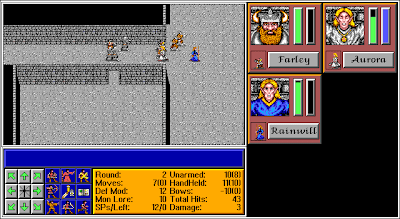 My cleric is my melee fighter because of his high armour rating, while my figher fires his longbow until the enemy gets close. The actual damage dealt or received is never displayed. Instead you are given a short description of the attack which after a while lets you understand how successful and hard it was. You could also use mythic lore to get detailed information about your foe, including its special attacks, hit points, defense rating etc. We´ll see if that will be useful later on in the game.


After combat you don´t get any information about XP received and so far no foes have left any equipment. I did find a chest though which I looted for a good shield and a weapon together with some gold. While I explored the dungeon I got information that I discovered a secret door. This is based on the Perception attribute and checked automatically. It is too early to know wether there are a fixed amount of combats or if they are random. There have so far not been any context based texts associated with them.


This underground complex turned out to be larger than what I had thought. It spans several screens and combats now involve zombies, skeletons and even a ghost. But the latter was too hard for me to tackle. After exploring the first screen fully I tried to camp to regain lost spell points. It didn´t work and I figured it might be because I lack light or any other sort of equipment. I left this place for later and returned to the city. My plan now is to return later on to this place but first I want to search for the thieves.

My first impressions so far is good, as they always are in the beginning of a new game. The interface is a bit clumsy and not very intuitive so it gets me frustrated. For example, you cannot go through each and everyone of your partymembers easily. You have to exit the screens and select another member manually. So a bit of struggling with the interface is required. It is also not very responsive. I have no idea when I will gain a level since the manual does not hold that information but I believe I have to find the proper guild to train.

One last thing. You could recruit other members at different guilds. I don´t know the costs or drawbacks with that. I can think of two. You either have to share the XP points between all your members or they require a continously amount of gold to stay. I think I would do well with another fighter right now. But let´s see what happens later on for right now I just want to return to the game....