For the last few hours I´ve made the attempt at starting up Ishar 1 - Legend of the Fortress. The game has pretty ok graphics for a 1992 PC game and I fiddled around for an hour with it after having read the short manual.


The interface takes time to get used to but I moved around and recruited my first follower as seen below who turned up to be a thief. One thing the Ishar games were famous for was the interrelated morale and opinions of your party members. Some might not like each other which could affect quite a deal of the game or refuse you to recruit a certain person. 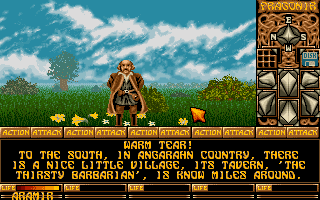 There is an ingame map of the land but your location is not visible so it is not of too much use even though I know where I begin. I met some wandering monsters and built up my first character to level 2 very quickly. I noticed it drains physical strength to fight as well as draining your life points when hit (what a surprise!). You won´t recover life points by time so you have to eat to restore it. Eating could be done at taverns found in villages but food is expensive. 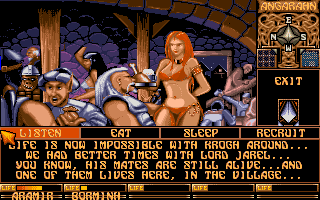 Fighting is done by fast clicking on the attack button and it happens in realtime. I am not sure what I would gain by letting other characters attack as well since the recovery rate is so quick with one character. Anyway, what I really wanted to come down to with this quick notice about Ishar is the reason for me not to continue with it.

Saving a game costs you 1.000 gold. That is pretty much what you start with in the beginning and you only get gold by slaining foes. That gold is needed to heal you. I can see the picture before me further into the game. I would only save when neccessary, taking great risks between the saves and in the end only get me frustrated. This reason alone let me quit the efforts of starting with Ishar 1. I am not saying this game does not have potential but when there are so much good old CRPGs out there still waiting to be discovered, this piece is not for me to pick up right now.

I know its sequel Ishar 2 does not have this rule. So lets try that out....