The Ishar series was probably Silmarils most successful RPG trilogy. Silmarils was a french computer company founded in 1987 and produced games for most formats at the time. In 1993 they released Ishar 2 - Messenger of Doom, an RPG adventure based on the success of Ishar and its predecessor Crystals of Arborea. It was released for the PC, Amiga and Atari ST platform and scored well reviews at the time.

I chose to play the PC version because it is easier and faster to play than the Amiga version, even though the music is vastly inferior. I had some trouble to get it to start first in DosBox but after some searching around I found out that you have to change the IRQ for your soundcard (Soundblaster) from 7 to 5. Then it works flawlessly.

Anyway, the game starts with your main character Zubaran on an island. The manual that I have available contains no background story at all but I´ve found out that I am apparantly new lord of Ishar and I have in a vision been told to defeat the sorcerer Shandar.

Just a few hex in front of you are three bandits. I think I died three times trying to confront them with my short sword.

After that I begun to explore the island instead and found a boatman expecting gold to take me from the island but I figured that must not be the case right in the start so I continued my explorations. I soon found a square object with a skull within in front of a golem. I took the object and the Golem came alive and killed me quickly. That was obviously not the best tactic.

I choose other directions on the island and made it to some sort of swamp. Unfortunately I was attacked by  goblins that lurked there and soon I was dead again. I found some mushrooms and thought some of them might restore my health but they turned out posionous and I died again. Puh! Trial and Error anyone ?


Reloading once again, I thought that perhaps I am to fight the bandits in the beginning after all so I attacked them one at a time and managed to kill the first two and still had around 70% of my health left. Unfortunately the third one - hovering over a corpse he recently killed - turned out to be really difficult. I think I tried to kill him for five times before I gave up. Surely this cannot be the way it is meant to be. I reloaded prior to meeting the third bandit and explored the island once again.

This time I was more lucky because I found a village. Now this is what I am supposed to visit first I thought. Here I could recruit companions and then we would be able to defeat the last bandit amongst other things. I first found the village chief, Gordbnoeuf, but he didn´t tell me anything useful so I continued to look through the village. 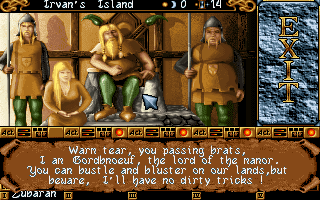 I found the tavern in which you could listen for rumours, eat to regain physical stamina or sleep to regain your healthpoints. Each of them costs money and it is dependent of the size of the group you have. So there is a reason not to take on too many followers at once I thought. 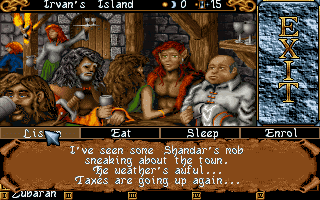 The last option at the inn is called Enrol, and allows you to try to recruit several companions. You have the ability to see their statistics and level first but not their gear. They are all joining your team for free but for every new NPC you try to recruit, your existing teammembers must cast their votes in favour of your selection. I ended up with recruiting a knight and a priest. The priest had two spells right at start and one of them was healing. I quickly healed Zubarian. You start out the adventure at level 5 and those you recruit are either at level 4 or 5. Since they don´t carry their own equipment but some gold, my first mission was to try to equip them with some weapons.

In the village there where the chiefs place, two inns, one armour shop and one weapon shop. I bought a sword for my new knight companion Karon and a leather armour for myself (Zubaran that is). It cost me almost 4.000 gold. After that I found out I could click on the island of my map to get a close up view with my party as a blinking dot. I had missed that. At least I could roughly orient myself. But there are still no option to label anything so one has to remember every place of importance for a later visit.

Anyway, the village could be seen at the northwest. Southwest of the village where the Golem with the skull square. I stole the cube of death, but could not escape unless fighting the Golem which was pointless. He would not die and we where unable to inflict any damage on him. At my next reload I thought I would take on the final third bandit so I located him in the center of the island and this time the combat was much less challenging, even tough I had to retreat and let my mage Yornh heal both warriors again and then throw them into the fray one last time. When he died he left quite a large sum of gold representing all I had spent so far. The dying corpse turned out to be a woman who told me some very carefully choosing words. I have to save Kendor. Why and how is a totally another matter.

Now there where only one more place I knew of which were special and that was the old man I found during my initial explorations of the island. I found him far to the east and for 10.000 gold he offered me something. Eager to try it, I saved and gave him the gold he asked for. His only response was to say "Launch your eagle, it will travel for you". I stood dumbfounded. Was this all ? I didn´t gain any item or spell or anything more than these words. Quickly I reloaded and decided this was not the best investment for my gold for the time being.

At this point I had no more places I knew I had to visit and I thought I´ve explored almost the whole island. There were always the chance that I´ve missed something. The movement is hexed based and the graphics is very varied, making it hard to distinguish exactly where I am unless viewing it on the map. Small items could be hidden here and there but it has so far been different types of mushrooms and plants I´ve found.

While exploring the swamp on the eastern side of the island I found a really tough swamp creature using two swords at once. I was unable to beat him despite that I retreated to let my mage heal us up. I ran out of magic points and was eventually killed. He and the Golem are now my unsolved remaining mysteries.

I returned to the village. This time I was inclined to recruit a mage with offensive spells. I found one that had fireball and recruited him to my group. This was just a test so I returned to the swamp creature and attacked him like before, but this time my mage hurled fireballs at him. I could not defeat him even then, so my next try was to reload and this time recruit an archer instead. I bought a bow and arrows for over 3.000 gold. Pretty much money. Now, this monster must die at my hands or is it intended that I should come back here later in the game ?

I attacked the swamp creature again, but this time with an archer. If you are lucky the creature won´t follow you if you retreat and that happened to me. I could shoot arrows at him at a distance and he wouldn´t even try to come close. In that way, after 40 arrows and a few melee attacks, he was dead, leaving a necklace to be found. I didn´t know really what to do next except to return back to the village because this swamp creature had at least 10.000 gold and I needed to buy more arrows. Before returning to the village though, I stopped by the small harbour again but nothing was new there so I continued.

In the village I bought more arrows and then returned to the lord. He just sat there but I tried to give him the necklace and then things started to happen. As a reward he gave me the only boat that exists on this island. Great!

It was in the middle of the night when I arrived at the small pier once again. This time I could go right to the boat in the end. It was then I remembered I still had the problem with the golem. I tried to meet him again, now with my archer but it was impossible to invoke damage on him. I even tried to use the skull relic against him without effect. I decided that I might have to return here later on in the game when I have got stronger.

I took the boat and was ready for whatever the adventure would take me....

In my next post I will go through the gaming system in more detail and what I think so far.
Upplagd av Saintus kl. 8:55 PM