Ishar 2 - The city of grinding

I arrived at Zach´s Island in the middle of the night just outside the town in the harbour area. I had no choice but to enter. A quick look at the automap showed quite a large town.


The game uses day/night cycles and at night most establishments are closed. So I had either to find a teavern to sleep at or wait out the time. I explored the town and saw several signs here and there of places I must visit at day. Once again, it is unfortunate you cannot label anything on the map and I am too lazy to draw a copy of the map.


After a few minutes some shady figures emerged and attacked my party. It was obvious these were not as easy as the goblins on the first island. I killed them but was severely wounded. They didn´t left anything to pay up for it neither. If at least they would have left some gold to help me regain the lost strength. I continued my exploration for a tavern but was soon attacked once again. This time I was not so lucky though and my party was killed.


I reloaded to after the last fight and took another route. Soon I found a tavern. We both ate and slept there but had to pay 2.000 gold for it. We stepped out on the streets again and now it was late in the day. I was irritated to have slept through most of the day without any means of altering the sleeping time. Now I had to make the best for the light that would still shine the streets. I found a blacksmith and bought the most expensive melee weapon he had, a schimitar giving me +8 instead of + 4 that my short sword are labelled as. I thought I would need it in coming fights. The rest of the money, around 12.000 gold was to be saved for when and what I need when I know I need it.

The night replaced the day and I found myself straggling around the dangerous streets once again. I found what seemed like a town council and decided to wait out the night just outside this building. When day approached I entered and met the commander-in-chief of this city. He wanted me to bring little Zeldy back to him If I find her. 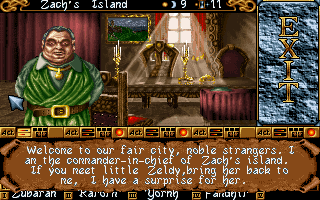 I was quite surprised when stepping out. It was night again! The time does count inside buildings and I took a pause there. But I can´t see any evidence of the group having lost any physical stamina because of that. I think it only drains during fights. When your stamina reaches zero you don´t have the strength to swing a sword anymore so that is very important to keep an eye on.

I continued my exploration of the city, working my way from north to the east of the map.

After awhile I was almost out of physical stamina which meant I could soon not defend myself and I hadn´t found a tavern for awhile. I begun to backtrack my steps but was attacked by thugs at the same places as before. Either they respawn or are random. In any event, this is very dangerous because I could get trapped in an area without having any chance of escaping due to lack of stamina. I would then have to return to an older saved game.

It was then that I begun to change tactic. I had been at almost the whole town except for areas with a lot of town guards that attacks when I approach. I begun by spending almost all money except a few thousand for food and rest, on a fire sword which gave me +12 !?. I suppose that is much better than my short sword at +4. I immeditately noticed a slight improvement in the fights. I had yet to find any task in this town except for the strange rumours I´ve heard. One of them was to meet a man at night at four towers square. How should I know where that is ?


Anyway, I run around the city in search of bandits. My intention was to gather more gold and be able to buy better equipment. After one hour doing so I got a little frustrated about all the different shops in the city. The automap does not list them and it is impossible to remember where they all are when you need them. So I had no choice but to copy the automap, enlarge it in a document and start putting numbers on each shop. I then visited every armoursmith and miscellanous shop to list their items and prices in a table. In that way I knew where everything of importance was in the city. 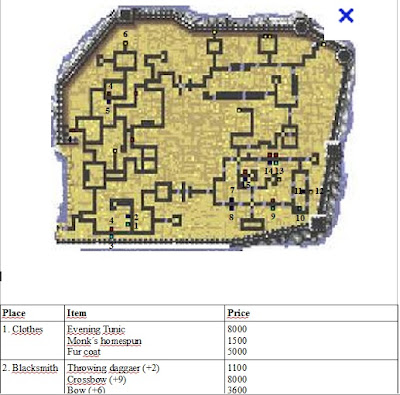 My next task was to methodically build up my money to be able to afford more expensive equipment. I soon found the perfect place to hunt for thugs. And yes, they do respawn. You just have to go less than 10 hex from them and then return again. There could be one or two of them but they are always there. I started to grind. After a few hours I was up to level 11 with my main character and the others at level 10. I got enough money to buy a magic sword, two plate armours, two heavy shields and two heavy helmets. For every advance of equipment I took less and less damage from the thugs and they where killed quicker. This in turn led to more money since I needed to rest less often.

Some reflections of the game so far:
After my grinding and mapping of the town which took some hours I felt I was ready to try something new. Why not begin by returning to the first island to try to defeat the Golem again ? I did so and this time I could actually injure him but in this fight you could not retreat so despite two attempts I was still killed by him in the end. He must have several hundred hitpoints. He is too strong for me still, but at least I know I can defeat him. I just have to buy even better equipment. I reloaded and took the boat again but not to the city but to the new island and found myself in some sort of catacombs. 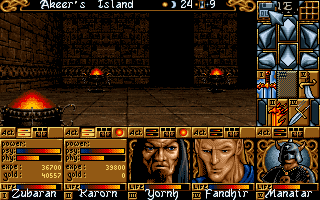 I begun to explore this and soon met a group of skeletons. Eager to try out my new group I attacked and they where not that hard after all. Unfortunately they did not leave any gold but I continued. It was soon apparant that this complex had a lot of corridors and there where no automap. I run the risk of getting lost but wanted to go further into the complex. After searching around I found a skull and two throwing daggers and a few closed doors. I eventually also found several levers that I did not pull. Even a spear trap caught me by surprise in my exploration. But what brought most enjoyment was when I found a pile of 10.000 gold lying there.

After 10 minutes into this complex I realised I had to start mapping this place and begun to backtrack my steps to my boat again.

What I didn´t like was that all skeletons already killed in my exploration was back again at their original positions. If I would have been just a little weaker when returning I might have got trapped. You could try to evade them but that is not alwasy possible. I do not like having to fight the same battles over and over again. I must be really strong then to plough myself through this complex and be strong enough to return as well.

When I came back into the town again I took on another 3-4 battles with the thugs and then had almost 50.000 gold. I bought an Axe of Chaos for 25.000 gold giving me +25. That is the best weapon I´ve found in any shop so far in the game. It is slow to attack with but does tremendous damage. Well, that is to say I´ve seen it score 22 points on a single hit. After that I thought I should try the townguards once again and this time I killed all 9 of them. But there where nothing behind them! I felt cheated. My last thought was that it was night now and perhaps something will turn up in the day. But nay. Well, at least the battle got me more experienced. I was now at level 12.

I looked for other places with city guards and found a place just on the back of the towns bank. I killed them all and ended up robbing the bank of 100.000 gold! A tremendous amount of money that will come to great use equipping me with the best the town has to offer. 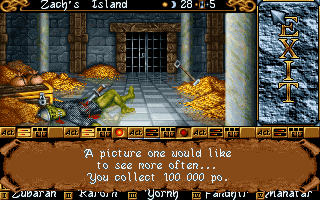 I think my next task is to return to the island and start map it throughly....