After getting back to the city from the tomb, I begun re-equipping myself again. I still had some areas umapped of the tomb. I made my way back and begun to explore the levers and closed doors I've found. I tested them one at a time and searched for the effect of each and everyone of them. The first lever opened a door that eventually led me to a crack in the wall where a mageskeleton hided.

He attacked me with spells but I killed him quite quickly. Behind him I gathered around 30.000 gold and another skull that I brought with me. Yet another lever opened up a door with some more gold and another lever. The last lever led to a continuation of the complex. After some exploration Fandhir in my group noted he felt some sort of draught, meaning there must be a hidden wall somewhere. I tried out the walls nearby and found it. This was the first secret door in the game I´ve found so far. I entered.


The corridors led to a spiraling square where the niches where full of gold. I gathered another 30.000 gold here. The corridor ended with a closed door. Some moments later a huge axe-wielding executioner appeared and started to attack me! 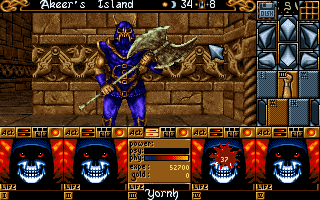 As you can see I was killed quite brutally. It was obvious I was not ready for this fight yet. I reloaded prior to meeting this guy and begun to return back to the exit. I had only strength left for one or two fights and had to try to run past the skeletons that now had spawned again. The major problem is not that I am out of hitpoints but out of stamina.

When I got back to the city I bought the most expensive armour I could found, an armour of chaos (+12). I ate and slept and returned to the tomb again. This time to explore the northern part. After fighting through the starting skeletons once again I got to a dead end. But this end was guarded by some sort of magician. He attacked and I fought ferociously back at him and soon killed him. Another secret door could be found in his den that eventually led to the sewers. 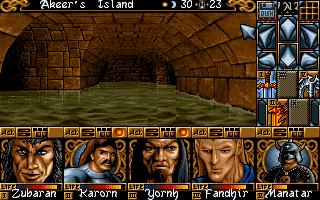 This was obviously a new sort of complex. At this time I had used more than half of my stamina and psychic points and therefore it was time for me to return to the city once again. Well there I bought yet another of the best armour to one of my warriors and replaced my fire sword (+12) with another magic sword (+15). I was also not satisfied with my archer. I have never used him in combat. Not since he defeated the goblin leader at the first island.Using bows and arrows in this game comes with a drawback that I don´t appreciate. When you press the attack button of the bow, the mouse pointer changes to an arrow that you manuall have to select a target fore. Menawhile, neither of your other party members could attack. It ain´t worth the extra time in my opinion.

So I wanted to replace him. What I will miss most is that he had advanced to level 14 and probably gained a lot of vitality points, but that couldn´t be helped if he was not adding more to my group.

I replaced him with a mage and also got rid of my existing priest for another priest. The new priest had four spells even though he was only half the level of my existing priest. Somehow you don´t always get new spells automatically when levelling up. So with two new members, my team spirit actually raised from around 19 to 33. I am not sure what effect that has on the game other than that a higer number is better.


Our first task was to return to the first island and meet the Golem for the third time. I found him at the same place, took the skull cube and he materialised in front of me. The combat begun and this time I attacked him with full strength and healed up my weakest fighter Manatar when he needed it. Soon the Golem perished and we rejoiced! Not that I know what I will do with the skullcube anyway. I was a bit interested - and worried - what happens to partymembers you dismiss so I figured I would see if they returned to their old tavern or was permanently removed from the game.

Unfortunately they where not to be found at the tavern where they where originally recruited, so that means one have to be careful when dismissing (or assassinating) party members. I have no idea when I will need some special character like a thief for example.

Since I did not have any good clues or hints of what to do I returned to the tomb and entered the sewers. At some places I found a strange creature behind bars but couldn´t interact with it in any way. 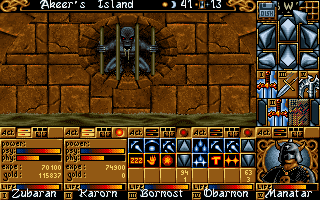 I eventually stepped out from the sewers into a small room with three weighing-plates. One of them had some gold on it and the other two was empty. Every one moved when being weighed down. Hmm. So what should I do with these ? And what do I want to happen ? Well, since this was my last room in the complex I had nowhere else to go so I hoped naturally that a wall would be removed or whatever to allow me to continue.
I don´t know which of these combinations it was but on one occassion I got back to the sewers and found the creatures gone from the bars, but they turned up in the water instead and attacked me! They where not overly hard and left nothing of value. I inspected the bars but could do nothing about them. This was one effect of playing around with the scales but I am not sure if it has been done correctly.


I returned back to the city again and this time I thought I would revisit the places I´ve already been at. That was a good move because at the temple I found out that the idol had been stolen. Not that I know what to do about it but it indicated that time or other events in the game had triggered this. 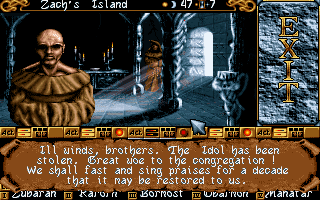 Back at the library I got hold of some receipt of potion names and what they do. The manual contains information about the ingredients needed but I haven´t found a cauldron to brew them in, yet. 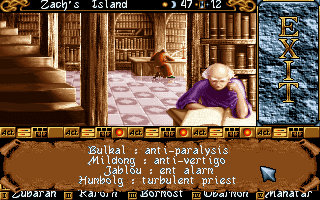 I searched the whole town after guards I´ve might have missed and found a guard giant or guard captain in the eastern part that I forgot about. I killed him and behind him was the entrance to the tavern Blue Velvet. When I entered I was surrounded with guards and taken prisoner.

I had no choice and was sent to prison - wherever that where - behind bars. There was a lock on the door but nothing in the cell and we kept all our equipment and weapons. I tried most things on the lock without success. There is a skill in the game called lock-picking. I thought I would need a thief in order to break free. This is one of the  moments in which you could get stuck forever if you save at the prison. I reloaded prior to entering the tavern but returned to recruit a thief just as a test. Well back in the prison I just stood there as dumb as before. How do I use the skill ? I could not break free in any way.

At this point I actually checked a walkthrough - and I was glad I did. In order to break free I would have to buy a certain bird from the zoo called thieving magpie or something like that. I reloaded, bought that bird and was back in prison again. I released the bird which flew away and returned shortly after with a key in its beak. What the hell!? Not the most logical and intuitive way of solving this problem. But it allowed me to continue.

Just a few steps outside my prison cell I discovered a cults' nest. They where conducting a sacrifice. I could do nothing except I could steal a key from one of the participants. I returned back from there only to return back to the cell areas. So how do I get out of there ?

When I passed the corridor the second time one of my party members said he felt a draught and I knew there where a hidden door somewhere. When I found it and stepped through I was out on the streets again. But this time I had to fight through a dozen guards to get out. I was lucky to have the strength left for that. Another spot in which you could get stuck if you don´t have an old save game. Anyway after breaking free I returned back to heal up and ponder what to do next.


Right now I lack any clear directions. I know there must be something more to the prisoner incident and the club blue velvet. Was it all just to allow me to get the key ? And what should I use that for ? I revisited the temple and the town hall (which now is closed at daytime...hmm) but that yielded nothing.


I decided to return to the first island to pay 10.000 gold for the magician who said something about an eagle showing the way. I had already bought all animals there is after my last experience in the prison so I already had an eagle with me. I paid him and then released my eagle who flew away. It turned up that the eagle discovered another island for me to visit. Perfect! Just what I needed. Somewhere else to go.


I went there quickly just to discover that it is a snowy mountain region with three separate harbours to dock at. However, I also noticed while being there that my health was drained every three seconds or so. 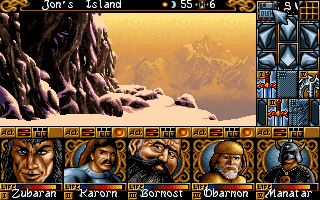 I suspect I have to protect myself from the cold in some way and then remembered a tavern where I heard rumours of what was needed for an expedition. Furs was mentioned there, so I returned back to the city once again. This time to prepare myself with some equipment before leaving for the new island again.

Before ending this session. Do I like the game ? Well, it certainly has its strength but the lack of a clear mission and the non-linearity, together with the rather challenging difficulties make it a mixed feeling. It is easy to get stuck in the game and the clues and hints are very few. But let me return to that when the time comes to judge this game.

Time to move on to explore the new island....