Prophecy of the Shadow - To the evil's den

Last time my morale went up because I got directed from the forbidden mages guild what to do. I got the key for the Great Library that is well hidden in the Great Forest. I entered and it was full of bookcases as well as some dire wolves here and there (nice place for their den!). 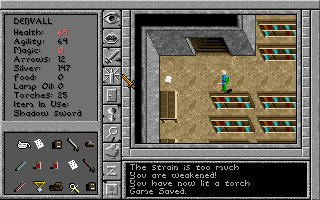 I found information about different beasts that roams the land like the Torloks and Gazers. The latter one is quite an advanced life form in itself and history tells of them quite a lot. When I came to a sort of piedestal I got struck by....a prophecy enlightenment! 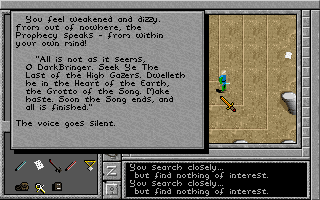 I was not much the wiser of the prophecy except that I should seek out the High Gazers presumably somewhere underground. It is not clear why. I thought the guild might help me to interpret it and so I went back to Silverdale only to be told a simple message: 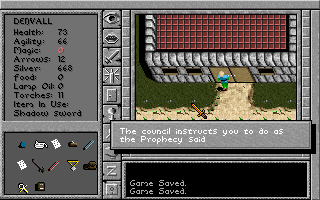 Ok! So that didn´t make me any wiser. I had explored the whole map as far as I know and could not move on in any place. This time I had to look for a hint online. The hint said it was time to use Larf´s Rod to teleport myself from the desert (called the Withering). I had forgot about all the teleporter stones. I travelled manually to all places and thought the teleporter stones only teleported me to known places. It turned out however, that by using the stones in the desert I was teleported to a small island not showned on the map.
The island housed another teleporter that I used and I found myself underground somewhere. 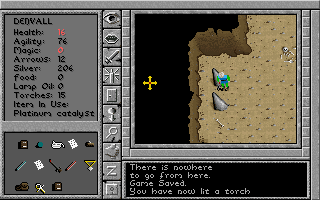 This was a huge complex filled with dangerous Gazers and a rat here and there. The Gazers are so dangerous that I always have to use the Shadow Sword, which stops me from using magic. That means that after every combat I have to save, rest to regain spellpoints, drop my sword, use healing spells, pick up and equip my shaodw sword and continue again. That is the process.
I stumbled upon some ancient ruins and found a magical lamp that....yepp you guessed it....means I can throw away my flint and torches. Extremely helpful. 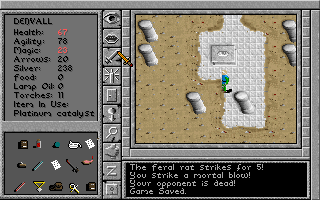 In the beginning I wondered about the use of rations. Now I know that you don´t need them. They help regain more hitpoints while resting but it is not worth the silver to carry them around since they are depleted fast.
After much explorations of the cave I stumbled upon a friendly Gazer who told me vital information. It took me at least two hours of more exploration of the cave because the first time I mistook the Gazer for an enemy and killed him. I had to reload. He didn´t talk to me and I had to go for a hint on this. It turned out I was actually carrying around a Gazer Dictionary - found in the library - that I had forgot about. By using it, he begun to speak.
It is the evil sorcerer Abraxus that is behind everything and the new ruler Cam Tethe (yes Cam, not Gam as I previously thought because of the hard to read font) is his puppet in the world. I was instructed by the Gazer to go to the hall of mages in order to find out more. 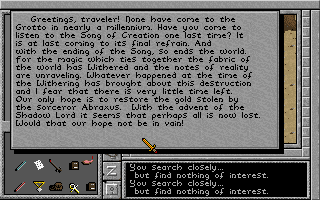 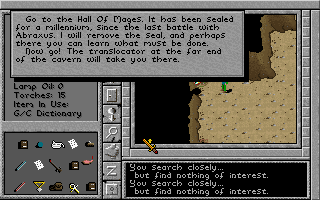 I used the teleporter in the cave and started my exploration of the hall of mages. Here I found a lot of important information for the background. The mages guild knew about the danger of Abraxus and had two ways of trying to defeat him. Either by forging a special weapon or by using very powerful magic to draw death itself to him. They choosed the latter one because the sword of power drained them of their magic.
So this is the sword I found sometime ago and was carrying around all the time. It was meant to destroy Abraxus himself but an unfortunate sideeffect was that it also prevented use of all magic, something which is quite a hinderance for a mage, don´t you think ? 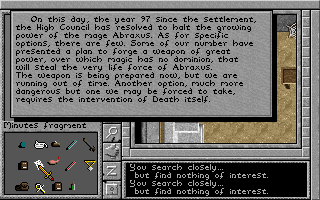 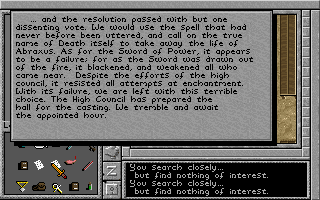 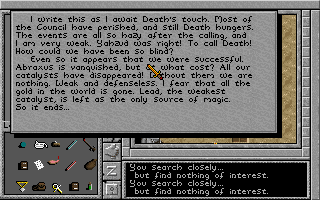 The hall of mages gave me valuable information but not a single hint on what to do next. I returned to the mainland and decided it was time to visit the witch again because I had now found all the four ingredients (the spider venom was found in the hall of mages). 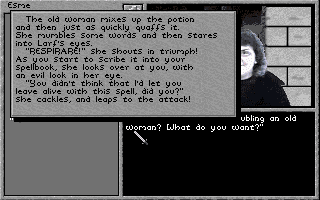 Arghh...she attacks me! But she was weak, after having equipped my shadow sword she could not withstand me. She left the spell Respirare to be written into my spellbook but I have no clue what I should do with it just yet.
I decided to return to the mages guild for more guidance and found them all dead, slaughtered by the mage hunters. Ok, so now I am alone again. At this time I had no clue how to continue so I checked for a hint saying I should check out Tethems keep near the capital Granite. I had already been there but couldn´t enter. 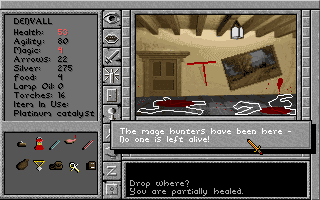 However, when trying to get into a backway I was told not to return until all mages where dead. Which they were right now but how would I convince them ? I showed my death warrants paper and was let in. 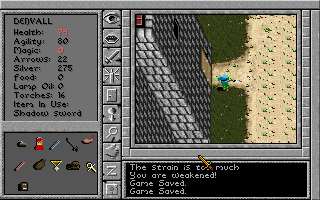 Finally I am inside the Keep where Cam Tethe resides. This will be importan. I seached the keep which was divided into several levels. I could talk to some loyal followers but most of the time I was attacked by the guards which by now was no major trouble since I could always rest and recuperate. 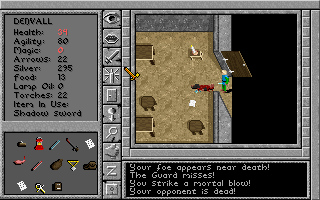 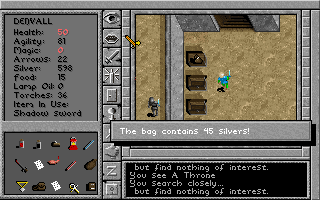 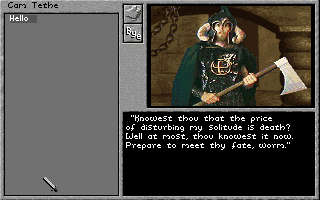 I found some keys that allowed me to open some closed doors. One key was given by a maiden who belonged to the resistance against the Cam Tethe. It allowed me access to his private quarters. Another key led down to the dungeons. In the end there was not much to do except plunder and search everything and find Tethe somewhere. I finally met him upstairs. He attacks with his Ebony Ax which does tremendous damage. I barely managed to hit him with my Shadow Sword. After being killed three times in a row I had to figure out a tactic to kill him. I entered the doors, met him. Made one or two swings then returned by the doors downstairs again. He was not following. By repeating this procedure - and heal in between - I defeated him after about 4-5 confrontations. 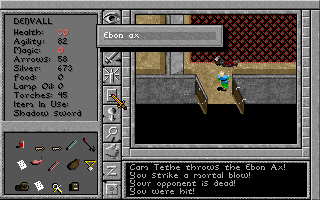 After his death I searched everything and found some sort of priest dress I could wear. My guess is that it allows me to enter the temple in the north disguised but I might be wrong. I also found the key that led to the prisoner section in the dungeons where I saved the princess. She was free at last. 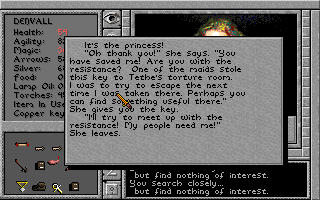 At some place a ladder went down to some caves below the dungeons. 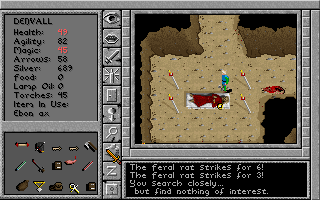 While searching them I stumbled upon an evil priest which I killed with the Ebon Axe from Tethe. He left an importan spellbook that gave me some more spells. Actually I never use spells in combat. It is to slow and clumsy but someone else might have use for them. 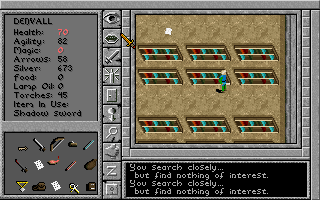 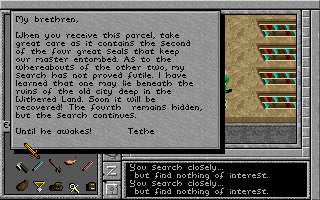 It takes no engineering brain to conclude that I will probably have to find these four scrolls. I hate looking for items with very little to go on. Especially if I have already been in the places mentioned like the Withering lands. Perhaps I have it in my bag of holdings already. Let´s hope so and continue.
I was finished with my business in the Keep. All guards where dead. Cam Tethe was dead and I had his axe and some dark priest robes. Now I left to visit the temple in the north.
Before I went there I took on my robes and tried the double doors. I was let in but they immediately discovered my false identity and attacked. It was too late for the however. Now I had access to the whole temple. 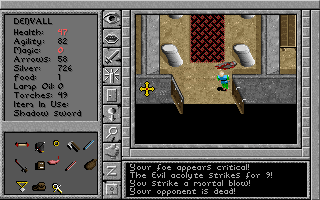 I begun my search. Rumours says there are a tomb where Abraxus lies. I think it could be beneath the temple. If this game is not hidden any huge unknown areas, the next post just might be the last one on this game...

Email ThisBlogThis!Share to TwitterShare to FacebookShare to Pinterest
Etiketter: Dosbox, Prophecy of the Shadow, walkthrough