Prophecy of the Shadow - Exploration of the world

Last time I had trouble defeating the mage hunter in the bandits hideout and so I had just turned my attention to the pit on the eastern part of the island. It could be found within some ruins. Rumours said it was in this area a gnome wizard where conducting necromantic experiments and zombies was said to threaten the village from time to time. Something I just had to check out....
At this time I was near my limit of 15 items in my inventory. That is a fixed number not affected by your characteristics and some items are obviously quest items so you need to carry around a lot of stuff for later use. When entering the pit I was welcomed into an underground laboratory where zombies greeted me with long fleshy fingers, eager to slit my throat.
Since I´ve recently switched my dirk to a dirk of sharpness I did stand a chance against them but exploring the area both filled my inventory and drained my health so I had to return to the village a few time to sell items and get some rest.
When I returned I found e laboratory and some sort of research facility. It gave me valuable information about the experiments conducted. 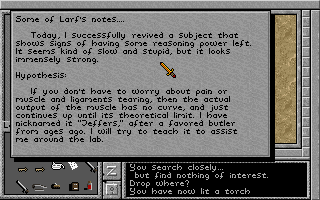 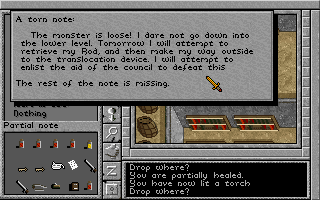 In the end I met Jeffrey, the gnome wizards butler, turned into a zombie. He was quite hard to defeat but after 5 attempts I got him down. The only thing of interest where the wizards rod. There where no sign of the wizard himself and no way to continue in the dungeons. I knew from the notes read that the rod should be used somewhere outside in a kind of ritual and I looked for places that looked important and tried the rod.

Meanwhile, I made another attempt to kill the mage hunter at the bandits hideout and this time I was successful. He left a letter indicating that the bandits where behind the murder of my master and it was signed by Tethe himself, which later turned out to be the new leader of this realm.
﻿
I took the note back to the sheriff and after I had cleared my name I revisited my masters friend at the fishermans house. Now that I was cleared he gave me a scroll to take to Silverdale on the mainland. It contained important information about a prophecy that it seemed now was about to come true.
At this time I didn´t know how to get to the mainland and I hadn´t found Robins (the bandit leader) treasure yet. I tried looking for it after instructions found in the thieves hidout but failed to locate it so I returned to look for special stones to use my rod on. I finally found two rocks and used the rod. It turned out that it was a teleporter. I was transported to a glade on the mainland and could continue my adventure over there.


I am not really sure yet what effect food has on your health or character. Regardless wether I carry food or not I can rest and heal. Perhaps I will recover more health if I have food ? I am not sure of this yet so I will have to observer this closely.
Magic is forbidden to practice and anyone who does run the risk of dragging attention from the mage hunters sent out by the new ruler.
While on the mainland I first stumbled into a village called Glade. Here is the first possibility of increasing my agility by training acrobatics. It costs 500 gold though and I decided to keep it for now and return later. 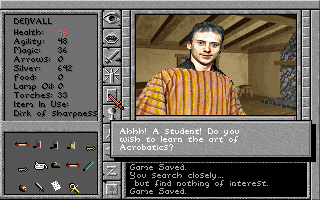 I talked to all inhabitants to gather more information about what has happened and was told to take the road to southeast to reach the town of Silverdale, where the guild was. When coming there the Guild was closed and by speaking to the villagers I learned that it had been closed down by Gam Tethe himself and that the members are scattered around in the land, hunted by the law. 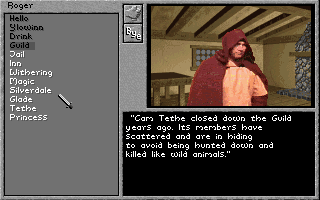 The story told to be was that when the princess was about to become 18 and was about to take over the throne,  she dissappeared and Gam Tethe appeared from nowhere and took over the throne. Noone knows where the princess is and many complains that Gam Tethe don´t do enough to track her down. I did not know where to go next and decided to explore the main island. While exploring I discovered an abandoned mine in the northeast and decided to search around for awhile. 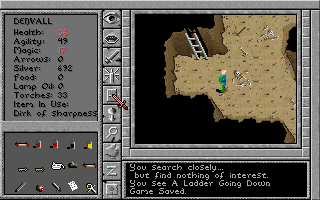 I found a few items and returned back to the mainland to look for a shop somewhere. My search took me south to the town of Jadre where I found the first shop. I sold my stuff and explored an area west of it that was a huge desert. Somewhere I found pits leading down to underground catacombs. I did find a few corpses but not much else. 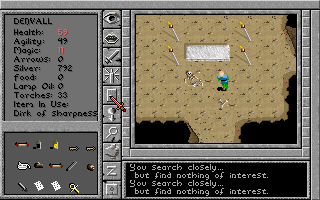 While running around for another hour or so without really knowing what to do next or how to continue on my  main quest, I did find a remot hut in the northeast where Garen lived. Garen was supposedly one of the members of the guild and had now gone to hiding. 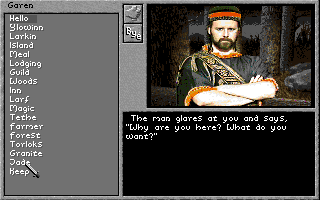 I showed him the scroll from my fathers friend. The prophecy and immediately Garen begun to speak: 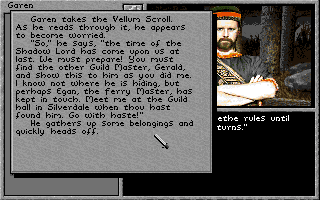 He told me to find the other guildmember, Gerald and perhaps the ferryman Egan would know where he was. I had yet to find the ferryman but at least I did get a little closer. There where a few ways on the map that I couldn´t pass due to strong opponents so I sold everything I could spare and used my last money to replace my dirk of sharpness to a greatsword. Now, I was ready to force my way through my enemies in search for the right people. I had heard rumours of a resistance building up against the tyrrany of Gam Tethe, but at the same time he did have many peasants at his side since he did much to win their support.
My exploration for the truth continued.....
Upplagd av Saintus kl. 9:29 PM