Prophecy of the Shadow - Back on track again...

I found the map that are included in the manual. Though I roughly knew where everything was by now it still helps me to figure out how big certain things are like the Great Forest.

I had missed the capital Granite on my way north (though I don´t understand how I could´ve missed it). Anyway there I discovered a few shops and an inn. The palace where located on an island that was not easily accessed. The guards outside attacks me on sight and it took me a few tries to defeat the first two of them, and that was only possible because I could take them on one at a time. But when I tried to walk over the bridge to the castle, another two guards attacks at once and I don´t stand a chance so I left this place for now.
I did, however, manage to locate the former guard captain Gulian, but he had not much to add to the mystery. 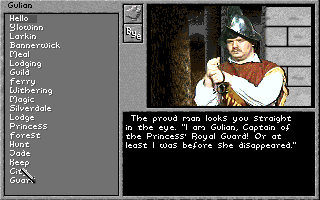 I returned to the southeast part where I knew a huge swamp where. When I got closer this time around I discovered I could walk on certain hexes that contained some type of weed. While trying out all places to step my foot on (and I did try for long), I finally managed to get to an island in the middle of the swamp. There was an house there and I entered. It was inhabited by an old Witch, Esme that I figured out would be very important since she was so hard to find.
She spoke about contacts with the gnome-wizard Larf and that he wanted to ressurrect dead bodies and was always interested how thing where on the other side. Then it struck me that the severed head I carried around might be his and showed it to the witch. Voila! She begun to speak.... 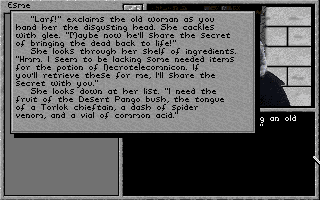 Arrrgh!, It turns out I need to find four different ingredients to create a potion of necrotelecomnicon. Not that I understand why I would need it. It seems like a hard task so I suspect it will be either very vital to the quest or something which will be very beneficial. After the visit to the witch´s hut, I tried to locate positions on the map where I could continue. The northeast and northwest part of the mainisland is blocket by difficult enemies, regardless of the great sword I carry. That is because they could throw fireballs at a distance. I have seen however that there is a shop in Jadar that sells what I believe is some sort of protection against it. 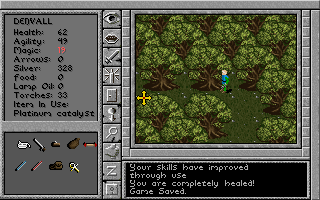 Meanwhile I ran around the Great Forest to find any entrance to the great library or the rumoured Torloks tribe but didn´t have much luck. My attention went back to the desert area in the southwest where I might have missed something. And so I did. I found a house but could not enter. It was probably deserted. While very throughly searching the desert, I found the desert pango. At least one of the four ingredients had been found. 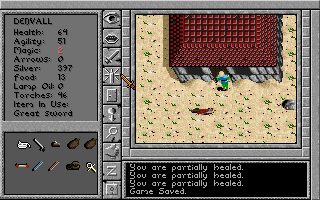 I don´t remember exactly where, but I found a special bag of holdings which - unsurprisingly - allows me to carry more items. It seems it holds quite a lot and because of that I decided to return to the crypts under the desert to pick up items I had to get rid of in order to keep more important items. They could always be sold and allow me to buy better things. 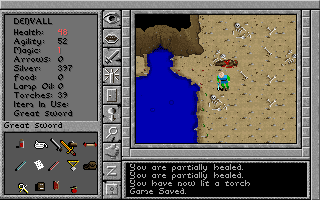 After returning from the desert I had still no clue where to go so I went back to the Great Forest to explore all
paths. Finally I found a path I´ve not been into. I was attacked by both Torloks and wolves and after fighting them methodically and healing and resting inbetween, I eventually entered their main camp. After some time I cleared it out and found their cave.... 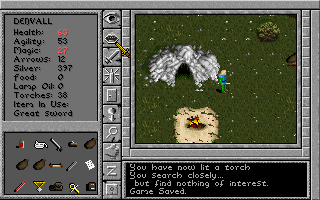 My investigation of the Torlok cave included a lot of fights. They mostly dropped pelts as items. They are not worth much but still, with the bag of holding, I can get some silver coins for them. I cleared out the whole area and met the Torlok Chieftain in the end. He was somewhat difficult to defeat but after a few attempts he was defeated and left a Torlok tongue. That is the second ingredient for the potion the witch could brew. Other than that I found nothing to take me further into the main quest.
I left the Torlok cave and explored what was left of the irregular paths that led me there and stumbled upon the famous Great Library. What a pity it was locked and I had no idea how to get in. 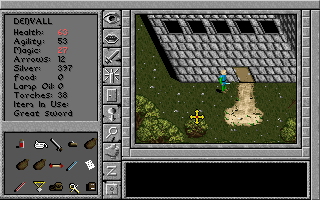 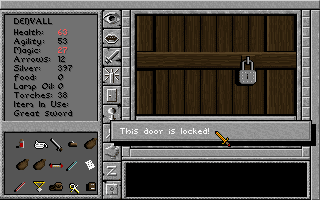 There was not much else to do so I took a note of the path to the library and went back outside the Great Forest. Now I was quite lost. I think I´ve talked to everyone and searched everywhere on the map. I made a new attempt to attack the Gazer in the north but to no avail. I had to take a little sneak peek in the walkthrough to get me only a hint of what to do and found out I´ve forgot to clear out the whole mine complex in the beginning. I was obviously on my way back to the town, stuffed with items to sell and forgot I was in the middle of its exploration. I went back and now I throughly searched the mines. I found a not talking about the Gnome Chieftain and his famous sword. Ah...I remember I did read that text the first time around but forgot all about it. Now I carefully searched the whole area and found the captain in his camp. I defeated him and he left a Shadow Sword. 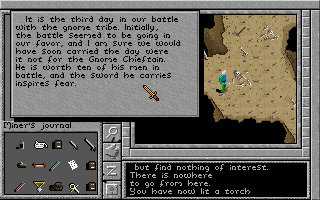 Still, no way to proceed with the main quest. But this let me try out to defeat the gazers in the north again. And with the Shadow Sword equipped I vanquished them. Not easily, but still. They allowed me to explore the northern part of the island. The sword itself was interesting. It turned out that while carrying the sword I was not able to cast any spells. So now I have to drop the sword, equip the platinum catalyst, cast my spells and then pick up the sword again. That is the only way to heal yourself quick enough.
The northern part of the island housed the town of Malice. It turned out to be inhabited by religous fantatics that talked about Abraxus, some sort of god that will come back to the world to punish all that are against him. His temple lies there but they don´t allow anyone not disguised as a priest. I had no way to get in and there where not much more to do there. 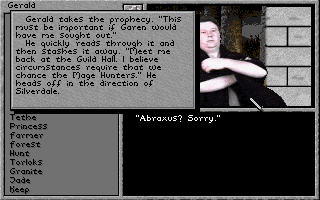 Yes! I finally located Gerald. He was hidden in a path south of Glade which I had not discovered yet. At last he give me instructions to go forward and meet them in the closed down Guild in Silverdale. 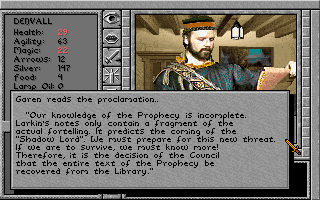 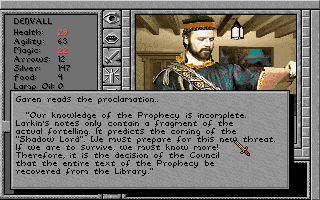 While inside the Guild, I learn that the shadow lord, the evil Abraxus is about to come loose. He surely have something to do with Tethe Gam, the new ruler. Now I was to find  more information in the Great Library. They want me to go there and gave me a key to enter. Finally I am about to proceed in the adventure....
Upplagd av Saintus kl. 10:25 AM

Email ThisBlogThis!Share to TwitterShare to FacebookShare to Pinterest
Etiketter: Dosbox, Prophecy of the Shadow