Dragon Wars - Quite a challenge

I´m another 5 hours or so into the game. Almost all of my group are now level 6. I have at least one new follower, Valar, a magician. I have been exploring the wilderness and the islands for the last hours and tried out different places that didn´t seem to be too hard.

I have visisted some Ruins and found some treasure there and also some Slave Estate where a master called Mog was living. Yes, it was deserted and ruined but I found both good equipment and also Mog himself in one of the rooms. Of course, he was not very friendly so I had to defend myself. Later after having defeated all foes I learned somewhere that Mog had left all inheritance of the place to me. Not that I know what that means.

I have had no grip on the mainstory so far. My focus is to explor and stay alive. I have no idea of my major goal. Despite being at level 6 and having gained a few - what I believe - magical weapons like the Firesword and Ruby dagger, I don´t notice any particular difference in using them in combat. I have had some more spells. Mostly damaging spells that affects groups and that makes it possible to defeat tougher groups of foes. But overall I have to say that the game is quite hard and forgiving. You step into fights - random or fixed - at about every 10 steps or so and with the kind of foes I meet I am drained after 1 or 2 battles and have to retreat to a magical pool to replenish my mana and heal up the group. It is quite tiresome since progress is getting slow.

I should admit I haven´t spent any skill points yet though except for one of my magicians, Wyrtha, who paid 10 points to get High Magic. Now my group have access to every magical school but very few spells in them. There are a few places here and there where you must use certain skills. Like the smugglers cove where you have to convince them by using pickpocket that you are one of them. They then offer you a ride to Necropolis. That was way too hard for me though. At other places you have to use buerecracy to get some sort of citizen papers to be able to get around and so on. I like the use of the skills but it also makes me cautious about spening my few level points until I know what I need.

I tried to increase my dexterity of two of my warriors with 4 points each (costing 8 level points) but I didn´t notice it any easier to hit or defend from foes. I don´t know what to do. I guess i have to put them into dexterity and/or strength but I will do some tests too see where they are doing the most use first.

I explored Lansk and the city of Phoebus as well. Both tough places. I have come to understand that the game is quite large with at least a one or two dozens of full 16x16 grid cities/places. This will take time. A lot of time. If I am not getting to grip with the mainstory soon it will be easy for me too get temptated by Shadows over Riva or Avadon the black fortress. 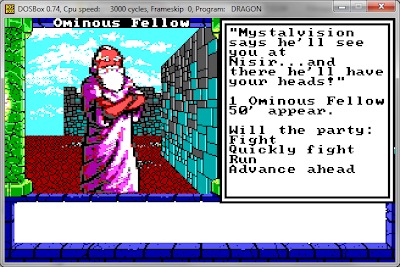