Since the last time things have progressed well in Dragon Wars. I did explored Purgatory to the fullest and even stumbled into the Thieves guild. They offered me 1.000 gold for defeating a huge man in the northeast part of town. I hade already done that, so the money went straight to my pocket. I headed to the black market from time to time to upgrade my weapons and armour. But I mostly focused on armour because there is no way to know how much damage a single weapon does. I know you could examine them and then see the strength requirement to use it but I am not sure how and if that affect the damage done.

After a while I was finished in Purgatory as far as I knew and wondered what was the best way to leave the city. I had a few options it seemed. Either I would sell myself as slaves, or I would combat in the Arena. Or I could find the secret door in the wall. But I opted for the morgue in the southeast part of the city. There were piles of bodies there near the wall and they where thrown over in sacks. First I used the climb skill but then I realised it could be the Hide skill and the group hided amongst the dead bodies soon to be throwned over the wall in sacks. We succeeded this way and swam to the shore. From there the adventure would really start. But where would we go ? 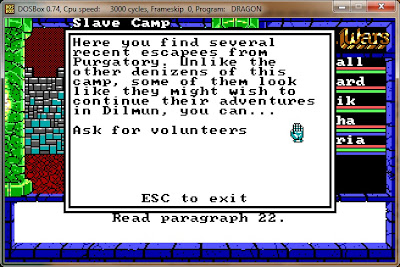 We found a slave camp and entered. They were friendly and we searched around and found a hidden chest with valuable equipment and some background information and also a new recruit, Louise who has skills like pick pocket. The slave camp also gave away all low magic spells from an insance character.

When we left the slave camp we were out in the wilderness. We could either cross a bridge, return back to Purgatory or revisit the slave camp or some other small areas. I decided that we would go back to Purgatory to try out the underworld entrance. We made our offering to the godess before we descended. Down there the opposision was much stronger so we avoided fights unless they seem to easy ones. We were up to level 3 now in the group. The underworld is quite a boring place but it did have some stairs that led upwards to ruins, a dwarven stronghold, a magic forest or to Lansk city amongst others (I am not sure I´ve found every exit yet).

In the south I was greeted by theese fairy spirits who sucked out life force from me before allowing me to continue forward. I have not examined the place behind this yet. 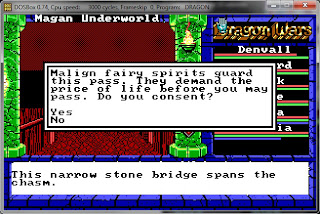 You do only have one save slot and so I have to constantly backup the Dragon Wars directory at certain points or areas in case I get stuck. The first thing I do when entering a new area is to check that I can find the exit and leave it. You do not regenerate hitpoints or magic points naturally or by time. Hitpoints demands the bandage skill or heal spell and power points are only restored from magical pools (which are rare and far between) or by using something called a Dragon Stone. They are quite expensive though and the few I´ve found I have been kept safe so far.
Upplagd av Saintus kl. 10:07 AM