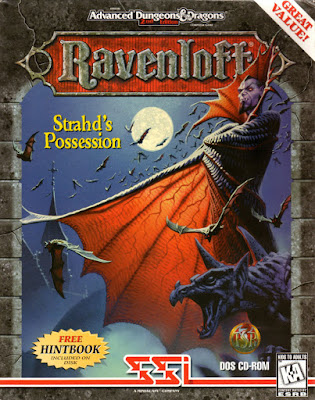 GOG recently had a sale of old SSI games and I couldn´t resist buying a dozen old titles. Among them was Ravenloft: Strahds Possession. A game from 1994 which I had never played. At that time I still had my Amiga 1200 and so I missed out these great RPG titles that where released for the PC platform in the beginning of the 1990s.

Since it was a long time I revisited a real old-school RPG I thought this could be the moment for a comeback. I have no experience of the Ravenloft world at all. But it seems based on the AD&D rules of which I am very familiar with.

The game begins with an introduction of a king that is robbed of an amulet and me and a companion are sent after the fleeing thief. But before that I have to create the two characters which is played out by a gypsie giving me cards with choices of gender, race and class. I can then reroll my stats until I am satisfied but to my astonishment I could also edit them to set any value I like. That seems very strange and it feels strange to spend time re-rolling (one of the traits we old gamers have) when I just could cheat. I will try to re-roll the best results I could get and I chooses a warrior and a priest. 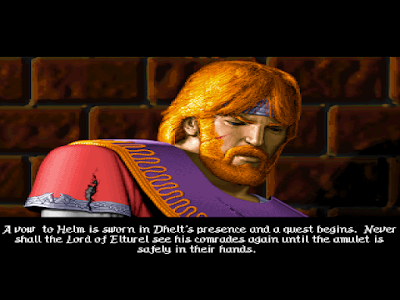 I created a human figher and a human priest. I rerolled for 10 minutes until I got satisfied with the results. It turns out you start at level 6 already. That was a dissappointment because this is the first in the Ravenloft series and it will take them to raise a level.

Now, we started just outside a wood and in the far distance we could see the thief. First I checked that all my weapons and armours were properly weared and the we run to the thief and a fight begun which we won quite easily. He dropped a few items, amongst them the amulet but also a parchment. 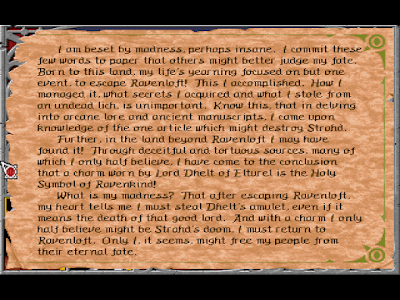 The parchment suggested that the amulet was vital in order to defeat the vampire Strahd that seems to live in the castle Ravenloft. Just after reading this a mist formed around us and we were suddenly brought to another part of the world. There we could never leave the boundaries of the mist so we had to explore the way forward and soon came to small walled compound. In there we found another document but also a ladder leading down to an underground cellar. It was empy of denizens and we found a few healing potions and an armour. I never found any hidden passages so we had to return above again and leave this walled place. It was then we where attacked by worgs.

Fights are done in realtime and I have to click on the weapons as quickly as they regain their coolness period. It was not too hard to kill a single worg but this place was full of them and also of goblinlike creatures which was very hard to kill. I had to reload at least once until switched tactic and decided to run through all encounters. That led us to some remain that we plundered of a few healing potions before coming to a walled maze of plants. Here I was overtaken by three brigands which I only hardly defeated before saving the game once again.


The forested area I was in was called a road according to the sign. I explored this road southward and after having fighted some other bats, brigands and worgs - and rested in between. I came to some sort of fort or castle with double doors impossible to open. I had to explore the surroundings which was a forest but nothing of interst laid there. I returned to explore north and was ambushed by three brigands. After a tough fight where I was about to die the survivor yielded to me. 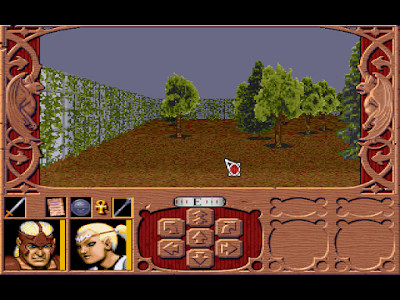 I let him go because i had so little health left and he told me how to get to their camp. When he was gone I continued my exploration northward. I had still to find any items. I have the same weapons and gold as in the start so it seems it will be hard to get items in this game. The creatures does not give you any loot, neither can you see their health bars when fightning. 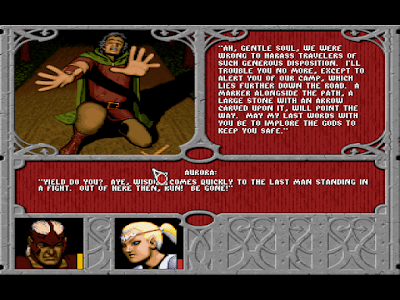 After awhile I found a man who told med that Strahd is a good leader and that he is no king. He also sells a potion with which I could pass the inpenetrable mists at the borders. He would stay at a village farther north if I ever got the golds required. At least I had a goal. To reach the village and find out more. On my way there I walked upon a woman who clearly was only interested in gold or how to get it. I thought she was a thief first and after some conversation I recruited her to my group so we are three now. It turned out she was a thief/warrior/mage. Any help at this stage is good help. 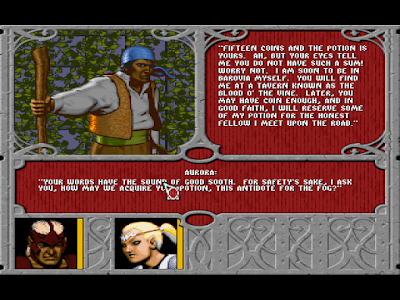 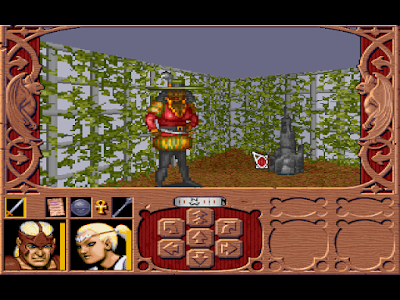 I reached the village and it turned out to bee quite large. I begun to explore house by house since  I didn´t find any visible inhabitants. I could enter any building but I never met anyone who wanted to speka to me. Meanwhile this background music is playing its horror themes in my earphones. The quality is what could be expected from this time but at least there are digitized voices of the NPC:s which is a nice touch. 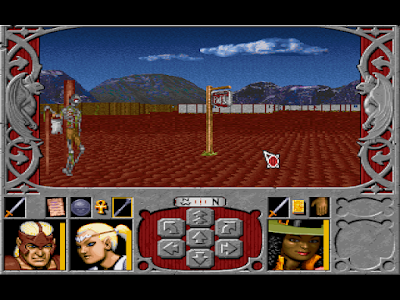 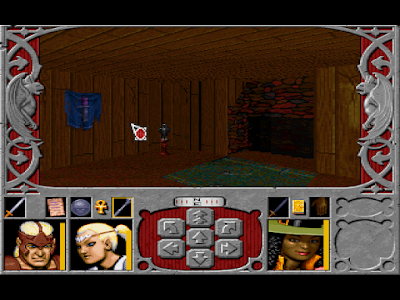 I don´t know what to make of this game so far. I cannot say I am overwhelmed by the game, its graphics or interface (which is a bit clumsy to say the least). But I have read only good reviews of this game so I will give it a chance. What I do like is that you r characters are commenting on things seen or happening which adds to the story and atmosphere. I have no sense of progressiong right now. Since I am already at level 6 it feels quite unneccessary to combat these random encounters since I would need so much experience points to gain a level and they never carry any loot anyway.

Let´s see how this game evolved during the next hours....