With this post I feel things are coming together with the game. Its true self are slowly showned and the more I see the more I like it. It sure have its irksome interface but I am slowly getting used to it and it works better and better.


I never gave up the Caverns west of Barovia. I just had to methodically write notes on the map and to find all teleporters and hidden doors. The graphics is so pixelated in large screen that it is hard to see what things really are. To find a hidden button is very hard and easy to miss. To find a secret passage is even harder. I have now started to strafe myself against the walls and have found several hidden doors that way. This cavern requires you to find four jade keys to open four special doors in order to proceed. I got stuck from time to time and to get myself going again I had to get some hints from an online map that pointed out something I had forgotten or missed totally. Like a secret door. That was the only way for me to proceed. It also turns out that I had to go back and recruit the priest in the entrance of the caves because she is the only one to open one of the last doors in this cavern. 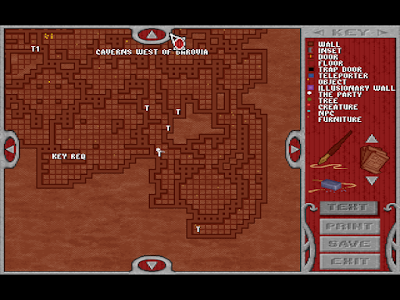 My new system of just clicking on the enemies instead of my characters weapons have made combat much easier. The cavern was inhabited by skeletons and the occasional bone golem. Those golems are pretty tough but not with some magic missiles. I find that magic missiles feels quite overpowered. Most of the tougher enemies in the game could be taken out with only one missile if you´re lucky and at most two or three hits.

The cave hid some interesting stuff like some wands and a few magical weapons. At that time I didn´t have any of my mages with me but a low level spel is identify which I cast on every weapon/armour I find to know wether they are magical or now. If not, I will just drop them. There are also quite many potions littered around in the game and I have never used a single one of them because healing in this game is pretty easy. You could rest almost everywhere as long as you are not in vicinity of an enemy. That replenishes all your spells and also heals the party. It is fortunate this part of the game is pretty liberal since there are other areas that are hard with it.

One major item which is vital in the caves is a key that leads to the church northeast of the village. 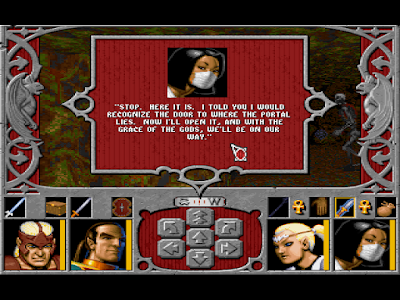 Anyway, after some tough searching I finally came to the last door and then the priestess awakened and helped me to open it. Unfortunately those last stages of the game was filled with tough monsters. Just when we had found the portal which we believed was the only way to exit this land and entered it we found that we where teleported to the town again. The warrior that had joined us had disappeared and left us and we felt cheated. The priestess had fulfilled her mission too and abandoned us and we stood there with a huge pile of items they left behind. The only way to pick them up was to quickly recruit two other NPC:s. I returned back to the wilderness just before the caves and picked up the strange mage. Then we returned to the city and I picked up my old companion mage at the tavern. We then got all the equipment and I choosed a base for us. An empty house we used as a stockpile for all of the items we didn´t need for the time being. After this process we continued to explore the village. 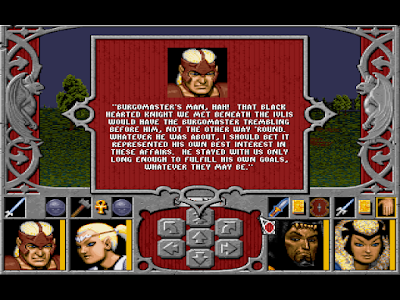 I found at least one other NPC, a female paladin but since my main character already was one I was content with my party as it was and we left the village to explore the northern parts. The grounds outside the church was filled with undead, mostly zombielike creatures that was easily disposed of. We entered the church with the key we found in the caves and soon discovered a paralysed priest in the main hall in front of an altar and a black mirror where it seemed his soul was trapped in. We spoke to him to learn from his terrible faith and continued to explore these halls. They consisted of two large levels filled with undead, traps and secret passages. 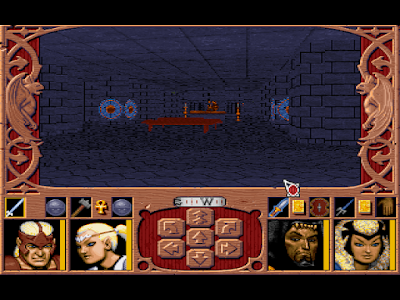 It took me a few hours to clean out the two levels. Early on I found a book that contained some sort of ritual where I needed four very specific items. I also found a book which I completed by finding missing pages that formed an important message. Together - I suspected - they hold the key to free the high priest in the mirror but those pieces were hard to find. Especially I had trouble open two doors opposide each other with no visible button, hidden door or secret passage nearby. I had to cheat on this one but the solution was not found because this wasn´t particular hard. I found out in a let´s play that the lever for these doors where behind a pillar in the neighbouring room which I had totally missed. The temple was filled with new potions, chests (which act as containers) and some weapons. now I had the mages with me and could both identify all items and also scribe every scroll we found down to the spellbook. One favourite item I found was a magical throwing daggar that returns to the throwers hand. This made it possible to fight with one of my mages to the right because they can only use ranged weapons.

I also had much help of my elven mage that has an innate ability to find secret doors. It helped out a lot in this place. 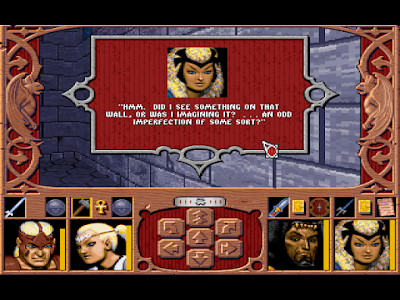 Eventually we completed the levels and returned to the trapped priest and read the ritual to free him.

The next part was to explore the area east of the church grounds which was the cemetary. This place increased the difficulty a lot because it was filled with close to 100 undead of which a dozen vampires with draining level abilities. To fight them became my hardest part. Level draining is perhaps the worst thing in any RPG because every level lost could easily translates to several hours of gameplay in grinding. So naturally I saved before trying to confront any vampire and then immediately checked my level status after a fight before saving again.

This took time but even here the tactics is not to get in melee contact. Just shoot magic missiles, fireballs or ice storms and the vampires are quickly gone. It took some hours to clear the whole place including searching into every house in the cemetary. I found a locked grave of the person that murdered the jeweller in the village. I couldn´t open the door but by returning to the village and NOW accept the quest of possession I got the key from the jeweller and could open this tomb. And there he was, an undead lord that I did fight by hurling a few magic missiles at him and then it was over. By returning to the village afterwards I completed this quest and was given a few magical items. 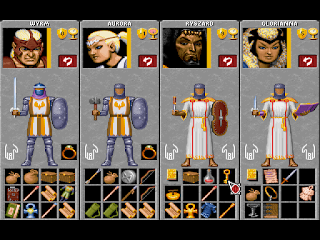 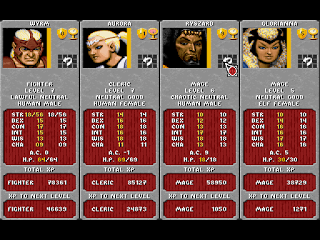 After having reequipped ourselves we where ready to explore the last part of the cemetary...


So my reflections now is that the music had become a little better. I love the sudden screams, footsteps and echos in the environment and the music even picked up a little in the church. Fighting is relatively easy when not fighting level draining creatures. I feel that offensive spells are overpowered compared to similar AD&D games.

More about my adventures in the cemetary in my next post...