According to Steam I have played for 83 hours. That is not entirely true if the time counts when the game has been paused for long periods tough, but it give a hint of the size of this game.

I have reached what I believe to be the last part of the game. The problem is that it is just damned hard. Even when switching difficulty down to casual I am not able to defeat one of the major subcombats before the final one (don´t wan´t to spoil anything here). So I give up. I don´t have the time and patience to try to complete this when other games are knocking on my door. I do have a good grip of the game tough to make a review.

This game was much larger than anticipated. It has been a solid experience. The game has a good story and world going for it and the dialogues are well over average for this type of game, only superceded by Biowares and Bethesda games.

I´ve already told you about how the system works in previous posts so lets get down to business and see how it fares in each category. 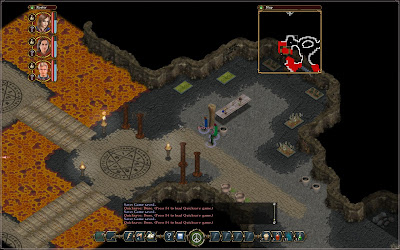 The gameworld is well defined with several countries and faunas with their own cultures and motivations. The Pact, Avadon and the borderlands are interesting places and the game is filled with references to them all the time. The story of the game is quite good. A rebellion is forming and a former highplaces Avadon Hand has became a traitor and must be tracked down. Everything is twinned together. The aging Avadon commander Redbeard tries to keep the alliance together but is tired and dizzy. Still he or his subordinates send you out on different missions which is important to restore the balance and stop the rebellion.

I would say these parts are one of Blackspider webs strongest parts.

You have access to several shops around the world with different prices and inventories. In the beginning you lack gold (as always) and there is much you would like to buy in the shops but only after a third into the game I felt the shops never contained anything really powerful when it comes to weapons or armours. You will always find better equipment than what the shops are offering which means that all your gold could be spent on buying different kind of potions (health, speed, restoration etc) and scarabs (scarabs give permanent effects as long as you wear them in special character slots).

The variety of weapons and armours are also not very good with just a few different kind of wands, one-handed and two-handed weapons.

So I am disappointed because there are very few good items out there and the difference between them is slight. Still, lockpicks and potions cost quite much and you never really get rich. I think I had at the most 9.000 crowns in the game and a potion costs around 200. You need them to survive the harder and longer fights. For a game this modern and with all the experience back in the trilogy I would have expected more.

This is one of the games stronger points. There are a lot of NPC:s in the game. Both those that are part of the main missions and sidequests but also the ordinary people and shopkeepers. The dialogues are very well written most of the time and keep up the interest without wasting any valuable time with nonsense texts. Characters, their appearance as well as environments are well described.

The interactions of the game consists of pushing the occasional button or lever to open a secret passage or door but overall it is not much. You will find chests and containers and the world is filled with different kinds of tools and junk. Most of it is worthless though.

The game has no specific magic mechanics. It works just like skills for other classes so there is no mana. You will drain your vitality points just like when using skills. The only difference is that you usually equip your mages with wizards staffs since they are ranged weapons.

So in total I can´t say there is a separate magic system in the game. The mage classes do have their own skill trees though and these are quite varied between the classes. The shaman can summon creatures for example but I found even the most powerful ones to be quite weak. The other magic classes might do more direct damage instead but never do you feel enough powerful.

My favourite spells was mass confusion and mass haste throughout the game. Most of my area effect spells was pretty weak. 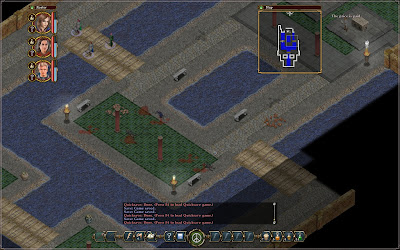 At the start you can choose among the different classes that exists for your main character. You don´t have to feel you will miss something because you will get followers in each category but in certain places in the game you will be playing alone and then it can be more or less hard depending on the class you have chosen.

When you increase in level you will get a randomly selected increase in an attribute (Strength, Intelligence, Dexterity, Endurance) and will get one point to freely increase. Then you get two skill points to distribute in the skill tree. Skills requires two points to aquire and one to level up. They also get more and more powerful the more skillpoints you invest and consists of part upgrades so you get a special feature at level 3 and level 6 in each skill. You also get a bonus skillpoint in a treebransch every 5 levels or so. This system works very well and I even found one person whom you could retrain your characters with.

To increase in level is really a pleasure. This part of the game works pretty well.

Maps are irregular. At least underground so you will never be sure of how large a place is. The design and level layout are generally quite good with underground rivers, lava streams and tunnels. The outdoor areas spans forests, desert like landscapes and mountains. It feel like a thought is behind it all.

At least there is a manual for the game (these days you couldn´t be sure of anything). It explains the game mechanics in the end part which is very good but I never noticed it until writing this.

The graphics in the game is quite simple, yet functional and easy to grasp. Even though there are a lot of garbage littering around which you could pick up but never have any reason too. The interface is also quite nice and easy to understand. You have the usual quickslots, garbage collector area and can switch between the characters easily when you swap items or sell/buy things in a shop.

The sound of the game is perhaps its weakest part. There are only some ambient sounds and never any melodies played in the game except at the start menu. The soundeffects are ok but everything sound just like the Black Fortress sounded which was released a few years earlier.

No matter what the CRPG summary value gets, the gameplay value is the single most important factor and this game gets a solid four. The story is good and engaging as well as the environmental descriptions and most of the NPC:s you meet are portrayed in a good way. Unfortunately I found I could never play for more than two hours at a time because of the constant fights everywhere which gets tiresome. If the designer would choose to add more tactics available during tactical combat like flanking, backstabbing, taking cover etc it would be much more interesting. For example, I never see any enemy spellcaster run out of vitality points which is a shame. They could bombard you forever. Also it would be nice to see sometimes in a game a wounded creature that actually gets its combat performance reduced.

I would also like to see a better use of the money gained. There where not enough good equipment to loot or buy and the later combats became harder and harder. Credit to the developer for actually making some combats require you to think because not in all of them you can just slaugher the enemies without first solving some things like finding a way to harm the leader by breaking a protective barrier for example.

The game is well worth its money and can you get it on sale at Steam or GoG it comes highly recommended.