If there is one dungeon crawler that has stuck into my memory from the Amiga golden ages, it is a game called Black Crypt. It was developed by Raven Software. A pure Amiga only company and this was their first game. The benefit of developing for the Amiga first made it possible to really use the hardware capabilities of the machine. And it shows in this game. It uses the Amigas Extra-Half-Brite (EHB) mode that allows 64 colors simultaneously on the screen at once. 32 unique colors and 32 colors half the brightness of the first. The game had splendid graphics, was fast and full of special effects. It is a true Dungeon Master clone just like Crystal Dragon was but this is game is technically superior.

I played through the whole game in 1992 during a few weeks or months when it was released but have no detailed memories at all from the game. Actually I don´t know how I did complete the game at all until I for my revisit here saw the manual for the game and sees that it contains all the maps with locations of items and buttons properly displayed.

I love the listing of features that a game of that time had. Black Crypt boasts of:


I have found the game with a setup that uses a harddrive in WinUae so the loading times of the game will be very quick. I have no intention of completing this huge game. This is only a short dive down to one of the finest dungeon crawlers from the Amiga time. The background is so cliché:

Estoroth Paingiver, a powerful cleric was banished from your country of Astera for unspeakable acts. One year later he returned with an army of demons and other undead creatures to beat Astera into submission. This time, four guilds united and four men managed to banish Estoroth to another dimension.But now it seems to be slowly opening so four new champions must venture down and retrieve four magical weapons and seal him away forever.

I clearly remember the title screens music for the game. If it´s one thing that doesn´t grow old so fast when revisiting Amiga games, it is the good quality sound. 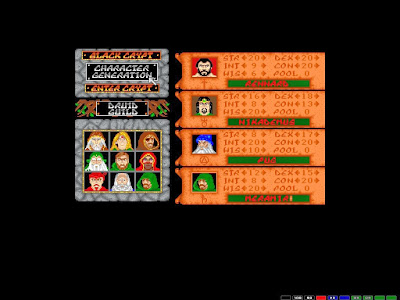 You start the game with four adventurers and your only options is to allocate attribute points to them. You are stuck with four separate classes. Warrior, Priest, Druid and Mage. You can select their portrait but that is about all. The attributes are strength, wisdom,  intelligence, dexterity and constitution. Even though the manual is easy to read it says nothing about how these attributes affects the gameplay. That´s unfortunate but nothing to do about.

You start the game in the first dungeon. It takes a while to get used to the controls and interface. I had to remap the keys in WinUae to be able to play on the keyboard in a convenient way. The game uses some - in my view - illogical way to attack and access a character sheet. I am yet not used to it. You have three bars. Hitpoints, water and food and the last two gradually degrades pretty quickly over time and especially so when you are resting to regain hitpoint or memorize spells. 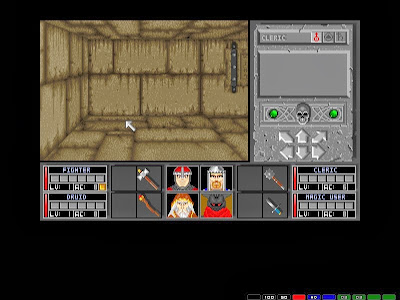 The first two levels is actually pretty hard. Not because of tough combats but because of food draining and quite a number of buttons to find, effects to look for, secret doors to discover etc. All this takes time and you can easily run out of food before you have solved it and then you will be dead. You are totally dependant on your wizards spell "Wizards eye" that gives you an automap but it does not update automatically when things changes on the map like in Crystal Dragon. If you press a button and hear a grinding or sliding noise, you have no idea where this action might have taken place in the whole level. If you are lucky it is very near but otherwise you have to revisit the whole level in search of something different.


Raising in levels occurs suddenly when you´ve got enough XP from fights. Your hitpoints is increased by a random number that could vary quite a lot. I haven´t seen the attributes being affected yet. Spells are not gained by level but by aquiring spellbooks. Certain spells will be more powerful the higher level you have though. 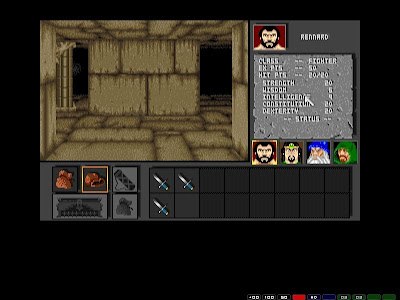 Anyway, the goal in the start will be clear pretty quick. Just down below at level 2, easily within reach of where you start you will come across a huge two headed ogre. He is impossible to kill but some scrolls I found indicate that he could be defeated using the ogreblade. On the other hand, a scroll warned me of using the ogreblade as it would slowly drain my life force away. In order to get past the Ogre I had to look for the ogresword. It took me quite some time amongst teleporters and magical walls. The last ones had to be dispelled by finding a dispel scroll. You also have to travel up and down between the first and second level in order to finally get the ogresword. When you have killed the ogre a previously closed door will allow you access to an area filled with items and stairs leading down to level 3.

After getting down to level 3 I read some scrolls that told me of unseen enemies and that the only way to avoid being attacked was to empty all hands of weapons. Another scroll also said not to tackle the unseen enemies until I had found an item that makes them visible. I opted to search for that item first which quickly led me down to level 4.

This level is pretty hard. There are green roofstalkers that takes a lot of hits to kill but that poisons you on attack. Since I don´t have any cure poision spell yet and scrolls are hard to come by this required almost ten reloads before I was satisfied. At the same time you are attacked by a quickly appearing grey gremlin thief that stoles an item from your hands and the dissappears. He is very hard to kill and if you are unlucky he grabs your best weapon.

Fortunately when he is eventually killed he drops all stolen weapons. But he is not alone on this level. They do appear here and there and you cannot chase them because they decide when they will appear and disappear (usually after one hit).

The level also consists of several locked doors that had to be opened in a certain order by small puzzles for each one like pulling a lever that opens up a passage with pressure plates and a locked door that eventually gets you another key and so on.

I got stuck a few times and had to check the maps in the manual. I hate that but I had no choice. If this will be repeating itself too often I will rather quit playing than having to cheat but I suppose there was a reason to include them in the manual at first. 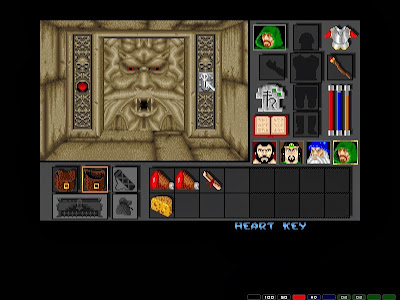 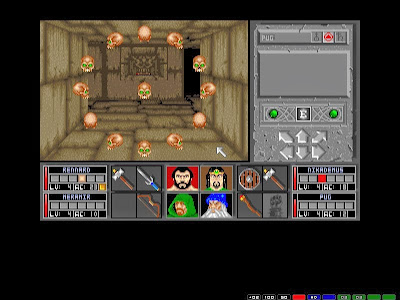 Everything runs smooth and the graphics is clean and well done. Monster look great and even though there are no music at all during gameplay there are some pretty good sound effects. You do notice that there are more colors than usual in an Amiga game.

The automap is excellent, although I would have preferred more details such as indicating where you have found buttons or levers. Now I must remember those places manually and since there are quite a lot it is easily forgotten. My tactics in games like these are always NOT to press them when I first found them. Only when I have mapped the whole level and got stuck. In that way I will more easily discover where any changes takes place. 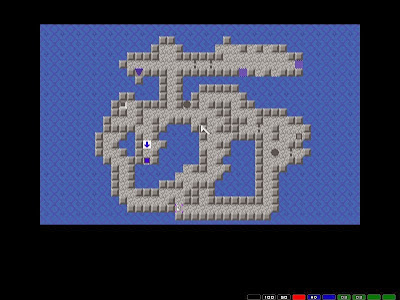 I have already found quite a lot of items which has given me better melee weapons and armours. I have also found a crown of detection which is said to detect traps and a ring of location that automatically casts wizards eye i.e. giving me the automap for free. But it seems that effect is not permanent since after resting it never came back.

You can see the damage dealt from each weapon in combat so after some fights I hope I will be able to determine which weapon are the better one. I have just found the hopeblade and replaced the ogreblade with it, in case the ogreblade actually carries some sort of slow life draining ability. Combat is executed exactly as expected with stepping (dancing) around your enemies to make swings or take a step forward-swing-backward and let the enemy come to you. They don´t seem to travel past door gates yet so that is a barrier you could use to your advantage.


I have just reached a place at level four where it seems I have to leave four different bags with water filled from different fountains. Since I have found only a few I suppose I have to travel back to level 1 to use the fountains up there and then get down. At least now I have got the create food spell which will make it much harder to starve. I am still dependent on water though.

The game have many different spells but I am not yet comfortable with how they are memorized. I have no idea when the time has passed so that I could cast the spell a second time. I do like that I don´t have to mix any runes like in DM or learn cryptic names like in Dark hearts of Uukrul or the Bard´s Tale series. It also took me a few hours to get used to clicking on the portraits in order to attack and right clicking on the weapons to access the inventory (it should have been just the opposite).

I have completed level four and returned to level three and prepared myself to take on the invisible creatures since I have got the mask of truesight. After having killed the first creature that turned visible it seems my characters cannot hit at all those creatures anymore. My hitchance seems to have dropped to a few percent at best. With those odds it is impossible for me to continue. I believe something is wrong. Therefore I have decided to not continue for now.