Legend of Faerghail - Preparing for the end

My group of six had searched the dragon temple, ploughed through the dwarven mines, escaped the corridors of the elven pyramid and not the least walked the dead halls of the former Sagacita temple. All in search of information about the new evil that stalks the land.

During our search we have found some very important information about what to do but very little background information. We learned that:

The castle turned out to be one of my favourite places in the game so far. Perhaps it is the atmosphere with echoing steps and thunder and lightning flashing on the screen. The inhabitants is represented with everything you could wish for in a horrorful way like skeletons, zombies, werewolves, vampires, spiders, rats, executioners and a lot of other dangerous entities like the Arag-Dai, the stronger cousin of orcs.

When entering the castle you have no way of returning back until you have found the door key much later on.  Fortunately you will never run out of rations or abilities to rest your group. At least I haven´t ever been near. But I sure did save before entering in case that I could not find the key or get stuck somewhere. At the first level I found a creeper willing to depart some secret for me that would get handy later on.


From the base level you will find several stairs leading up or down. There are two basement levels and up to four levels above you, most of them very small but important. At the basement you will eventually find the hammer of the gods if you succeed in finding a T-junction and pressing the buttons on the wall to the north and west. That will remove the forcefields that stops you from getting to a chest which holds the hammer of the gods. It is a terrific weapon but I am not sure of its full use but suspect I should use it in the end.

Before starting on Legend of Faerghail I said the levels lack darkness squares, compass disorientations and pitfalls etc but in this complex they are all there. But only at a few places and it will never be hard or frustrating to map the place. I also think the monsters have the capabilities for all the special attacks found in the game. I have been blinded, weakened, drained of experience and paralysed. Neither of them was I capable of restoring without proper spells.

The upper levels is what contains the important stuff. The first level holds the lord of the castle. He won´t attack you so you have to use the mithril ball to trap him. 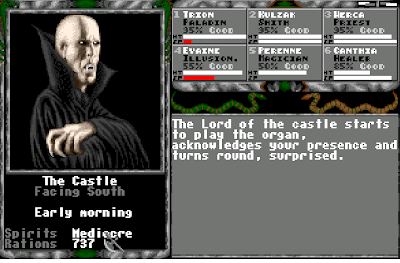 When trapped you could use him to gain access into certain areas, both to get they key to exit the castle but also to find a very powerful sword called blade of power. There are some problems you have to solve at certain places like sand a slippery corridor in order to get through, open the large windows with a crank-handle to let in daylight to heal your party etc. I did found a golden key I never understood where to use. As soon as I got the corona I left the castle. I had no more areas to explore. 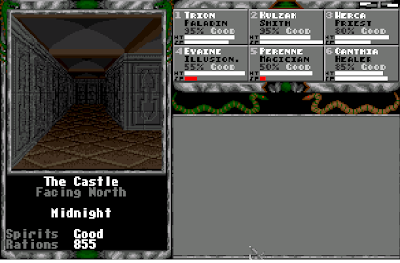 I was sure that when leaving for the town and inn again all of my party members would rise at least one level but I was disappointed that it wasn´t the case. I did improve in half of them but the ones now at level 7 requires a lot of XP to improve. My least developed character is still at level 5. My magician Perenne did however get new group targeting spells like lightning bolt. I cannot wait to try it out. 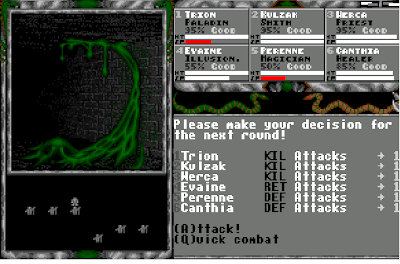 My next task will be to return back to the mines where the final solution lies. I am not totally sure yet how to reach the deeper parts except I will try to enter at night. My next post could possibly be my last on this game. I do feel however that my party is not experienced enough. I think I was far more powerful when I played this game the first time around but then again, I did rush through every place several times since I couldn´t solve all riddles or challenges at my first try.