Legend of Faerghail - Monastery of Sagacita

I am finally back to continue my quest in Legend of Faerghail. Real world interferance is always a threat to my gaming time and as if that wasn´t enough fate wanted me to fail my playthrough of the game by corrupting two savegame discs.

Anyway, I was just about to enter the Monastery in search of more information about the elves and my quest in general. At least according to the count who suggested I should check out the place. My party entered a temple in two levels that was desecrated. Dead priests where strewn across the floor. Pools of blood made the floor slippery and only very seldom did we actually meet surviving priests that where friendly. Something terrible had happened here.

Halfway exploring the first level I met a monk who told me that the temple had been attacked by dark dwarves while their priestess Lady Miriam was underway. The monk offered to join our group to help us through this system, offering his advice. I didn´t wan´t to miss out on anything so I returned to the town and dismissed my priest Werca temporarily by letting her rest at the inn. Then we returned back to the temple to let the monk join us. Strangely enough he presented himeself as Melian but when he joined the party his name was Eljot.

﻿
NPC:s have their characteristics hidden as well as equipment. If they use spells you never know exactly what they do but he turned out to be a good fighter nonetheless.
The first level contained nothing of exceptional interest except the sword Lightbringer, hidden in the northeast section. I am still not sure of how capable it is but it sure gives the impression of being a good weapon. I have a faint memory of it being described in a scroll somewhere as to draw energy from your enemies to heal yourself but I have frankly never seen that happen or not been attentive enough.

The group explored all the place but the only thing we found was a few scrolls of history which I will return to later on. We never met any dark dwarves and in general the monsters inhabiting this complex was quite weak and gave very few XP. Both the Temple of Dragon Servants and the Elven Pyramid hosts more dangerous opponents which indicates I should have gone here first.

At the second level of the temple we found a hole in the floor. By jumping down we entered the Sagacita Catacombs spread out over two levels. Here you could find more treasure but still there where no major changes of monsters. Orcs, Catchpoles, Mercenaries, Rats, Poisonous spiders, Skeletons and Zombies. All are parts of your adversaries but neither of them give any noticeable XP. This is not the place for grinding.


The second level of the catacombs does not fully use the whole square potential of the map so I suspected there might be hidden sections I had to uncover. I used my only instance of gunpowder to blow through walls here and there just to be sure I didn´t miss something. At one place, north of the stairs I blew a hole into another hex that when entered said the following:

These are only a few examples of the humour used throughout the game. Normally I don´t like to mix up such things but they strike a good balance and lighten up the game. Besides it shows to me that the authors had a good time making this game. And it really shows.


In order to get back up from the catacombs and the hole you jumped into, you need to find a rope. The rope could be found on the second level of the catacombs and here the authors once again show they are not without humour. Beside the rope lies a dead adventurer, when finding him the tune of Indiana Jones is played for a short while while the description inevitably hints at this being Indy. 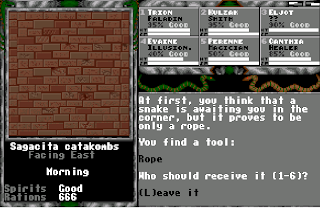 What you really need to find in the temple though is a sarcophagus that is extremely heavy. It is not obvious now but I remember that it will be very important in the end of the game. 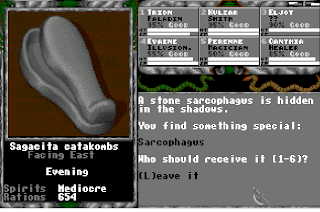 When finding the Sarcophagus it was nothing more left to do except to head up to the wilderness again. Unfortunately, bringing Eljot with me was a mistake. He never, ever told me anything except acted like an uncontrollable party member. I lost XP to him that my priest Werca would have needed much more. Not that this complex helped any of us to gain any more levels anyway as it would turn out later.

I returned to the town to sell of some stuff. At this point I had been everywhere in the new county so I had no other choice but going back to the other side again through the mines. Since I got a leather pouch from the oracle to contain a mask I suspected they meant the mask bearer in the elven pyramid. That would be my next target once again.


I returned to the dwarven mines at level 2. Just one level below I could grab another set of gunpowder. This was too tempting so I headed down there and grabbed my second batch of explosives and begun my return upwards. When getting back to level 1 I found the exit back to the wilderness blocked. Instead of looking for alternate ways I blow the wall with my second explosive and thereby forfeiting my advantage. At least I was back at my homeland again.

I immediately headed for the elven Pyramid. This time I was only interested in getting to the fourth level as soon as possible so I followed my maps there as quickly as I could. On the way I discovered that the locked door on the second level is a red herring (I blew the wall with my gunpowder to ascertain that).

At my last visit to the pyramids I got stuck in front of black flames that prevented my progress. The solution is to use holy water against them, then you are allowed to continue. I don´t remember where I found holy water because every potion just says potion but I suspect it was in the Monastery (that would make sense). You have to try to sell them in a town to see their names because there is no option like identifying items in this game. Then you have to keep track which partymember carry the potion and in which order they are listed in the inventory list. Does it sound cumbersome ? It is.

Beyond the black flames I had to solve a riddle from an elemental. Behind all these obstacles I could enter the room of the Elven king. It seems I had freed him in some way because he says that because I´ve found my way to him it enables him to go out and fight his evil opponent. Hopefully he means our common enemy and that he had been trapped behind the flames and the riddle, but what do I know ? 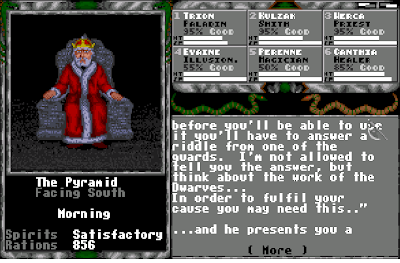 Lastly he presented me with a gift, an elven bow. This is a major magical item in the game. I have read about it in scrolls describing the most powerful weapons. Unfortunately none of my three magic users or priest could use the bow. Perhaps my paladin or smith but they are my frontline fighters. I have disregarded my need of an thief long time ago. 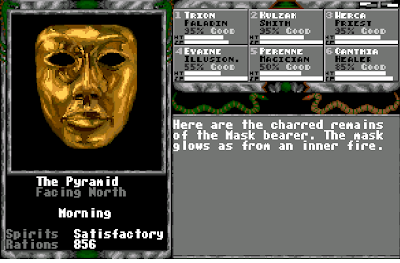 There where much efforts to get to the elven king but the only gain of that is the bow. The real objective of the Elven Pyramid is to defeat the mask bearer on the same level. He is not very hard to defeat and when dead leaves his mask. First time I went to the Pyramid I didn´t know I had to pick it up, or rather, I had nothing to pick it up with. But at the oracle it was obvious I had to use the leather pouch I was given so by using it I could get hold of the mask.


At this last level there is one single place that is worth fighting extra for. There is a group of Dragonettes in the south. They are very powerful as they could cast group spells on you but also gives you almost 3.000 xp each. Compare that to a mere Elven soldier or bandit who might give around 150 xp.


I thought I should mention the magic system in this game. Each mage has magic points. The number of magic points limit the number of spells that a magic user may cast in any one day. Then each individual spell has a value indicating how many time the spell could be cast each day. The more powerful the spell, the fewer times each day it could be cast. The only way to recover magic points is by resting.

During combat, to cast a spell you have to succeed in a concentration test (your concentration skill is based on you intelligence and the number of languages learnt). The closer to the front rank the less chance to succeed due to the stress of staring eye to eye into your enemy. Therefore the natural place for the mages is on the 3rd or 4th row.

This system works really well. But then resting is as good as risk free as long as you have one partymember on watch. Actually, the very last gaming session had me for the first time see one of my watches dozing! That meant creatures could enter our camp and stole a lot of things. At least all our rations. Without rations you cannot rest.

My party is now at between level 5 and 7. Most of the XP goes to my frontline fighters since as I´ve said before you get XP for your individual actions. If your mages don´t use their offensive spells they generally have a low chance to strike an enemy from the rear ranks, thereby yielding very few XPs. I am yet to get powerful party target spells so my mages are behind in the XP race for now.

Now that the Elven Pyramid is completed (and the mask was the important item here), I have only one more place to go to and that is the Derelict Castle in the northwest.

In the next post I will summarise what we have learnt about the story in the game so far during my trip to the the castle...