Legend of Faerghail - The neighbouring county

After only partly successful in the Elven Pyramid due to the fact that I have to return there later on, I thought about my next move. I could either go to the derelict castle or cross the mountains to the neighbouring kingdom to ask for help as requested by my count. I choosed the latter. Perhaps the story will get clearer by that.

I went down in the dwarven mines and at the first or second level there is a locked gate in the northwestern corner. By using the Steelkey found in the mines I was able to open the door that lead to a stairway that took me to the other side of the mountain.


When I got to the surface it was already dawn and the moon stood high in the sky. I had to navigate through the land slowly.

I looked for the town and fought some random monsters on the way. I passed the entrance to the Sagacita Monastery, but I thought I should go on. After arriving at the town I attended an audience with the count of Cyldane who ordered support troops to gather. He also advised me to visit the library of Sagacita to find information about the elves. Perfect! A direction that will lead to information.

Before we left for the monastery we decided to explore the surroundings first and found the oracle in the northestern part of the land. When we entered an old man offered to guide us. I did not have room for him in my party but worried that I might miss something without him. I returned to the town to dismiss my priest temporarily. Then I recruited the old man. He soon gave me a leather pouch and indicated I should put a mask in it. I wonder if that mask is found in the elven pyramid? He also gave some hints before going to the elven Pyramid. I had obviously been exploring the world in the wrong order. 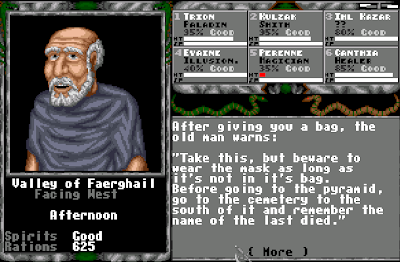 Anyway we entered the so called oracle that consists of four elementars, each with a riddle to be solved. This part was only slowly solved during a few years playing time in the beginning of the 90:s. Some I could figure out myself but there where always one of them that got me stuck until I found the solution in a magazine of the time. In the end you will be given a Staff of Age, supposedly a very powerful item but I don´t know its real purpose yet.


After having given the correct answers to all of the elementals I came to a place where a thundering voice spoke that I must find the face of Balaan (is that a mask ?). 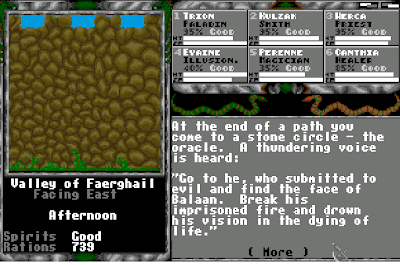 I returned to the town. Dismissed the old man and added my priestess Werca again. My group is now between level 4 and 6 and needs quite a lot of XP to improve. I must find a good grinding place. The best way would be to find XP heavy monsters in a complex and return there frequently to grind. Up and down. There is no fixed encounters in the wilderness so that is not the place to grind.

What I really am dying for to get is the smiths spell that works like the gunpowder, able to blow through any wall section. That would help me tremendously but it is still far, far away. The other spell I am waiting for is for my illusionist to get open locks. Not until then would I be free of the feeling that I still need a thief here and there.

One thing that is very irritating is that my mages Evaine and Perenne has had their main weapons broken (2 striking staffs and 2 staffs of light respectively). When a magical item is broken the smith can no longer repair it and neither can the smith in town. The only way is to get back to the complex where you find it. You have had to keep an eye on your weapons/armours when they reach down to 90%. If you are unlucky they will break and then it is too late. At least for magical equipment.
At one time in the wilderness the group got tired and I was forced to rest. One of my party members then had a dream in which there where a battle between dragons and the peoples of every race. It´s leader was very evil and the only ones able to withstand him was a group centered around a magician. The dream also told about a great sword embedded in stone, a great bow and battle axe. The weapons had the motif of a dragons head. This story hold up what I´ve learnt before of gathering weapons of a specific emblem. The sword is actually found in the first kingdom. But I have not solved how to drag it out of the stone yet.

I entered the monastery ....