Legend of Faerghail - The Elven Pyramid

It´s the elves that has gone mad according to the main story and the count is relying on me to either win the war or find out a way to return the elves back to normal again. Right before entering the elven pyramid I was asked by some elves for a password to be allowed in. "What is the name of Findals father ?" Luckily their ancestor tree could be found in the manual of the game so I was able to supply them with the correct name. 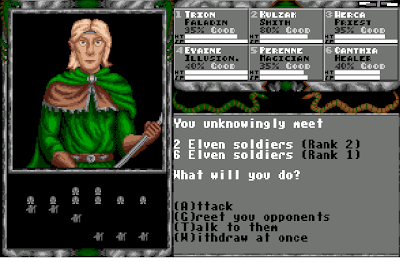 When we entered the Pyramid I was not too surprised to be confronted by elven soldiers. They where neutral though and didn´t take much notice of us. The northern part consisted of the blacksmiths quarters and among its rooms I found a coal of sack. Perhaps I will have use for it later on.

Not far from there I heard a voice whispereing that "The mountain will only open after the night". That must surely means something. I have my guesses but my memory might have faltered after 20 years. I know that the way to the other county is through the mountains, but I don´t remember exactly how I get there.

The Pyramid consits of four levels of different sizes. I won´t go through them in detail but will describe the important parts of each level and what you must find in order to proceed. The level design is generally very well laid out with obvious sections like jails, guard rooms etc. There is thought behind the map design.

As a sidenot I found an old note on my maps that I´v played LoF at least 116 hours up until 930321. I don´t keep track of playing times today. 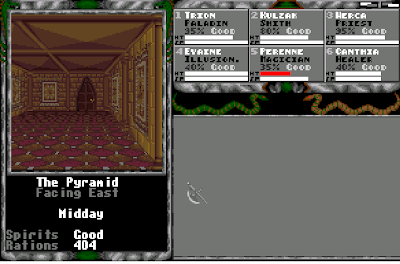 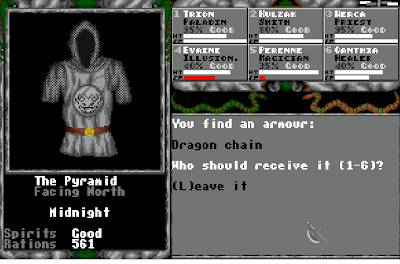 This level is where the elves keep animals. Among a dead lion I found 12 rations for example. 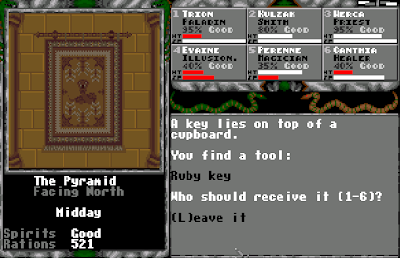 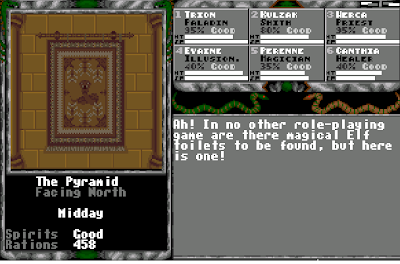 
Now this level turned out to be more difficult. Here you need to gather a key of air, key of fire, key of water and a key of earth to be able to open up different locked sections. There are also hidden doors here and there that might give you access to areas. To top it out there are at least two or three buttons to be clicked where the effects is not obvious unless you search around the whole map. I also said in an earlier post that LoF don´t have spinners or darkness squares. I was wrong. Here is the first place they are used. Very sparsely but they exists. 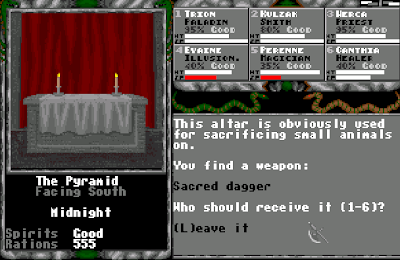 I couldn´t find my map for this level and so had to remap it once again. This is the last level and one of the smaller. I fould a glassy key here which I opened a locked door with but another door is still locked so I might have to return to here later. Besides, there are an important part in which you have to use the key of light to open a door to a corridor leading south. In the corridor black flames leap up to stop your progress. Here I need an item that I haven´t found yet so this is another reason for returning.

There are some places that I have to return to later on in order to proceed. The order in which I choose to play might not at all be in the correct order to solve everything. I returned with my party with the hopes of training them to new levels at the town. Half my party was eligible for that.

So what have I learnt so far ? I need weapons and armours of a certain emblem (dragon ?) to defeat the evil behind all. The mountains open at night and I need a gem, corona and staff as the key. These are fragments but very important notes. I should either try to get to the other kingdom via the mines as soon as possible or go to the derelict castle in the northwest. I cannot find my old maps for the castle so I have to remap everything. That will take time. I´ll give it a thought and we´ll see where I turn out in the next post.