I am glad to report that I have had an even flow of gaming time this autumn having played through or tested several RPG:s - including some I haven´t reported on here like Paper Sorcerer (not good enough) or the Fall of the dungeon guardians.

Next game up is the partybased indie-developed RPG Antharion. It was released in 2015 through Kickstarter but I have missed it. It wasn´t until earlier this year I got some glimpses from it but disliked it because the graphics was too cartoonish like for me. On the recent Steam sale for Black Friday, I picked it up for half the price and begun playing because the game had after all got some good reviews. 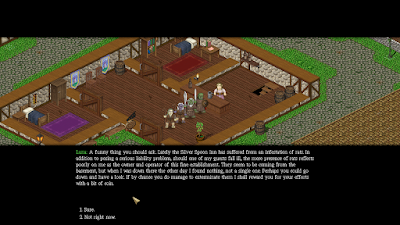 You start out by creating four characters and you may choose different races and classes or define you own because the classes doesn´t differ in anything except the preset starting skills. I choosed to create two warriors. One specialised in one-handed weapons and shield (blocking skill) and the other one in two-handed weapons and forage. I also added one wizard in white magic school (for healing) and one for black magic (direct attack spells).

I had to omit the grey wizard school which contains teleporter spells. But unfortunately there is no manual to the game so I could not have known that beforehand. I allowed every character to specialize in another skill as well and choosed Forage (gets better loot), Lock picks, Lore (finding and opening secret doors) and Alchemy. 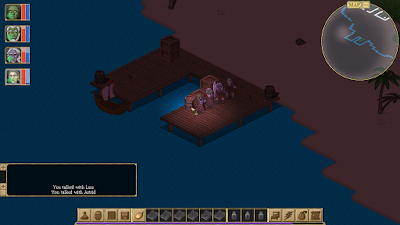 I have now played for over 25 hours and I like the game a lot. You travel and fight in a way that reminds me of the single character Eshalon series or even the old Faery Tale Adventure. You have no quest direction arrows and a huge overland map with no way of placing notes. The only help is that quest places is showned. This game is very large and there are several places I have sworn to come back to when I am more skilled but unfortunately I will probably have forgot their locations when the time comes.

The world is filled with a lot of mines, dungeons, ruins and wells to explore, cellars in abandoned houses etc. I really like that. Unfortunately those places are very much alike and the feel is that they are not filled with much personality or atmosphere. For example, there are no ingame texts that describe a place or environment. You just travel around along corridors, open doors and fight occasionally without any information about the place itself. At some places there are some sort of tougher fight that guards an item but that is not always the case. After having seen a dozen such places I get a little bored because this part could have been made so much better with little effort. 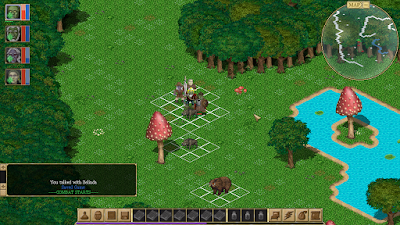 While you do not consume food while travelling you need it when you rest to restore both health and spell points. Food are relatively scarce so you have to carefully plan how often you rest and for how long or you will have to buy food to complement the supplies you find. The economy part of the game is pretty good with just enough gold to survive and occasionally afford an item or two but never enough. I am at level 13 now and only have around 4.000 gold. I am still waiting for a very powerful weapon to buy...

There are quite a lot of different weapons and armours in the game but while the game is an open world where you can travel anywhere and enemies don´t scale the system have built-in rules that disqualify you from using certain items until you have enough level. I don´t like that part because you will never, ever feel you get stronger. I would instead preffered if they would have increased the price of those items instead so they are harder - but not impossible - to aquire at lower than expected levels.

As soon as you approach enemies the game turns into turn-based combat mode where either side starts out to act first. Your dexterity determines how many action points you have but you can only use them to move or use items. You will never get more than one attack. If you elect to attack you cannot use your remaining action points so it is better to move first and attack later. This is especially true for ranged characters which increase hit chance by decreasing distance. A character can drink a potion or use an item and that counts as one action and then you can attack as long as you have at least one action point left. 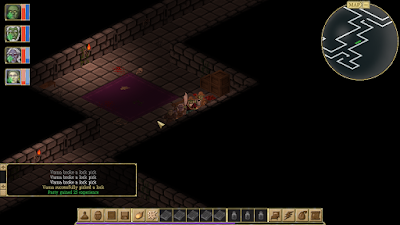 The later in the game I have progressed  the less I count on magic except for healing. I have equipped a two-handed sword to my offensive mage and found out that he does as much damage as his spells while not using any mana. The only difference is that his hit chance is lower than his spell ability. Overall, I find that offensive spell casters are somewhat weak. They need to replenish mana very often and that costs scarce food. If I would have restarted the game I would probably switch my offensive mage for another warrior.

Even though the vast world is filled with the occasional hard-to-pick chests I have yet to found any powerful items in them. The same goes for the secret doors you can find. I am not sure it is worthwhile to invest into lock picking or lore. Most of the time you only get a little more gold. This part is also slightly dissappointing in this game. Experience points for quests are too low compared to killing monsters while the diversity of XP gained from monsters are too small. You generally receive only about 15-30 xp per combat. 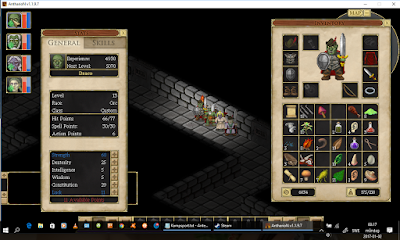 The main quest spans over the whole continent and is pretty boring. So far it is only fetch quests. I have now to retrieve three fragments from three different places around the world and I have only got one of them so far. I believe I have at least 30 hours left of the game and I am not sure I will play this out to the bitter end. Next post will be my review of the game.
Upplagd av Saintus kl. 12:33 AM