I bought a new game the other week. A first-person action rpg which reminded me of the olden Hexen or Heretic games. Or at least that was what I had hoped. The game is called Castle Torgeath and I was unfortunately immensively dissappointed. The game is slow, boring, filled with vast spaces with few variations and with not much to do other than fighting enemies or picking up food, potions or junk.

The game plays out like any other game in this genre. Fast clicking on your mouse to attack, Cast spells that drains your mana. There is no way to automatically regenerate. You must use healing potions and mana potions. When you level up you can raise on of your attributes one step. There is no skills or other advanced mechanics. 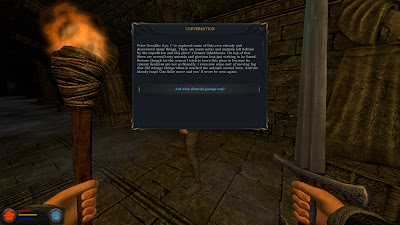 You start in a castle and the entrance is blocked as soon as you enter. You have to explore it to find out what has happened but also try to find a way out. It could have been fun but unfortunately it isn´t. The game is simply too simplistic with too large rooms and corridors with the same furniture and doors to open over and over again. There is no automap or map at all and since everything looks alike it is hard to remember where you have been. Too little variety and with no interesting items to find and use like different kind of weapons. I know there are more weapons in the game it´s just that they are rare.

The only thing which seemed a bit surprising is that you can find scrolls, parchment, diaries and books that tells some history or events of the place. This is the only single good factor I can think of. The graphics is ok but very simple. I never noticed any special sound effects but I was surprised about the voice acting which is ok. The theme music is also ok but nothing special.

For 8 dollars I cannot recommend this game at all. Maybe for 5 dollars. You could play it if you have absolutely nothing else to play but I feel it is a waste of time. Skip this game. I gave up after less than 3 hours.