Next dungeon crawler up is the indie game Ruzar - the life stone, a game which also pays homage to the original dungeon master. It is very similar to my last game The Deep Path: Labyrinth of Andokost (TDP:LoA) even tough there are some major changes.

First off, in this game you play one character that you will create by spending your starting points between the attributes. There are are a skill tree in the game for a path of warrior, rogue and wizard so you might want to spend your points on the attributes most likely to resemble your playstyle of these three classes. You are free to specialise or spread these points though.

The main story is presented during the start of the game but never after that. In these kind of games the story gives you just a reason for being where you are. The game style is the same regardless. Fight your way through each level and foe blocking your path, plunder and loot everything you can and become as powerful as possible.

You start out in the mountains but will eventually enter the temple, sanctuary, mines and caves. Each of them contains several levels and their own graphical style. The whole games is full of the small kind of puzzles we´ve become accustomed to, like pits that needs to be closed, buttons and levers that either opens secret doors, reveals treasures, closes pits or bring forth teleporters. There are larger doors here and there which requires specific kind of keys to advance. Those are often buried deep in the hardest parts of the game behind traps and puzzles or carried by tough monsters.

Since I just a few weeks before played TDP_LoA I cannot but compare the games. Both have their own style and there are several things that differs between the games worth mentioning:

I really like that the game plays so much faster than TDP:LoA. You move around quickly and can even navigate when showing the automap.

The interface is pretty good with the standard movement of the WASD keys. The character screens are clean and easy to understand. The sound of the game is ok and the music does not stand out and are not as good as in TDP:LoA. I do have to say though that it has strong resemblance to the music found in Legend of Grimrock.

Graphics in the game are generally good with much better framerate and animations than in TDP:Loa. But the different environments are not as clear and textures are not always as good as the single one in TDP:LoA. So comparing them a single level to each other TDP:LoA wins easily because it is much sharper and clear.


The game is filled with puzzles and hidden items but they repeat themselves a lot. For example. Hidden items are almost always revealed by pressing a hidden button. Traps are always disarmed with putting weight on a preassure plate and you almost always have to manually fall down in every pit because they reveal new sections of the map you have to explore. Having said that, the game uses teleporters in a very good way. There is even sections of evil disorientation when you suddenly find yourself travelling backwards in a corridor if you are not observant enough. Such things was part of the old school games like Bard´s Tale. 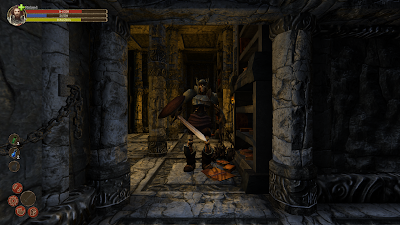 I have never got trapped though and never found any bug except for a crash to desktop once. You only have 3 save game slots so you have to carefully choose which to replace so you always have a save when you are safe and can return home.

I opted to play a mage in the game but I found it underpowered compared to a fighter. The spells do little damage and costs much mana. Mana is only restored by drinking potions or by standing beside a campfire (of which there are few). Unless you use a staff which slowly regenerates mana but that would require you to run back and forth between fighting and retreating and it would take too much time. There are several combats in which you are totally locked up in a room or in a confined space. To run around holding a staff and wait for your mana to regenerate while the staff itself inflict around 50 % damage of a melee weapon was never my choice of play. I thought I had the best combination as a warriormage because I could still retreat and heal myself using the staff which regenerated my mana.

I saved most of my skill and attribute points and think I ended the game at level 21. There are three skill trees for a playing style of warrior, ranger or mage. I begun to put some points into the magical tree but spells are still too weak. You will also get a lot more good weapons when exploring than good wands. I have no idea how it is to play a ranger using ranged weapons. There are some good ranged weapons hidden in the game though.

Featurewise the game is far more developed and advanced than TDP:LoA but I found it only slightly better. Also the price tag is much higher. I found the game a little too short. There are only a few different areas with a few levels each. Together I think the number of levels are almost the same as in TDP:LoA and it took me 11 hours to complete.

I would like to see a sequel though because this game has good potential to be developed further. I would suggest the enemies gets a little faster so square dancing would not be so easy. Or that they possess more abilities like freeze or slow. You have a bestiary in the game and when you have fought enough of a given creature you will see its relative strengths and weaknesses. My hardest opponent was the moving green garbage slimes because they leave a trail of poison and have poisonous attacks which drain you quickly. Fighting several of them in confined spaces was tough.

Also, more NPC with more elaborate dialogues would enhance the game as well. There are no lore or other information found during your explorations so you quickly forget about your main quest.

Overall, this was a good dungeon crawler that comes highly recommended.