The last couple of years have seen a tremendous increase in indie developers tackling the CRPG nische market. After completing The Quest I was looking for another RPG to sink my teeth in. First I tried Paper Sorcerer but never got hooked by it. It was by pure accident I found this game on steam for only $7 dollars to be released very soon.

The Deep Paths: Labyrinth of Andokost is a dungeon master clone with a four party assemble trying to solve a mystery below a city. The game is developed by only one person but still manage to achieve well respected graphics and sound. The game is far from as polished as Legend of Grimrock but still manages to hold on its own and the price tag is really attractive.

It reminds me very much of Crystal Dragon and Black Crypt for the Amiga. Not the least because of the colour palette used which is light brown. The game is extremely simple, yet functional with only three classes (Warriors, Rogue, Wizard). You are allowed to re-roll your attributes as much as you dare to and then the game begins. The four attributes wither helps to increase your damage output, armour class, mana or health. 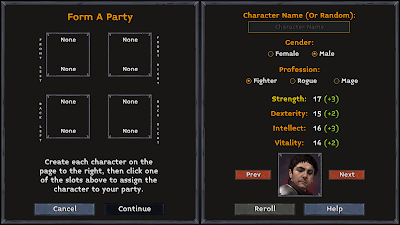 While the game is realtime in the way that monsters move even if you are stationary it turns to turn-based during combat which allows everyone - including monsters - to attack before you can move or attack the next round. This means it effectively kills the hit-and-run tactics used in these sort of games. You could still sneak around and hit the nemies from behind for backstabbing damage though but the enemy is always given one retaliatory attack.

One thing you do not have to think about here is food. No one will starve to death. No one even permanently dies unless all characters dies in a fight. Unconscious characters will return to life after a brief period of rest, even in the middle of fights and regenerates health and mana slowly over time. 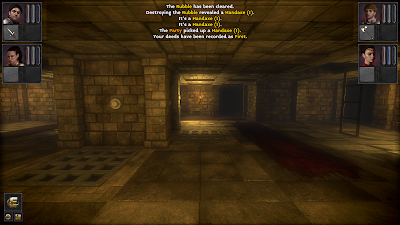 There are no spells but simple wands to use for your mages and ranged weapons for the rogue which is also necessary to open chests. Apart from that anyone can enter melee combat but I believe the front row has a greater chance of hitting. Weapons and armours are not found frequently. There are not a lot of items lying around. Most of the times you find arrows, pick-axes or ingredients to brew mana and health potions. But apart from that there is not much loot but I find it acceptable because there are also games that have som many items that you barely notice the effects when equipping them which also degrades the enjoyment of finding them.

The levels are quite small but there are no automap available, unless you find a map which often are hidden. I think that is good compromise because today there is just no patience to begin drawing maps with pen and paper again. It seems there exists a map on every level but it is often hidden behind a puzzle or hidden door. 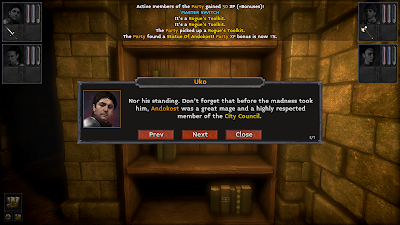 Sometimes you will find objects or trigger other events which will lead to dialogues between your party. They help to build on the story and adds a littel variety. Every level contains some sort of challenge to get through which mostly requires you to find the keys necessary to progress. Those keys are either hidden or lies behind rooms full of traps, skulls shooting magical missiles or huge monsters guarding them. I find the so called puzzles to be relatively easy. Only once I got really stuck when I had to find out a combination of clicking four buttons. My only strategy was by pure force of going through all combinations. That is not fun, only frustrating. If at least there would be a riddle or some sort of hint to help you. 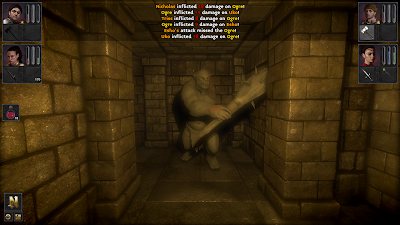 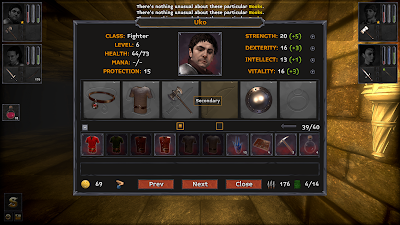 Combat is overall relatively easy but tedious. There is no strategy involved at all. Just pure strength where you try to get in more hits than you receive. You could always run away and as long as you can get far away the monsters will stop chasing you. The best tactic is to use a 2x2 area and move around each creature to attack them from behind to receive backstabbing damage. 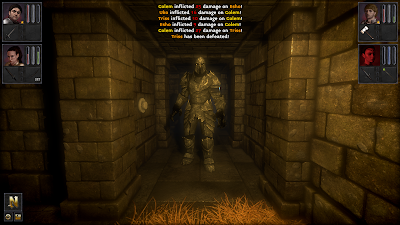 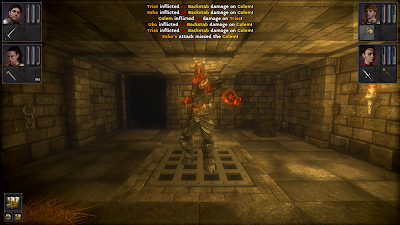 Mages are very underpowered with only weak wands. There is no difference in cooling down times of any weapons or magical wands used so you should always choose the one which inflicts the most damage. Therefore mages are worthless. They have no spells or any advantages over other classes. Their poison wand vastly underpowered and not better thant the rogues bow. At least the rogue is necessary in order to open chests. If I where to replay this I would use 3 warriors and 1 rogue.

Despite those minor drawbacks I had great fun playing this game. It reminded me of old good times and the game was bugfree for me. I also love the loading screens which have sampled the sound of an amiga discdrive loading. The title music to the game is very catching and good and I found myself listening to it a lot by itself.

The game also lacks any manual. I won´t say it was necessary. Much of the information is explained by tooltips but a short manual is always appreciated and it helps potential buyers to get a good overview of what the game offers.

I highly recommend this game for anyone who loves a dungeon crawler.