I persevered since my last post and was eventually rewarded. But before going ahead of things let me tell you what happened in Dragons´Eye.

I had just moved through several levels with lizards and trolls in my search of the heartstone gem when my next level was met by friendly priests who said they lived secluded from the world happenings above. They invited me to rest and even buy spells. There where a few locked doors there but no way out of this complex. I don´t like to steal from friendly characters but I had no choice but to see where these locked doors led. It turned out I stumbled straight into a cults' sacrificial ceremony and the whole appearance was a facade. They where all evil cultists praying to whomever their dark master is.

This level was quite hard since the priests are spellcasters and the tougher serpents that was responsible for the ritual where very good archers. After many hit-and-run fights with rests in between I was able to eliminate this whole sect and could advance into the mountain.

I have lost count of the order of the many levels of this complex but the final level was one of the hardest. It was full of traps that I at first was not able to spot, even with my thief (yes, finding traps hasn´t been my priority when levelling). After having taken serious damage every single time I was passing this level without even reaching my destination and after having spent dozens of antidote potions I was fed up with this. I had to find a new tactic.

Fortunately my priestess could help me since she possess a spell called "Find traps". With her at the front my party followed into her steps while she discovered all the nasty traps that where. It took longer time but it was worth it and I quicksaved at each small successful passage.

I don´t have to tell you the combats was hard and tedious. I could make one large battle per resting session of my group and had to travel back up two levels in order to rest.

Anyway, below is my.....fifth attempt ? to battle the last and final boss in the complex. I am now ready behind the spotted traps and put forward my thief to open the right door to bring about the conversation and then retreating back out again. I have summoned a few zombies and my mages are ready to cast fireballs and icestorms at the door entrance where I expect the boss and his minions to appear.

When half of the enemy force was killed at the entrance and the rest hurt I went into melee combat, but not before casting haste on my fighters. With that ability we where able to defeat the major evil in this part of the world and received a whopping 40.000 xp. 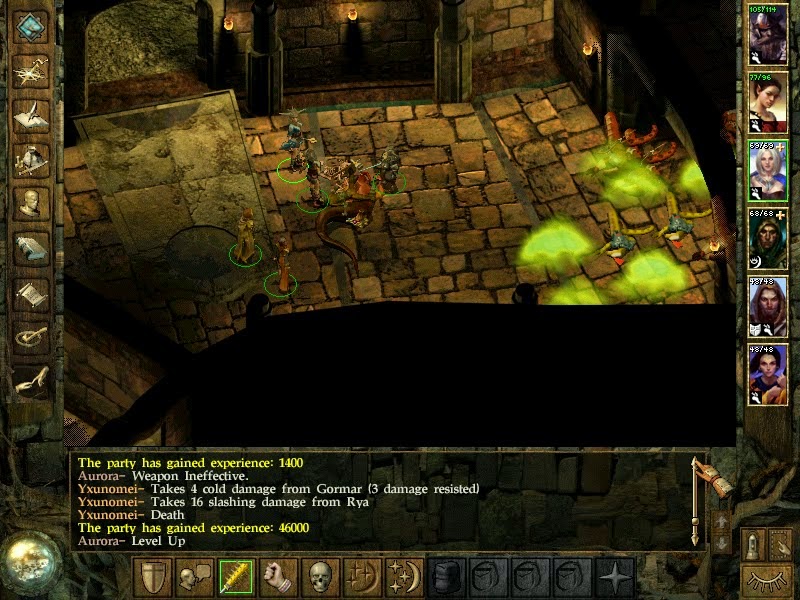 I was of course eager to plunder the locked containers at this level. That turned out to be a more frustrating endeavour than expected. Even though I have increased my thief´s skill in open locks to over 110 I was not able to open them. Fortunately one of my mages had the spell knock but that meant I had to retreat back two levels to memorise them and rest and then repeat this procedure for 2 times until all locks was opened up. Add to that my problem with the traps at the level and you can imagine my patience was being tested.

Having two encouraging comments on my last blog I did however press on and was eventually rewarded not only by completing the whole complex of Dragon´s Eye but I also got hold of the heartstone gem. I was now heading back home to my village Kuldahar, only to be greeted with an invasion of orcs into the village. I had to fight my way through to the druid Arundel. 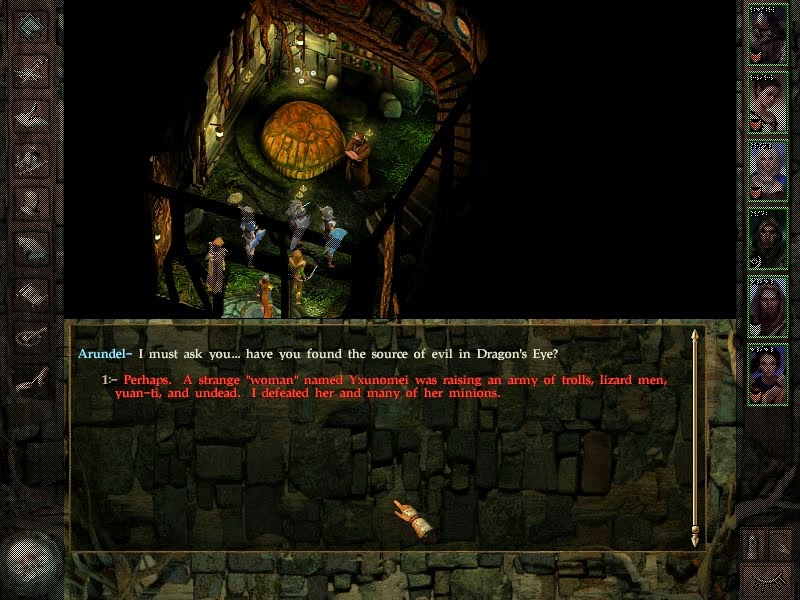 Having finally reached the safe haven again where I looked forward to sell all my stuff, get some gold and upgrade my party I was stunned by the fact that Arundel was in fact evil himself. He congratulated me to have killed one of his adversaries and then he humbled me and teleported away but not before telling me that the real Arundel lied dying in the floor above.

I met him and with his last breath he told me to take the heartstone gem to the elven fortress of the severed hand. Only there would I find a person able to use the stone. I am not sure if Arundel was just recently duplicated or if he has been misleading me for a longer time but hopefully this was the only time I hadn´t met the real Arundel. Unfortunately he died of his wounds and I was again left to my own. 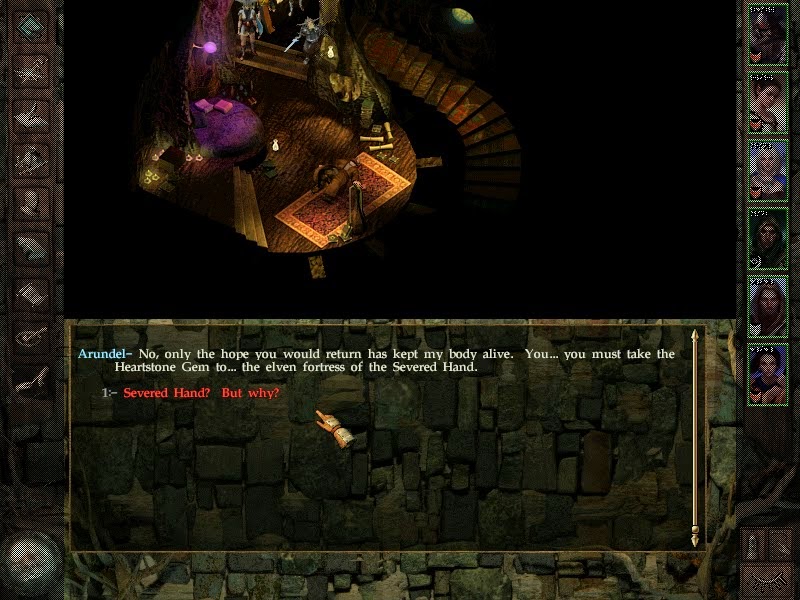 We cleaned up the village of the rest of the orcs roaming about and reequipped ourselves in the shops. As before I could just dream of buying a good magical weapon but at least I have over 7000 gold now after having sold of some magical items found.

We headed to the new fortress of the elven Severed Hand and entered the third chapter. I had just to enter to realise nothing was normal here. It was full of dangerous dark goblins. I had to battle my way upwards through the stairs for several levels until I reached an area with elven ghosts. Fallen warriors in the defense of the fortress. In the desperate fight against the evil their leader Larren had tried to cast a powerful protection spell but something went wrong and the few survivors was exposed to even more cruelty. I now had to stop all of this in order to reach my goal. 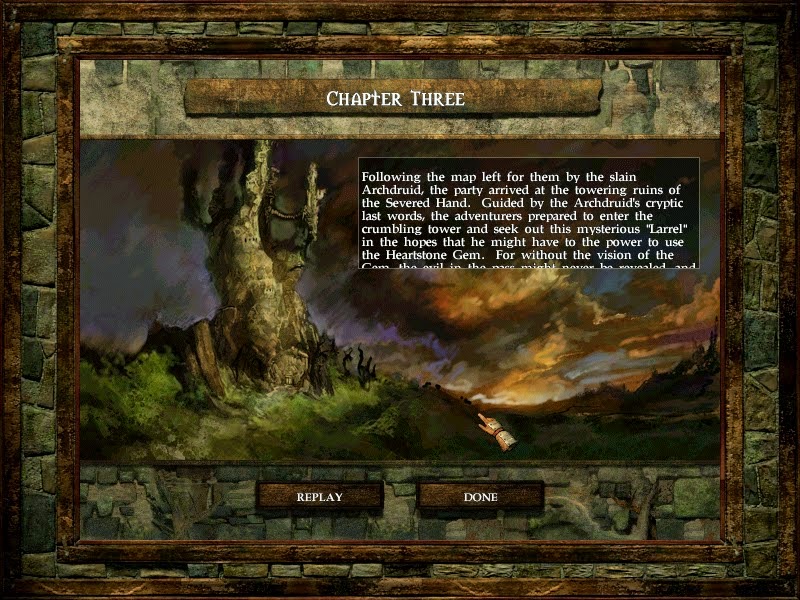 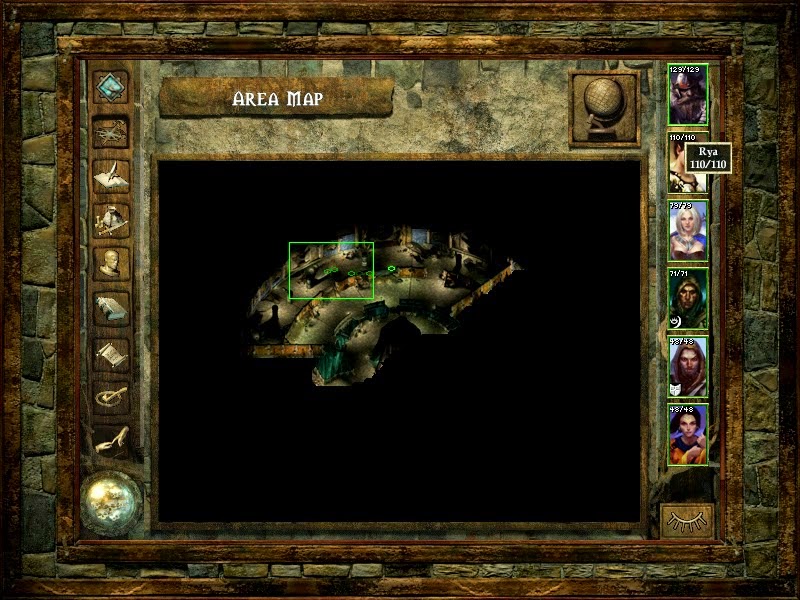 As before all the levels was indoors in cramped areas with fight after fight. At least I could rest when I needed to but it is becoming a chore. We´ll see how long I will let this game continue before giving it my final ratings.


I have always preferred the first person view instead of the 2D-isometric approach seen in this and other similar games. For me personally partybased games like Wizardry 8 or realtime partybased games like Legend of Grimrock always give me better immersion into the gameworld. Even in combat.

One might argue that Icewind Dale´s perspective should give me better tactical disposition during combat. And that might be true in a few instances. But I would say that the tactical combat was way better in the old AD&D SSI games then. Here it could be hard to make up a line in battle since the characters sometimes tries to get around to get a swing to a foe so they are harder to control.

Even so, I do use the environment as best as I can to my advantage but it is always the same kind of tactic. I fight from the door entrances where the enemy can´t surround us easily and where my mages could throw in fireballs and icestorms into the room before engaging in melee combat. But that is about as tactical as it gets.


Most combats could be solved with this approach and right after you rest and restore your spells and hitpoints and are ready for the next one. In a few places I have had some trouble winning without any characters death and there I have had to try out different kind of tactics. But 90% of the time I only use the direct attack spells like Magic Missile, Chromatic Orb, Fireball, Icestorm and haste. Haste has proven to be one of my favourites since it doubles the number of melee strikes I can make. The drawback is that we are fatigued afterwards but I always rest and restore the group so that have never been any problem so far. 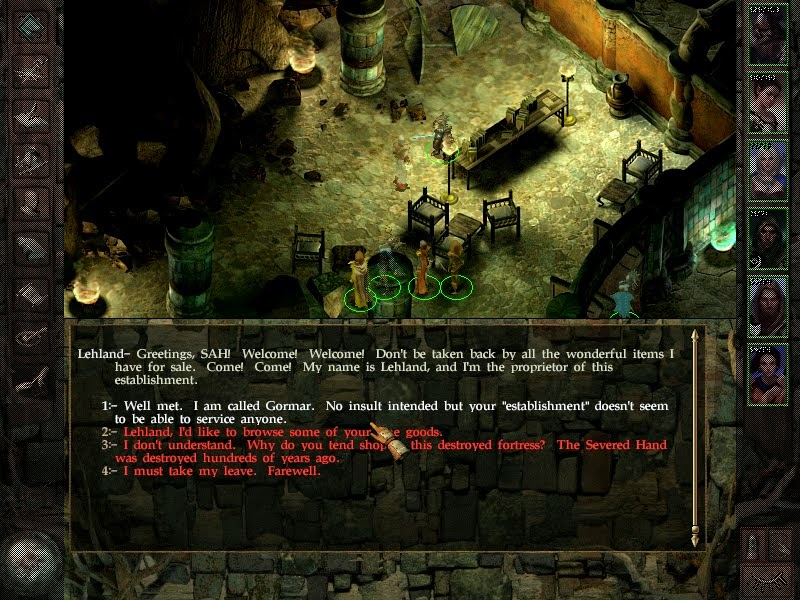 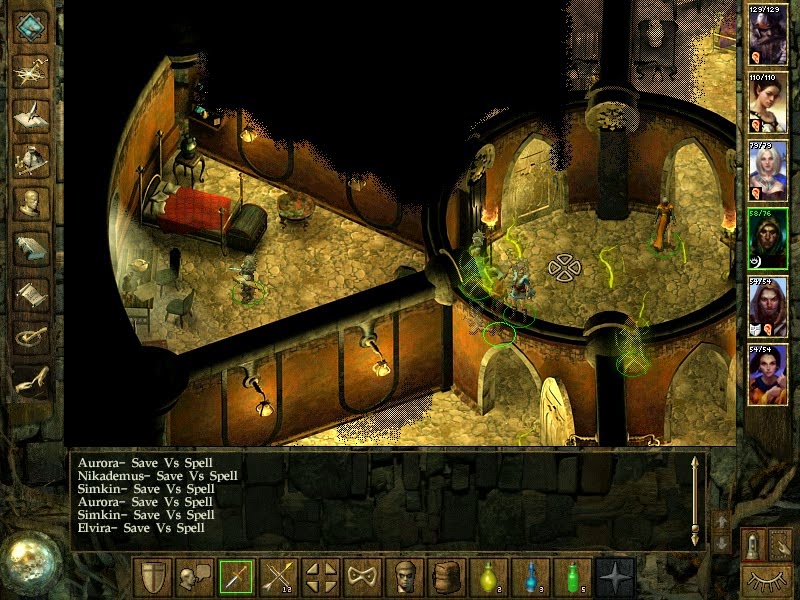 Slowly I progressed through the enormous elven tower in search for Larren, the only one that could help me use the heartstone gem. Unfortunately he was the one that failed with the protection spell and seems to have gone mad. I eventually found out I had to collect four pieces that could be used to restore a machine that was requested by one of the few elves that hadn´t lost his mind here.

What had happend was that almost all elven defenders had become ghosts and had their souls stolen. They where the ones that attacked me but a very few had retained their minds even as ghosts and gave me valuable information. I eventually found Larren himself and he was unable to communicate with me until I had restored a machinery.

When he spoke he gave me interesting and valuable background information. I have to add that the voice acting in the game is very good even though it is only used on very special NPC:s. 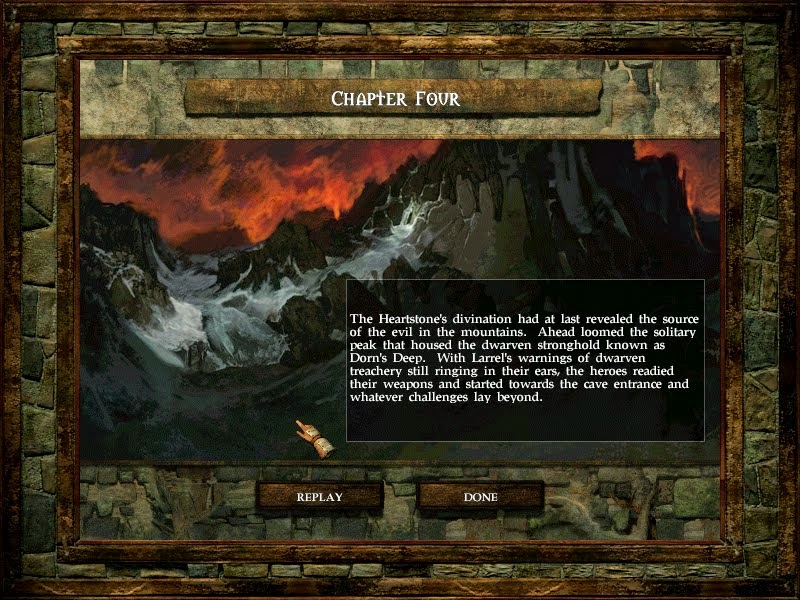 Anyway, Larren by using the heartstone gem was able to locate the source of evil that troubled the north to a place called Dorn´s Deep. It is to this place I am now heading....