When Baldurs Gate arrived in 1998 I thought it was one of the best - if not the best - RPG I had ever played. It set a new standard with its in depth story and detailed gameworld. Where dialogue choices where available at every interaction with NPC:s. The voice acting was supreme the music was excellent. In short Baldurs Gate is one of the finest games ever released.

When Icewind Dale was released just a few years later (2000) I had already moved on to other games or slightly tired of the huge adventures in Baldurs Gate 2. Soon it was forgotten in the history of RPGs. Until this summer when I had more time than usual for myself but almost no game to play. At that time I managed to buy Icewind Dale complete for a few dollars at gamersgate and started up just a week ago.

Icewind Dale complete consists of the add-on adventures Heart of Winter and Trials of the luremaster.

The manual is over 150 pages! When did you see such a behemoth last time ? I was confident in my old school skills of the AD&D system so I didn´t read the whole manual to start. I quickly glanced over the statistical tables for each race, class and attributes to decide my group of six.

After one hour of rolling up my party I come up with 1 warven and 1 human fighter, 1 elven thief, 1 human priest and 2 elven magicians. You can choose specialisation for the mages but I abstained.

We started our adventure at a tavern in the cold outpost of Easthaven far up in the mountains. Just when we ordered the first round of ale, a man introduced himself as Hrothgar, the one who decides in this outpost. He welcomed us and said that after we have had a quick glance around the village, we should go and visit him. He had something he wanted to discuss with us.

I immediately took my group out to explore the outpost and talked to every citizen I could find. Most where ordinary citizens with not much to tell but since this is a Bioware game there is a lot of dialogues with many of them and I learned a lot about the town and rumours. People was worried. Strange things had happened around the area. I also helped a drunkard to get his last bottle of wine and a shopkeeper to get rid of a wolf in his home.

We started out with 500 goldcrowns and I used most of these to buy my two warriors armour and weapons that was fit for their chosen proficiencies. The whole group started out with one quarterstaff each and that is a weapon I have never chosen as a specialty.

Just south of the outpost across a bridge I first stumbled upon my first opponents. A group of goblins equipped both with melee and ranged weapons. They attacked me and now it was time to revive my old knowledge of the AD&D combat system. Everything plays out in realtime but you can pause the combat at any time issuing orders if you want to since the combat is divided into rounds.

What is good is that you have the text window just below the mainscreen and you will get info about everything related to the combat. Who is attacking whom and how much damage that is delivered or received. You can also switch on detailed statistics to see your dice rolls. Very good to really understand the combat system but for me the overview information is enough.

Normally I never split up my force by attacking several targets but instead take them down one at a time. My magicians was held back and occasionally I used their weak combat skills to throw their only memorized magic missile into the fight. Later on I equipped them with darts doing a meagre 1d4 in damage.

I eventually killed all goblins even though I probably had to reload once since one of my member was killed and I had no intention of reviving him for a fortune of gold at the temple. In the beginning I looted all items I could to be able to sell them back at the shop for a few gold crowns. Eventually I was able to equip the rest of my group with armors and weapons. 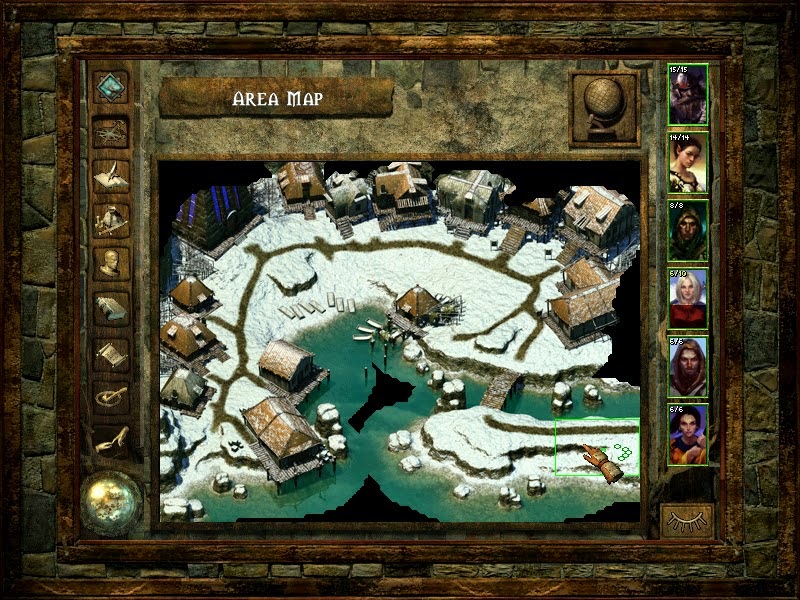 One of the first major tasks was to help Easthavens leader Hrothgar with investigating the disappearance of a caravan for the outpost. We immediately prepared and went eastward and came up to some caves that was filled with orcs. They are stronger than goblins but still manageable for my team. Here and there I found some chests filled with some good items like my first potions or the occasional magical scroll.

There was one particular combat that consisted of several orcs and an ogre that I had some problems with defeating. After 3-4 deaths my solution was to drag them to me. Kill the first of them and then retreat from the cave. I was then able to rest my team and save and could go back right in again. They where still waiting inside at the entrance. That´s good. But the tactics used also meant I could take them down piece for piece. The cleansing of the cave gave me valuable experience points and we all raised to level 2 fairly quickly. I also found the remains of the caravan and was able to report back to Hrothgar to be given even more xp.

After having exhausted all sidequests in Easthaven I was ready to join the expedition. A voice begun to speak about the hard marsch of the expedition. It became trapped when giants blocked the passage in the mountains and hurled boulders down upon us. Many died - inclusive Hrothgar - and only my group eventually survived and managed to reach Kuldahar. But not before we had to clear out an entire map with filled with goblins fortified in towers and mills. 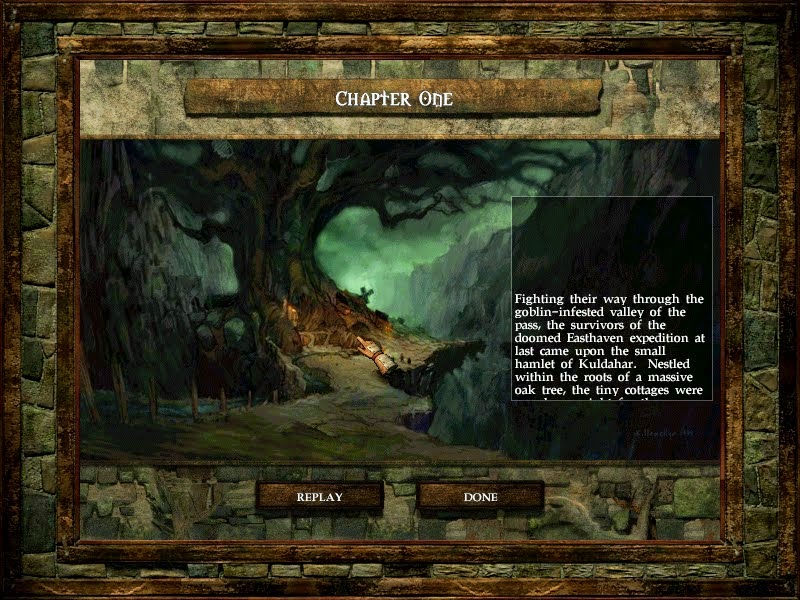 We finally reached the small village Kuldahar that we where sent to help but now we looked more like refugees. At least I was glad to find a shop where we could sell all of our loot - bows and weapons looted from the goblins. They didn´t bring in much money so it was hardly worth it. Magical items costs several thousand of golds and I have not reached one thousand yet.

The wise man in the village was the druid Arundel. He was sorry to hear our sad story since he is desperately pleading for help. Malovent forces in the valley are on the move. It is not secure to leave the village anymore and many people have been snatched away never to be found again. Arundel guess the source of the evil could be found in the valley of shadows and want us to explore and find out more about this. Since he is a druid, he can feel the whole natural balance becoming disturbed by this new threat. 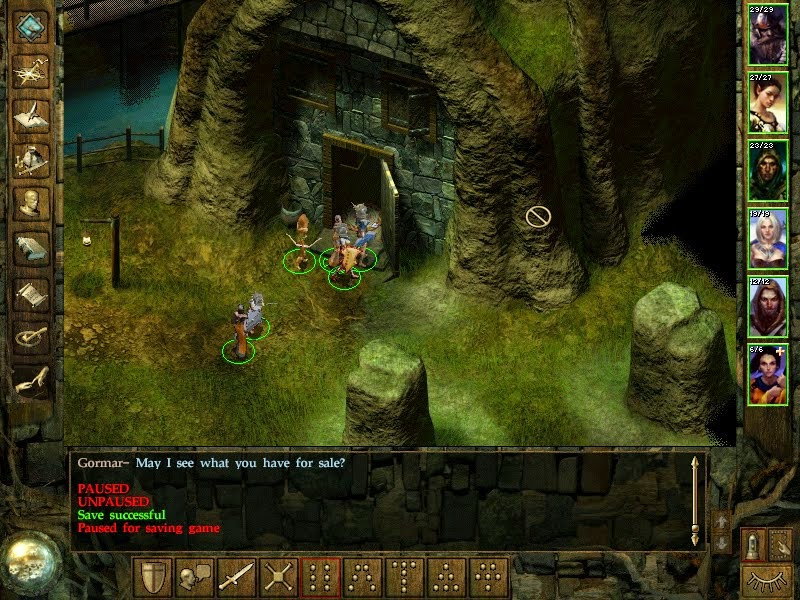 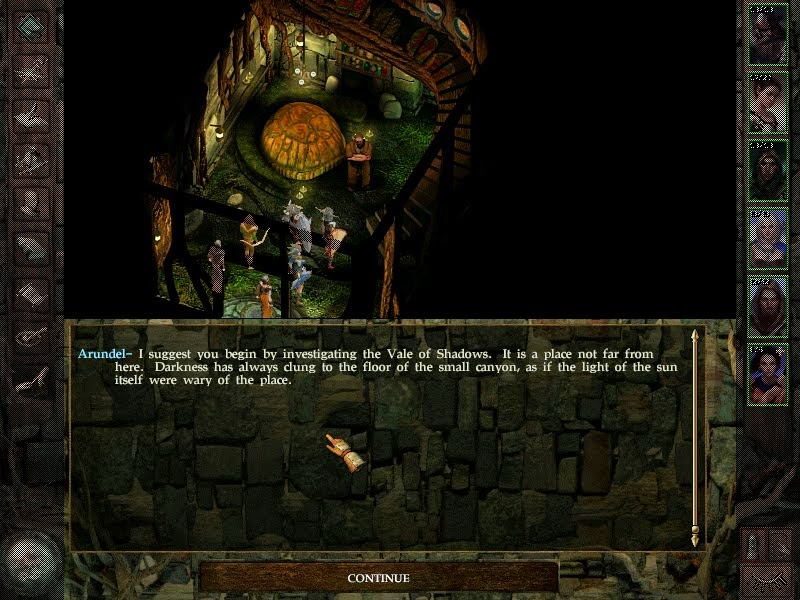 Before leaving we explored the whole village. It is complete with magical shops, inn, tavern, smith and whatever you need. A good place to have as your base.

When I was ready to leave we went to the valley of shadows. It was a snowy place in the mountains guarded by both giants and undead creatures. Small caves and alcoves was spread out everywhere. Inside I had to fight hordes of skeletons and zombies and the occasional ghoul. Most of these combats was pretty easy and we gained much needed experience points. Enough that most of us could reach level 4.

When you level up you are given a random roll to your hit points and at some levels you are given proficiency points to spend on weapon categories. The thief get points to spend between open locks, stealth, pick locket and disarm trap. I put most of my points into open locks and stealth. I have yet to use stealth to my advantage. I hope to succeed in backstabbing soon.

There is a gameplay option to allow for maximum roll of hitpoints at level-up but I don´t have it checked. Instead I plague myself by reloading until I am content with the roll. It´s practically cheating just as bad but it reminds me of how you do it in the old-school RPG genre which is part of my background. 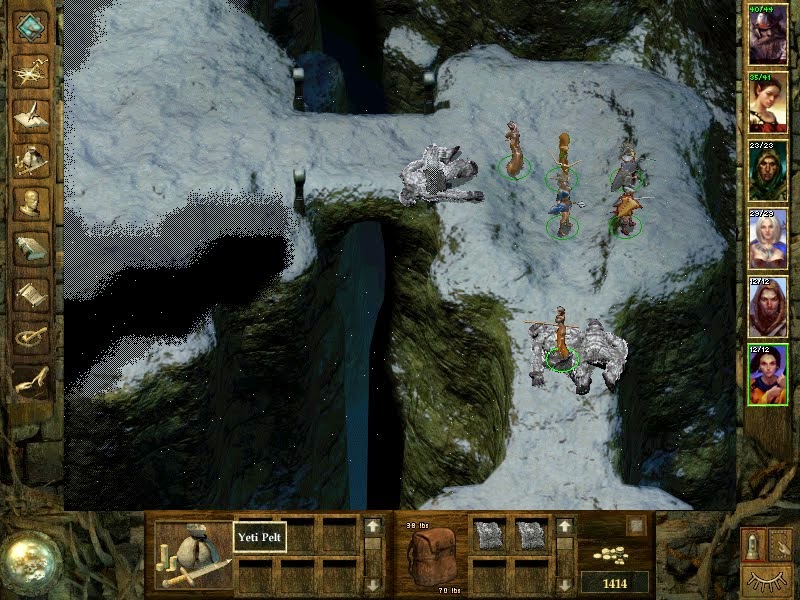 In the valley I soon found a few keys. They where important to enter an inner sanctum. There I met an arrogant undead creature named Mythos that denied me further investigation. He wasn´t all out evil and said he had nothing to do with what happens in this valley but since he refused me to investigate further we had no choice but to discuss it with steel in hands.

He was pretty weak despite his supporting minions but he didn´t have any good items on him either. Instead the few magical item´s I´ve found is mostly coming from locked chests. They have brought me short bow + 1, mace + 1, longsword +1, warhammer + 1. Those are really needed because I have met undead that can´t be injured my normal weapons.

My mages are still pretty useless in combat. At level four I could cast two magic missiles before running out of offensive capabilities. I am waiting for my first level 3 spell. Luckily, resting is not that hard in this game. 90% of the time you could rest without random encounters. 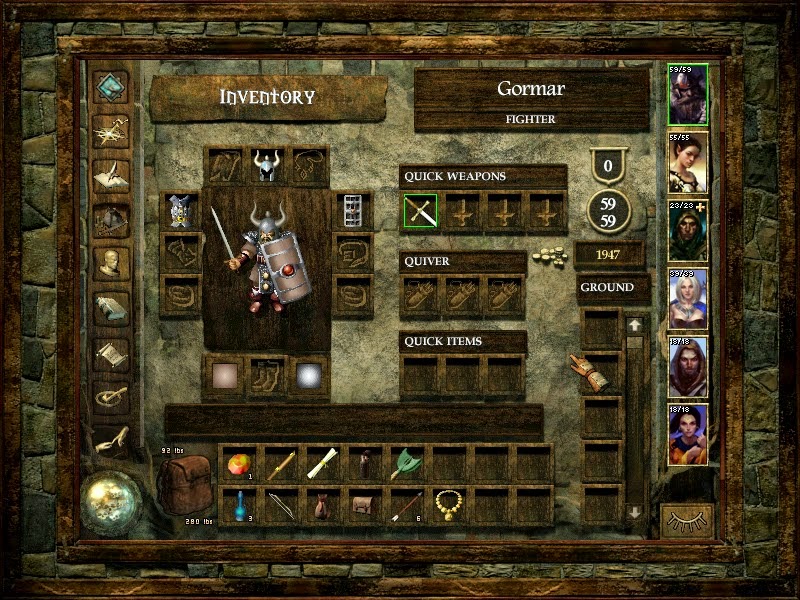 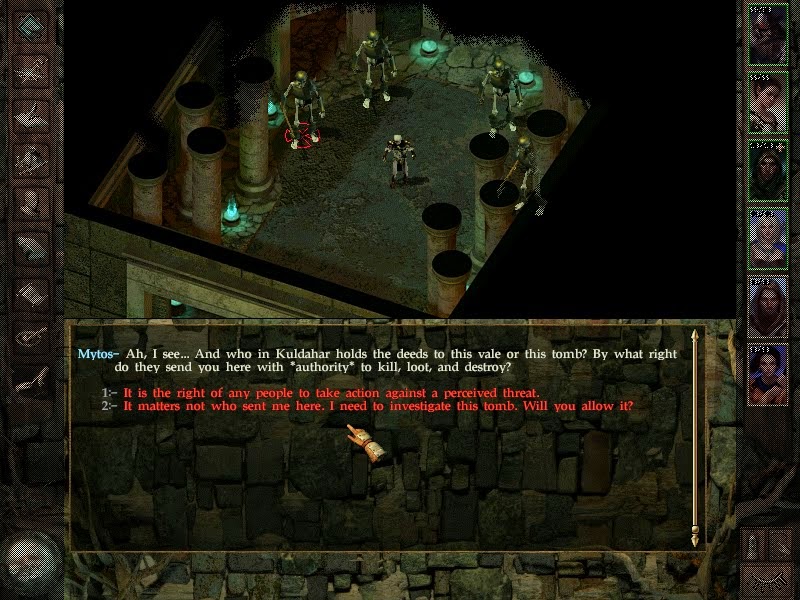 So far I like this game. The story is straight forward, the dialogues are well written. The most interesting NPC encounter has been with the evil undead Mythos that guarded the inner sanctum and an unfriendly inn keeper who illegally had taken over the establishment when the former owner mysteriously disappeared. But that´s another story.

One more thing to add, only major NPC:s have voice acting accompanied to the dialogue. The others have text only. I don´t remember how Baldurs Gate had it.

I need this kind of slow, turnbased game right now so Icewind dale fits perfectly. We´ll see how long I can keep up with this before I tire of the concept. 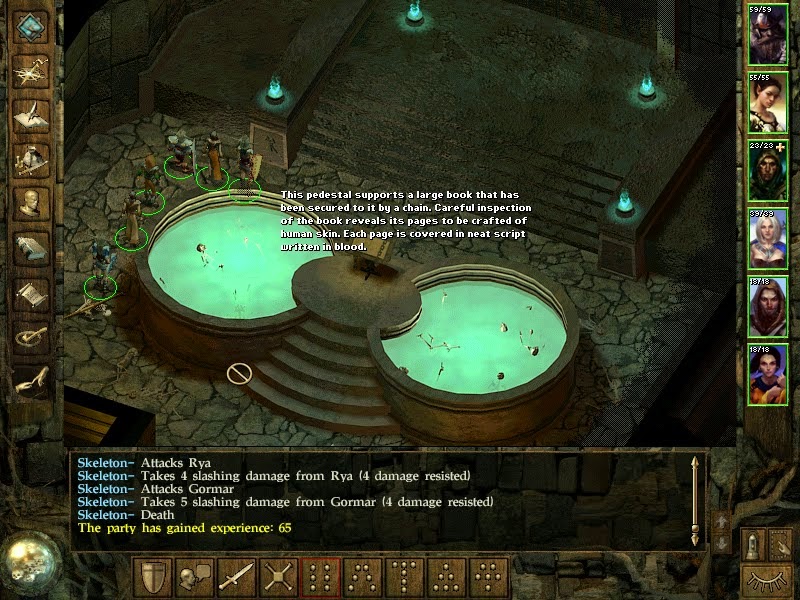