My now pretty experienced group was reequipping in the village before going to explore Dorn´s Keep. That means I am to sell off all potions I have no use for. I almost never use potions anyway and end up selling or dropping them if I am out of space. A habit inherited from the hard old-school RPGs I suppose.

I also always resupply my stocks of arrows and bolts for my thief and the two mages. Their combined strength are enough to seriously wound any foe at a range.

Then I am always visiting the blacksmith and carefully examine every magical weapon to find out which is the better one before selling anything. That means to check the damage dealt, THACO bonus, any special effects and weapon speed and also taking into account my proficiency with that weapon type. Unfortunately you have to add upp all numbers by yourself since there is no help in the GUI that shows how much total damage you can deal.

Last but not least, a visit to the local magician allows me to buy spells I am in need of. 90% of the spells are found during the adventure but you can buy more powerful spells if you have enough gold.

I have now gathered over 50.000 gold so I can buy some expensive magical weapons but I don´t find them better than the ones I have already found so the store is not that important in the game and I am beginning to find it quite limited since the stock never gets updated. It´s the same magical weapons/armours all the time.

When we where finished we set out for Dorn´s Deep.


Dorn´s Deep was a dwarven, underground complex consisting of both natural and dwarven made caverns and hallways. It was a huge complex divided by several large areas, each of which we must progress. Each with it´s own enemies and obstacles. 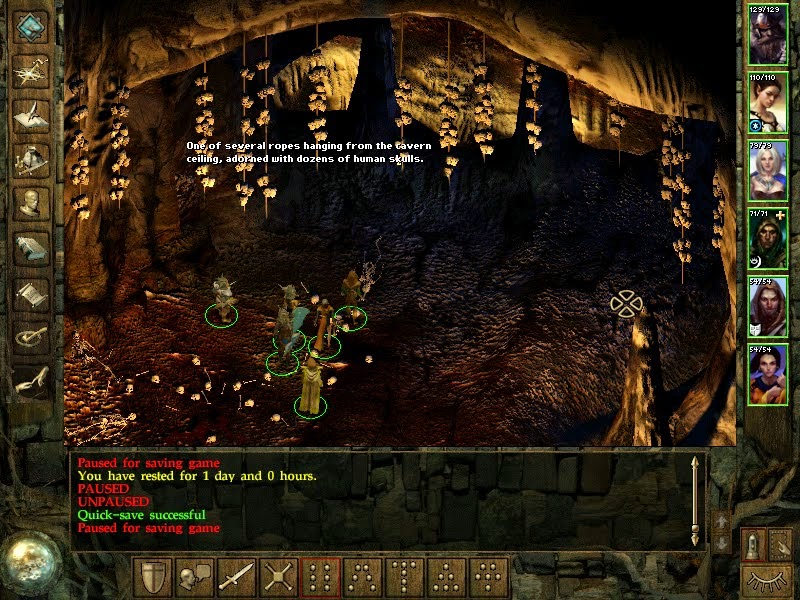 At this time my group was probably at around level 8 or 9 and I felt we could handle most of the dangers thrown at us without too much difficulty. At least when we where able to rest after every fight. In general there is only at a few places where you cannot rest but that is often solved by going back to a previous level and rest there. This means that I have never felt the need to use my potions.

In this complex I found out that it seemed there was six major lieutenants to the dark lord, each one ruling over his own part. After having killed the first one I got his badge. I suspected I had to find all of them and gather all the badges and it was exactly that which later turned out to be my goal. 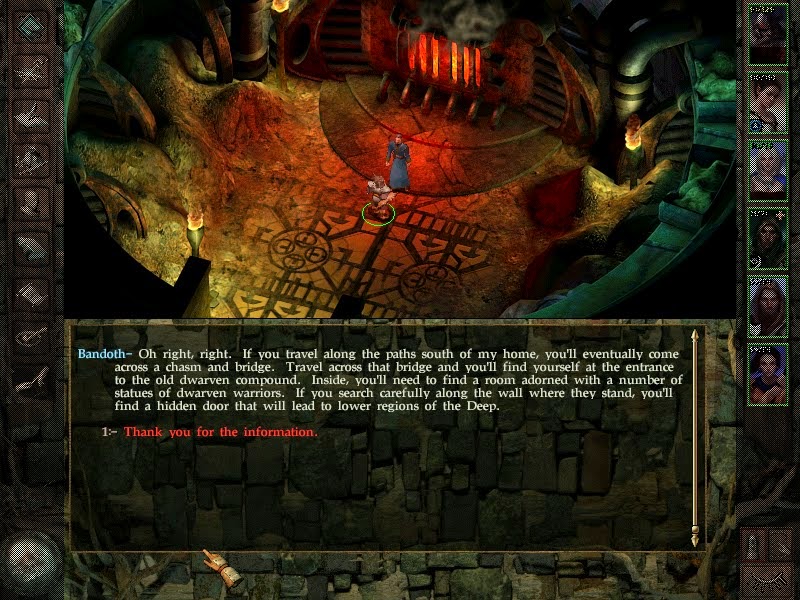 The dwarven halls thrown me my first puzzle in this game. The table below consists of several different symbols. In the next room I found a floor with the circle depicted. When I entered the circle all hell broke loose in the form of traps. The only way to solve this puzzle was to enter the circle from different angles and only step on the symbols that was on the table in the previous room. 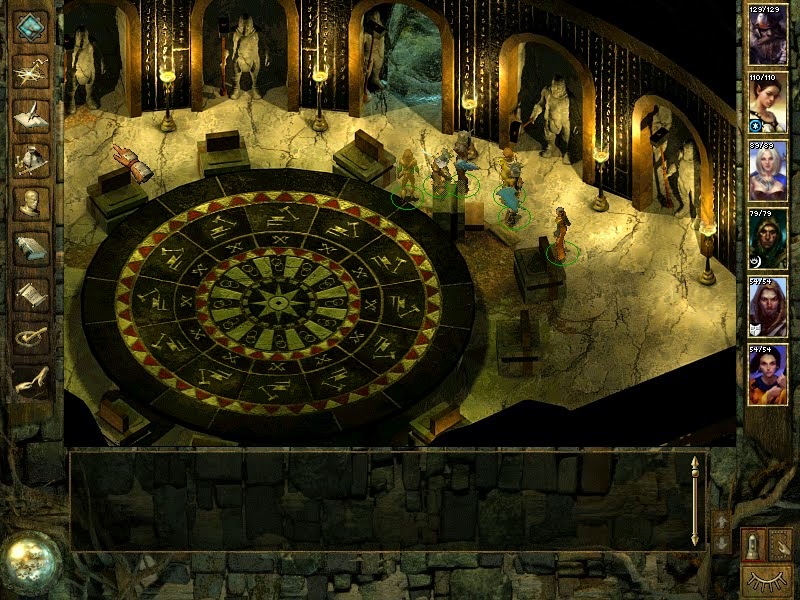 In the end I had to destroy a very powerful undead lich. The only way to destroy him was to get the key to the room where his urn was placed. That in itself was difficult enough. As long as I didn´t get the urn I could fight the lich and his minions over and over again and he would respawn everytime after a certain amount of time.

As always when the combat are a bit tougher I use haste on my group. That is an extremely powerful spell since it not only makes us move faster but attack twice as many times per round. I could quickly destroy my enemies before they have the time to unleash really powerful spells. 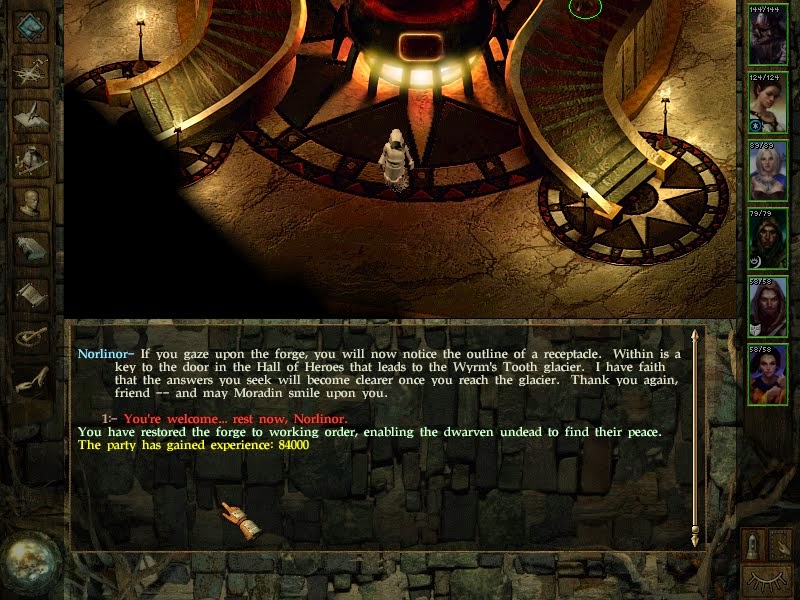 Regarding the thief, I use him for scouting and sneaking sometimes and to bring forth hordes of summoned creatures to attack the enemy before they see me but most of the time he points out where my mages could throw fireballs and icerains. I have only once used him for backstabbing. I don´t find that ability useful enough. Instead he use his bow most of the time and protect the mages.

After having completed the whole Dorn´s Deep I found myself in a place called Wyrms tooth. It felt like a continuation but this time I was back above ground on a frozen plain and had to fight ice giants and elementals. This was quite a large place in itself and I rescued a lot of slaves and got much needed experience points so we all reached to level 10 or so.

I had to admit that the variety of the graphics, levels and monsters turned out to the better after the elven part of the game. It felt more refreshing to go around here even though there where as much combats as before.

I quckly entered both chapter five and chapter six... 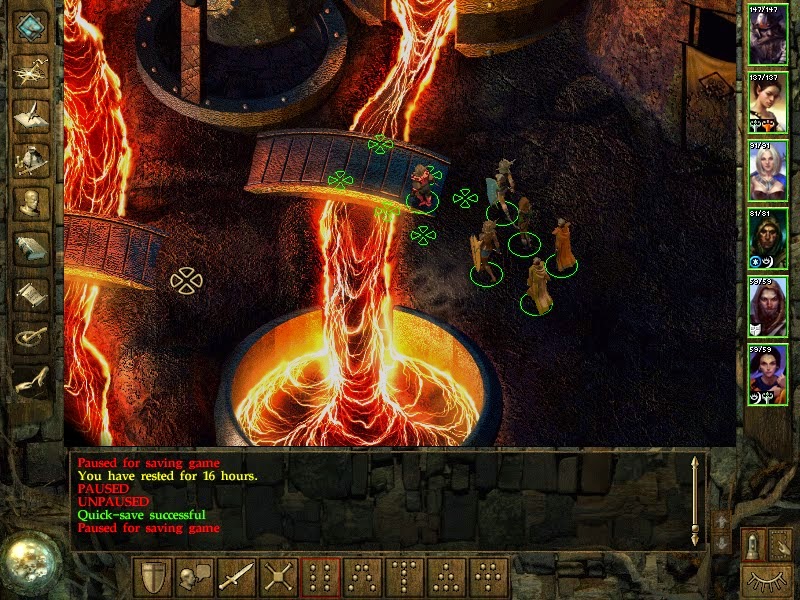 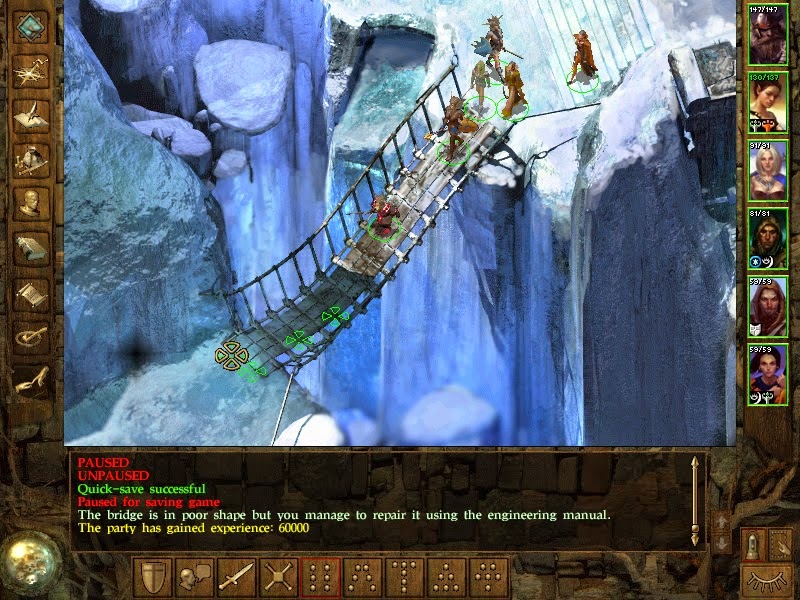 ...and without going into any details I finally killed all major lieutenants and found all the six badges. They where needed in front of a stair to be but into the ground to allow the stair to open up for me. By climbing the stairs I finally met the one evil that lied behind all of it. But that I had thought before as well, only to be let down.

He throwed in a tough fight by summoning huge amounts of minions to fight for him but by using haste and go only for the evil priest I could take him down before being killed myself and then all goes black and I find myself back in the first town of Easthaven. Only now, something is very wrong with the small settlement. It is covered with ice. No humans are to be seen anywhere and cyclops are patrolling. And I thought I had completed the game.....hmm...

The problem here was that I could not rest my party. I was injured by the last fight and also had to fight a dozen cyclops. Fortunately I only had to meet them two at a time at most. It turned out all the humans had been gathered on an island in the center of the town. I managed to free them and the priest among them told me that the evil behind this had broken into the church but he knew of a way in despite the permanent ice that covered each building. 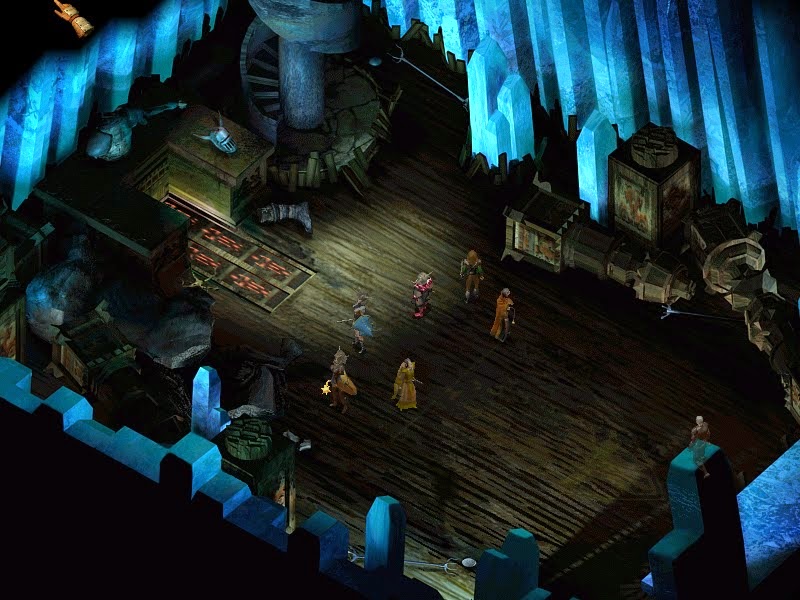 We entered the church but had to look for another way into the deeper part of the church by searching the tower. Fortunately it was possible to rest here.

After climbin the staris to the tower I stumbled upon one of the hardest fights yet. The shopkeeper himself was there, mocking me. He had obviously been placed into charge of this village and was proud of it. Everything was planned he said. The expedition was only a diversion to weaken Easthaven and allow the evil himself to build up forces here. The avalance was carried out by the frost giants to stop the expedition and so on.

I felt I was very near the end now. A fight broke out and the whole room was spawning with creatures while lightning bolts where triggered and moving around the room endlessly. I had no chance to keep my mages out of harms way and they died one after another. I played out this combat several times without winning.

I must find another tactic....