Aethra Chronicles - In search of the mainquest

I cleared out the small underground base inhabited by orcs that haunted the small village. It consisted of only one screen so it went quickly fast with perhaps 3 or 4 fights. The good thing is that so far there are a fixed number of encounters that seems to occupy certain rooms or parts of a dungeon. When you have cleared them you won´t get into any other fight in that area. I like this system because it allows you to retreat back to safety without being harassed on the way. Combined with the fact that you can always run from combat this is a little bit too good to be true. 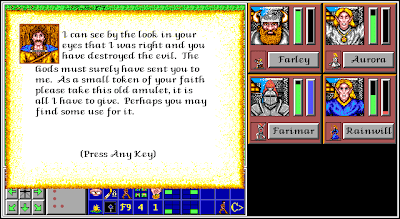 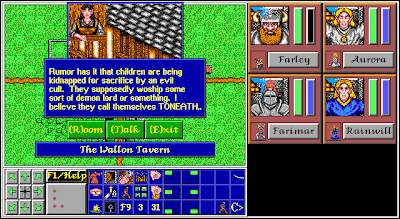 Anyway, even though the fights in the cave hardly gave me more than 1.000 xp or even less, I was rewarded not only by an amulet given to me but also 1.000 xp each. They where very welcome I can tell you. I decided to leave this area in the northwest and go back to recruit a good thief. I want to try out the deadly strike skill and also let the preassure of my mage Rainwill to be the groups thief.

I went to several towns in hunt for thieves to recruit but it was only in the capital Stormhaven where I found some. I wasn´t that impressed by them at their level 4. They where only slightly better than my mage and did have a pretty low skill score in deadly strike. I decieded to go for a new mage instead. One that had magic schools I did not possess and that also had the spell that hastes a party member. I finally found him.


The mage I found was a level 5 spellcaster called Suela. She mastered spell schools my other mage didn´t possess. I was now ready to look for the monastery somewhere in the north. I did have some rude maps but didn´t take much notice on them until I stumbled upon a man who said the monastery had been overrun and that he was the only one to survive. I could ask about the book of Doom but the man didn´t know where it was. I had no option but to enter the monastery in search of it amongst the evil that had taken over. 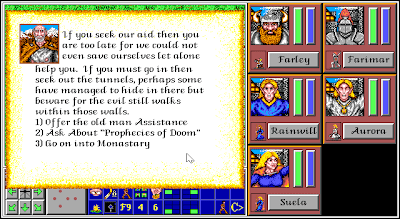 The monastery took me some time to clear since I had to return back to an inn to rest. It is not possible to rest in order to gain hitpoints or spellpoints. I also avoided the harde fights until at the last minute. The monastery contained some fine items and a scroll that said that the book had been delivered to the guardian for safe keeping. So now I understand why the red dragon had it. Anyway, after I was finished in the monastery my group was ready to gain  a level. My next task was to return to the guardian and try to clear out the caves. This was the most challenging task so far. The caves was filled with orcs and bandits but the most difficult fight was against the dark elves. I took me several hours to clear this place.

The most dangerous part in the fights at this stage is that the enemy melee fighters could reach my weak mages in just two turns. I always try to let my fighters kill enemy spellcasters as fast as possible using ranged weapons together with the spell Aynstyne's Accelerated Action which doubles the attacks and movements. However, enemies often comes in sheer numbers and many of the have ranged attacks. I have yet to see anyone striking down my dwarven fighter with over 200 hitpoints, but easily enough one or two of my mages. I haven´t found any good offensive spells for them yet, except magebow which hardly seems worth the effort. Things are not easier with a system that don´t show enemies hitpoints or status in any other way than that you have to use the skill monster lore, something I am quite lazy to use except against single, strong creatures.

It took me at least three sessions to clear out the caves for the guarding. During that time I had to travel back and forth to the nearest town to heal and also loose a lot of time which meant I had to pay the wage for my two new companions. They cost around 350 - 400 gold/week.  I only have 3.000 gold left and I begin to see the need for constant supply of loot and gold in order to keep up. One way is to run from combats until I have found more gold or items to sell. I have begun to sell scrolls which give me some valuable gold as well.

The guardian rewarded me with the book Prophecy of doom, and I returned it to the man requesting it, now living in the city north of the capital. He told me he had no means to translate the text but that he had heard rumours of an oracle that might. It is said this oracle lives in the desert somewhere and he suggested I should look for more information in the village Naedarn. I have no idea where that village could be and now begin to worry how much gold I will loose before I have found my next source of goldincome. Nevertheless, before leaving my mage Rainwill and pries Aurora increased their levels so now we all are at level 5. 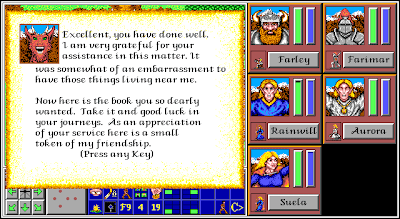 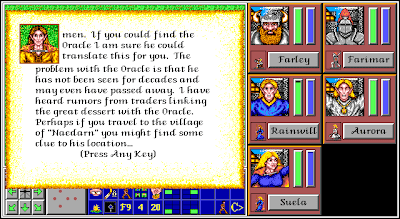 I have to correct myself in my former post. The skill points you earn while increasing level is random, also the amount of hitpoints you get when spending them on the skill fortitude. The rest of the skills increases at fixed amounts based on your attributes.

Before leaving for my unknown destiny I had to sell some stuff and reorganise my items a little. I am still looking for a good thiev but haven´t found any I like yet. I am also not sure I can affor one more right now. Regarding my group I can say the following so far:

My plans are to go west from the capital and see what I will find....