One of the first things I did when leaving the crypt in my last session was to recruit my first npc hireling, a level 4 fighter. I let him take parts of my loot to equip himself and then bought some more. I have to pay him around 100 gold/week but I haven´t found an easy way to keep track of the days or time yet. It seems night and day cycles only occur on the overland map. I don´t wan´t to risk loosing most of my money to pay up for my hirelings this early in the game before I know how hard it will be to get more money. 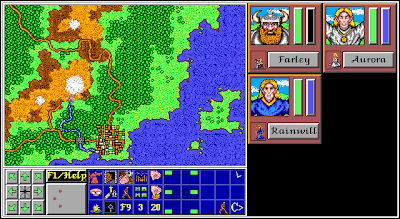 I returned to the burned out houses in the south of the city which was obviously a thieves den. This part was quite hard and just after two combats I had to retreat in order to rest at an inn. I haven´t found a way to camp underground yet and I am not sure that is possible either. What I did find out though was that if you are using a light source of some sort, not only does the explored parts of the map stay that way when you reenter the complex, but it also radiates several hexes in each direction. This was a much improved experience of how I perceived this in my first post.

This game is pretty strange because you could run from combat and you will almost always succeed in doing that (just like in Legend of Faerghail). Each of your character has the option to run and if one succeeds, all retreat from combat. If all fails that means the enemies get one round to close in but that happens very seldom and the worst case scenario is that enemies might shoot at you with ranged weapons or magic in the first round. A cheap cost to pay in order for a retreat. I haven´t found any mandatory combats so even if the encounter suggests it is a boss or leader you can flee and they will never leave any items. I don´t like that design decision but let´s see if there are any mitigating circumstances for later on.

I used this system to my advantage to only take fights that I knew I would win or that I felt would give me much needed experience points. Or I would put myself in a position where the tactical map would be used to my advantage. But they where pretty far from each other and instead I used this opportunity to look for treasure in hope of getting more powerful weapons and armours. 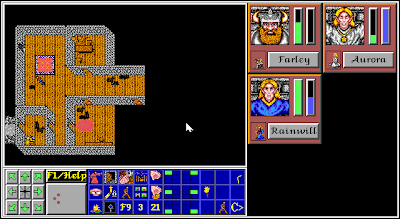 The den was pretty large. Stretching several screens in every direction and with two levels. It is pretty hard to see items laying around except for chests so it is easy to miss out things unless they are on a table to begin with. Your first three characters are also checked for perception now and then in order to discover secret doors or find traps. 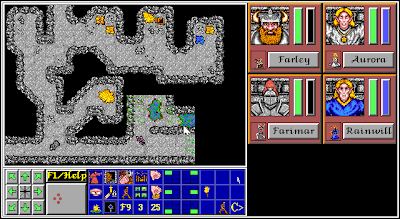 After struggling through this den for an hour and plundnering it for all valuables in chests while trying to find secret doors and avoid any traps, I finally found a room containing the painting I was looking for. It wasn´t easy to see. Many rooms have furniture but it is hard to see if there are items on them.

Anyway, I next had to backtrack my way to the exit. This time I could afford to get into one or two fights and the help of my second warrior Farimar did much to improve my combat skill. I have equipped both my fighters with improved long bows and they are quite adept with those. At least they get a chance to strike one time before the enemies have reached melee and they are perfect to take out mages lurking behind the enemies. 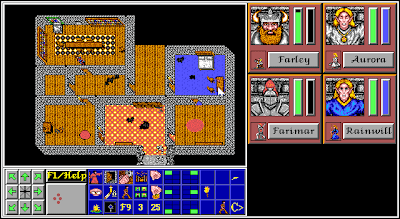 Anyway, when gave back the painting the man told me that he did not have the book of prophecy but knew that monks in a monastery far to the north would have it in their possession. So much for my hopes of progress in this town. I reequipped myself for venturing overlands and carefully outfitted my group. I had enough experience to gain one level each. At this point you are taken to the character screen where you could spend a fixed amount of skill points on skills of your choosing. I continued to spread the skills so that my priest would be the best trader, my mage the best reader of scrolls, pick locks and disarm traps and my fighters to travel through mountains and fighting. You are not given more hitpoints. You have to spend skillpoints into fortitude to gain any and these are totally random which makes reloading quite attractive.

I had found a lot of gems of different sorts (sapphires, diamonds etc) which I belive is only used for selling since I haven´t found any use of them. They gave me much needed money to buy a power ring which gives a stunning +10 shots with the longbow amongst other boosts. This really helped up my coming combats.

What I soon discovered was that I had totally underestimated my mage. I hadn´t notice he could choose from different spellbooks when his casting sheet is on display. Now I let him get a spell school where the first spell is like a haste in AD&D. It will double up my melee attacks and movement points for the character who receives the spell. This has greatly improved my combat abilities. 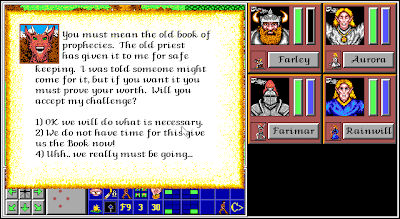 I went to the north and soon entered the mountains. After some explorations I came across a red dragon. He said he was a guardian of this place and was in possession of the the book prophecies of doom and also revealed that it could be mine if I did a favour for him. Clearing out the nearby caves. Hmm...I wonder if he actually have the book or not. Someone must have been lying to me unless it is supposed I am to get to the monastery first only to find out it has been stolen by the dragon or whatever.


I just make a short visit to the caverns to find out about the opposition. I had no intention to undertake this mission right now and so instead opted to clear out some bandits hiding in the northwest. That would yield me 1.000 gold in reward. The cave wasn´t that hard to find but it was full of traps which made it hard to navigate. I carefully choose to battle a few of the bandits in favourable positions but otherwhise elected to explore the whole cave first and gathered some good armour to improve my armour ratings. 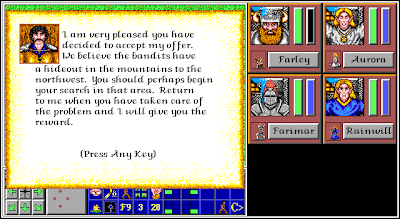 I had run from several fights and in the end when I had finished exploring the caves they where suddenly gone. I suspected I must have wiped them out but when I returned to the village from where I got the mission he said that there where still some bandits living. I thought this might have been a bug so I reloaded my game from the cave and also restarted the whole game but still no encounters anywhere in the cave. I don´t know if I am supposed to find more caves or bandits outside of the cave to finish the mission. I left it as it where and travelled westward. 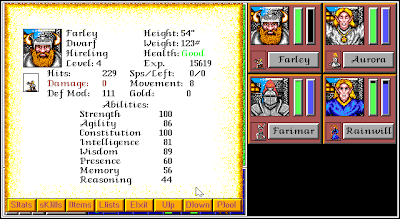 There I came upon a small village that where troubled at night by creatures coming from the woods. I explored the wooden region with a small cemetary and found a way down. There is where I am right now. I was startled to get into a fight with the first encounter of a Minotaur. He took tremendous amount of damage before he died and failed to injure me. Now my explorations will continue from here. 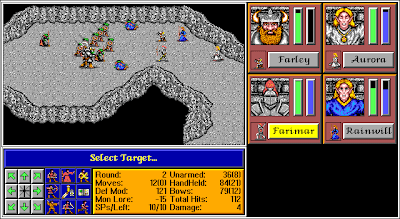 I have taken a close look at the XP gained from combats. It is not very much. Perhaps you get 200-300 xp per fight at this stage and you need at least 5.000 xp to reach a new level for the time being. That means I have to do a lot more fighting in the game.
Upplagd av Saintus kl. 10:14 PM