Anvil of Dawn - Nearing the end

I entered the Land of roots, a level built from a large tree it seemed. This complex clearly showed that the difficulty of the game was rising slightly. Not that the enemies themselves were any harder than before. They mostly consisted of poisonous creatures of different kinds. The difficulty lies in the amounts of teleporters and preassure plates that are required to be bypassed and solved before progressing or getting important items. I mapped the whole first level until I took the stairs above to level 2. I had to fight my way through very small levels until reaching the top of the tree. There I met some sort of tree creature that told me I should try help to heal the tree roots of this tree. In return the tree would stretch itself to allow me to cross the chasm on the overland map. I agreed of course and was given a special healing staff that increased my healing spell with 100 %.

The only problem with the thing was that I had already found several roots while mapping out level 1 but didn´t understand what to do with them them. Now I had to backstep my way to all those places. Luckily I had taken notes of the places I´ve found beforehand but I didn´t know how many roots to find. I am not sure I did find all hidden places on the first level but I did heal 6 or 7 roots. I did not get any message or anything that told me the tree was completely healed. 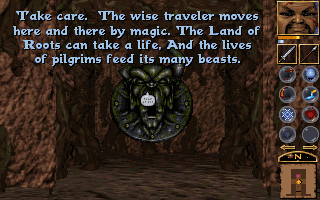 Meanwhile, I met some sort of mage in the tree complex who not only teached me a new spell but also spoke about the Amber Dragon in this place. Not knowing what a dragon would have to to with the whole thing I eventually had to look for it when I didn´t have any more places to search. The dragon just came through an opening in the rocks and left some amber behind. I picked some up but they soon dissappeared but I did find an ember container to and put some new amber inside there. I have no clue what to do with it but suspect this is yet another part of the demons ingredients.


Anyway before leaving this place I had the uncomfortable feeling of not having completed the request of the tree but I just didn´t find any more roots to heal. Besides, I did got the amber which seemed important. I left the complex. I returned back through the underground city and the barrier and headed up for the mountains. There I encountered a crucified a soldier and found a secret place behind a waterfall. The waterfall was the residence of a mage that gave me another spell.

Actually I never found the chasm and I believe I should have kept looking in the immediate vicinity of the elder tree. As it was now I headed straight into the Gorge Keep, a place that still haunts my bones when I think about it. It was like a large fortress that blocked my way forward.

Right after entering into the mainhall I was assaulted by at least 10 goblin riders. With the fear of being surrounded and unable to move I just tried to run through them. I managed to squeeze myself out in the north section. This section was divided into about 10 segments, each had to be passed and was blocked either by traps, foes, disorientation squares, or rolling blocks of stones. I pressed forward and finally made it to the end. I thought I had just run through the keep, but the portcullis and gate wasn´t opened. Argh, I have to find a way to open the door which meant I had to return to the large hall with all the goblin riders and try to find another exit.

I returned back and found other escape route that led eastward and I had to fight three Goblin riders in a row when entering. The good thing was that all the goblinriders in the hall didn´t follow me. I quickly discovered the importance of my magical spear. I first freeze the goblin rider then throw the spear on it. If I am lucky the rider is killed in one hit. If not, I just repeat. At most they can take 2 or 3 hits from the spear before dying. The spear was really my saviour in this complex and by fighting in corridors with one goblin rider at a time I felt victory coming. At least on the battlefield.


While searching the east side of the complex I came upon a cell with a man frozen into an ice cube. I had no way to communicate, let alone save him in any way. I tried all my fire-based spells first and the the ordinary spells without much effect. I had no special item that I could think of could affect this situation. 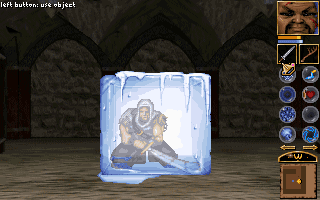 I continued and finally found the room with the door that seemed to lead to the place where you could open the gate. I still lacked the key to that room though and had to return to the west side of the complex. All the time I had to fight through hordes of goblin riders and ordinary soldiers but perseverance kept me above the waterline. After having cleared the place I did not find the final key. The only thing unanswered was the man in the icecube. I had to check for a solution here. The solution was to put down some amber I´ve found on this level on the floor beside the ice cube. It then begun to melt. I had already tried to use the amber but on the cube itself to no effect. This is a kind of problem solving that I hate. You use the correct item in the correct place but the game only allows you to use it in one specific way.

Anyway, I managed to get out of this place soon after and I rushed forward into the unknown. I begun to get the feeling of nearing the end and final solution to all of this when I entered the Titan caves.

This new complex contained a lot of puzzles. The main problem of this 3-level complex was that a man had been enlarged so much that he blocks the way and spans three levels in height. In the first puzzle I had to put blocks into four separate preassure plats that enabled four teleporters to be visible. Each teleporter led me to small separate areas with a preassure plate. I had not enough items to press the four preassure plates down but I could use four stone blocks by moving them into the teleporters to the small rooms and from there move them on the preassure plates.

That opened up a way to meet the enlarged man in the first place. However, in order to shrink him again, I had to use a dispel magic cube. The problem was that the zone in which I am standing is an anti-magic zone so this doesn´t work. I have to solve the rest of the complex to find a lever that inactivites the anti-magic zone and then I could dispel the magic and pass him.

This formula is at use for the next two levels as well. Find the other sections of the man protruding from the floor or ceiling and find a way to remove the anti-magic zone. After a few hours I managed to solve this complex but at least in one place I was not able to open up certain doors. However, after I had finished I was able to travel outside to the other side once again.


My journey in the overland took me to the next place called The Quagmire but more of that in my next post which I hope will be the final one.