I don´t think faith wants me to play Abandoned Places. I got so frustrated with the game that this revisit will probably only containing this single post.

I owned the game once for my Amiga. I don´t remember much except for two things. Firstly that the music was great and secondly because I got stuck very early in the game. I don´t think I´ve even got out from the starter dungeon because I don´t remember the overland map.

The game comes on 5 discs and I am using WinUAE to run it. Apart from the slow loading times (I have no idea how to install it on harddrive), you can only have on save per disc and you can not load a new saved game from within the game. You have to quit to get back to the main menu which takes a few minutes until you are back in the game again. That sort of patience does not exist in 2012.


Abandoned Places: A time for heroes was released in 1992 for the Amiga by one of the early east-european developers called Artgame and published by Electronic Zoo. It is a huge game  complete with manual and a large overland map. On papter, it has all the ingredients for me to be a great RPG. 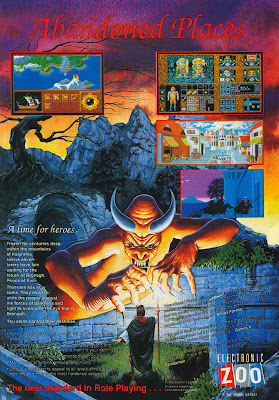 Twelve heroes are trapped in stone. Now the land needs them again but the power is only enough to revive four of them back to flesh. Two warriors, one priest and one magician. The four must return to defend the land Kalynthia from the evil Bronakh. That is the short version of the story.

You select the four heroes from twelve different pregenerated characters, all with their own unique abilities. I started to write down every characteristic before I selected my four characters. The only way to do that was to start three different parties and load up the game. There is no  other way to find out their characteristics. The result of my findings could be seen here:

After carefully analysing starting health, magic points and especially starting spells, I selected my party. We started out in some sort of dungeon. Within some steps from us, three brown winged creatures approached and started to attack us within a minute. I managed to take them out one by one by casting mage bolts at them.

Attacking is done by right-clicking the hands of your characters just like any other similar game. The two front characters are the only ones that can use melee weapons and the two at the rearcould use ranged weapons or spells.


By having a very small 3d-view area, all information neccessary could be fit into the same screen. There is no other screens or character sheets in the game. By selecting the character (a green rectangle indicates which) you could traverse through each and every ones inventory and characteristics.


You need food in order to survive. Hitpoints and Action points (for warriors) or mana for priests and mages regenerates over time. You could rest but only if you feel exhausted. The drawback is that you will consume food during the time. I choosed a priest that could create food as a starting character. 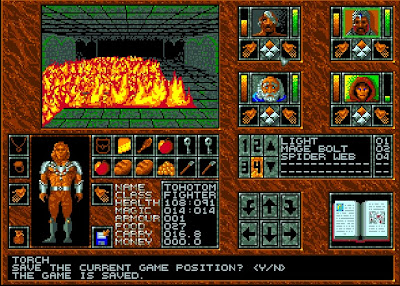 The first complex spanned over a few levels. The last part was in the underground with skeletons roaming the corridors. Keys where needed to bypass certain doors and most of them could be gained by slaining them. There where at least a few places in which you had to find a lever to pull to open up a secret passage. That part eventually led me to freedom. Or at least above ground to the overland map. 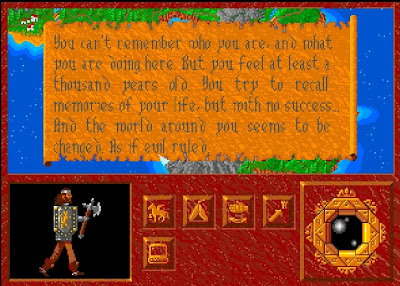 When travelling on the overland map you are presented with a totally new interface with a lot of icons symbolizing different actions you could take. For example, you could travel by walking, ride a horse or take a boat. You could post guards during your camp for the night and always use your warriors to scout ahead to minimise the chance of being surprised by monsters but for the price of slower progress.

Shortly outside the tower I found a group of horses that increase our overland speed. Since we started out on an island my only goal was to make it to the mainland. Note that we had not found a single information yet of what to do or why.

In order to do so I had to wait for a boat to dock at some part of the island and then use it to be transported. After struggling with the interface in order to move at all and to where I wanted, I finally made it to the boat and transported myself over to the mainland.

At the first town I arrive in, Frampton, I had the chance to go to the temple to be healed or raise a dead character. Neither was interesting for me since it would cost a lot of money and I wasn´t that injured at this stage. It was only to move on to the next city Kemlish. But it was the same thing there.

I spent the next hour travelling around the mainland, visiting new cities or places but in most cases the guards would demand money for me to enter or there where nothing to do in the cities. I even travelled to another island far to the west in hopes of entering some place or trigger some adventure hint, but to no gain.

When I got tired, I actually tried to pay the guards. I had found gold after all. But it turned out that since I hadn´t put the gold into my pouch I couldn´t use it! The only way you could put the gold into the pouch is from the view when your are in 3d-view with your party, which only happens underground. I got really, really frustrated by this. I don´t have the patience to return back to where I came from just to put a bag of gold into my pouch. I was about to give up the game by now.

This revisit could have ended here. After a day or so I had regained new strength to let the game prove to me it is worth replaying again. I returned to the game and restored an old save game backup-disc just prior to exiting the starter dungeon. I made sure I put the gold bag into my pouch and received some golds by doing that. Then I repeated the tedious travel again from the island to the mainland and from there to the Abbey in the west. They requried money and I paid it.

The priest told me that in order to trust us and to prove ourselves he wanted to test us by sending us to a dungeon to clear it of monsters. Now things started to get interesting. We where again in a dungeon. This time full of walking zombies, underground lakes and seas of lavas.


There is no automap in the game and I am too lazy to draw my own maps, especially in a realtime where my party needs food to survive. So i tried to memorise everything in my head and work methodically through the dungeon. It quickly turned out to be much larger than I would have anticipated and a lot harder too.

First, there are locked doors here and there as is usual. They can only be unlocked by keys you get from either killing a monster or find at some hard to reach place, like after swimming through water, or finding a secret passage by pressing a button somewhere. It is not easy to distinguish buttons and levers on the small graphical window. After 15 minutes I thought I had got stuck. I could not move on. I had checked almost every wall piece and found nothing more to go on and yet there where doors I couldn´t open. By pure luck I clicked the right brick in a wall that turned out to be loose and revealed a hidden passage for me. I was able to continue for a while.


Some reflections on the game so far:


I like the game but it is very hard. The major problem right now is to find a way out of this dungeon at all. The second problem is to keep the food level on an acceptable level because when you start to starve you loose hit points. I returned to the daylight again and the priest reported that there are still monsters alive that must be killed before I have completed my task. I had to get down there again. At least I knew I could get out from there to fill my food supply. The problem is that there is nothing to buy at this place.

Future will tell wether I could endure the long loading times. The worst problem is that to reload a game you have to exit to main menu first which takes at least 1-2 minutes of floppy changes. I don´t have that kind of patience right now so I might just leave this game here....or not. I´ll decide later. It sure does have potential, I just don´t want to look into walkthroughs too often. Then it is better not to play the game at all.
Upplagd av Saintus kl. 9:30 PM