Just when I thought I would get stuck in my first test with my party, I managed somehow to find the last door to open. That led me to an illusionary wall with some hidden zombies. They where an easy match and after that I returned to above ground again to hopefully receive the news that I had completed my trial.

The priest was satisfied and my first real assignment was to locate the book of worlds in the library at the capital Kal Kalon due east from where I was. I was happy to get a good direction and a start of my adventure. We travelled day and night and after a few days we reached the new city.


The librarian allowed us to search the library for the book and we gladly accepted and stepped down the stairs. New graphics met us in the library. It contained a lot of cupboards and a few chests apart from long corridors and rooms with bookcases. Most of them where filled with useful things like food, healing potions, gold and a few important keys. The amount of items spread out was real gameplay booster at this stage and I enjoyed every second of the exploration. After some time I had searched through everything I could find in the library except for one locked chests and two stairs leading downwards.

The library did not pose any serious problems for me to explore but when going down the stairs to the dungeons below, my problems started. I really like the puzzles and obstacles presented in the game. They are not as straight forward and easy as in Anvil of Dawn. You could find buttons or keylocks that you press or unlock but cannot see an immediate effect. Sometimes a wall has been removed, a door opened or something like that. Other times you will never really know what happened and that makes the game so hard if you get stuck.

We came across some sort of plant growing from a chestlike container that blocked our path. I tried to use every item I had found so far on the platn, including to burn it with my torch, hack at it or giving it some items or potions. I just couldn´t figure it out, until I remembered that my fighters have skills such as pull and push and of course it was pushing it I was supposed to be doing. I pushed it forward until my sides opened up, but they where blocked by spiderswebs impossible to pass.


Here I was stuck again, trying to burn them, hack at them and so on. The only solution was for me to throw a spider web at the same place and wait for my web to dissappear. That would make the other magical web dissappear as well. This would finally lead me forward in the dungeon. It is problem like that this game is about. The fights are not the challenge it could have been and I am glad for that because the problems is always to find a way forward. 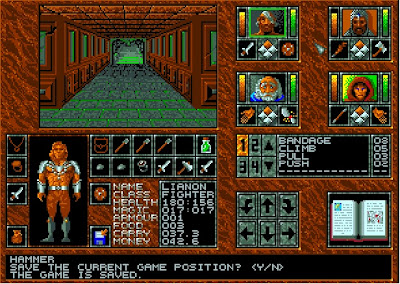 The dungeon layout was well laid out and contained several illusionary walls that contained very good items like better weapons (schimitar) and shields, together with gems, food and torches. It was really fun because you had to bypass fire lava or swim across water to get hard to reach areas. But it was always worth it. I reached a point where I couldn´t continue anymore but I still had one key left. I remembered the chest in the library and returned there and could now successfully open it. It contained more useful keys and items that let me continue in the dungeons.

After some time I finally found the last room that contained a chest with the book of worlds. Yes! I made it back to the librarian but he still told me the book was in the library so I wasn´t sure I had really got it. But after equipping the book with the same result and with nowhere else to explore, I returned back to the Abbey and there my finding was confirmed. I had found the book. 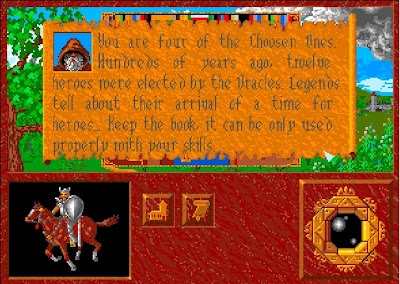 Now I was credited as being the true heroes from the past and was sent to regain an important scroll that would be somwhere near the Steps, a mountain range. I did some shopping before leaving and begun my search eastwards using the inscanned overland map you see below.


But this turned out to be a showstopper. I have searched every pixel, fought many random encounters and still haven´t found anything there. I don´t know where else I could go. I am stuck in the game and unless you readers out there know where I can find the scroll I will not be able to continue my adventure for now. The red circle below indicates the area called The Steps.

And yes....I have searched the internet but not found the solution of how to find this place unfortunately. There is only one walkthrough out there and it doesn´t say how to get to the place. I really begun to like this game and would hate to stop playing it.